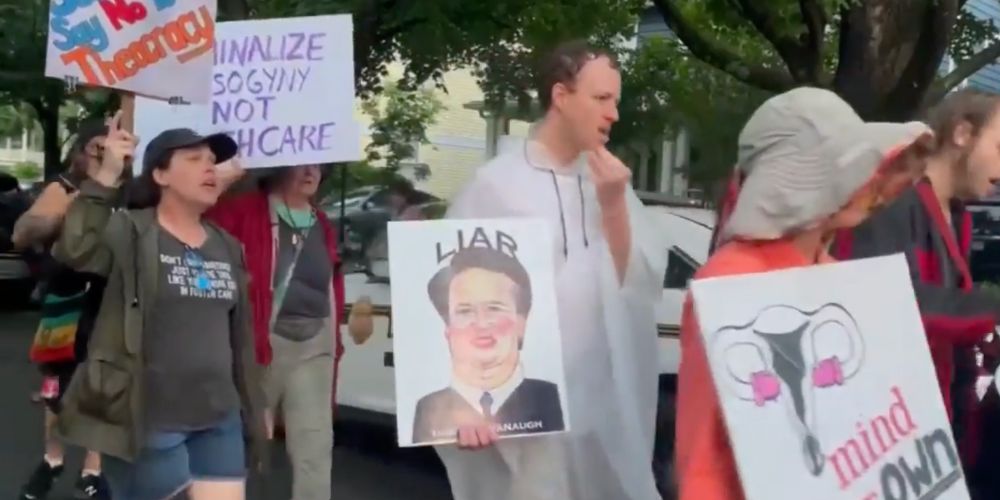 Video from Fox News shows the organizing group, Downright Impolite, marching in circles up and down Kavanaugh's street while drumming and shouting in often indecipherable cries. The group took to Twitter to thank Fox News for the "high quality video."

Downright Impolite describes themselves as "making some Good Trouble, rising up for our f’ing basic human rights, and not going down without a fight!" Their pinned tweet lists an address near Kavanagh's home address along with a call to protest.

The group's mission is aligned with the pro-abortion group, Ruth Sent Us, which planned and announced protests in May at the homes of Justices Amy Coney Barrett, John Roberts, Samuel Alito, Brett Kavanaugh, Clarence Thomas, and Neil Gorsuch.

The Ruth Sent Us protests were sparked after the May leak that revealed the Supreme Court's potential plans to overturn Roe v. Wade. Since the leak, conservative SCOTUS justices have been consistently targeted by pro-abortion groups. Top democratic lawmakers have encouraged this behavior, including President Biden, House Speaker Nancy Pelosi, and Senate Majority Leader Chuck Schumer. Schumer faced backlash recently for previous comments he made stating that Kavanaugh would "pay the price" if he didn't change his mind on Roe v. Wade.

Among Downright Impolite's protest wailings outside of Kavanaugh's home were calls and responses of:

Members of the "activist rock band" The Resistance Company brought a "hubrid snare/tambourine… to help amplify for #WomensRights [f*ck] the christian fascist #SCOTUS."

Similar messaging targeting Kavanaugh's Catholic beliefs permeated the protest including the chants, "Keep your rosaries - off my ovaries," and "Keep your religion - out of my vagina."

According to federal statute, it is illegal to protest outside a judge's home with the intention of influencing a future decision.