"Because SCOTUS overturned Roe v Wade, we cannot take the risk of an unintended pregnancy, therefore, we will not have sex with any man — including our husbands — unless we are trying to become pregnant." 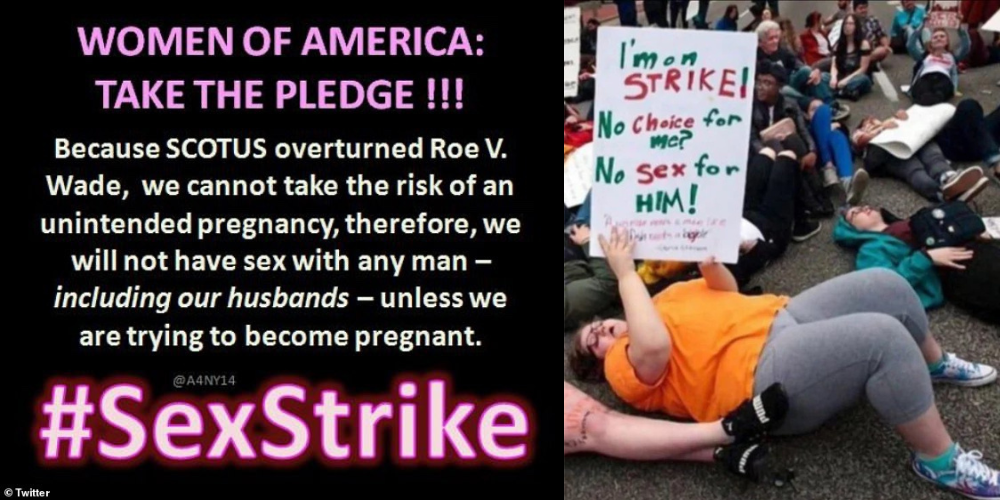 In response to the Supreme Court’s decision to overturn Roe v Wade on Friday, pro-abortion activists are threatening a "sex strike," vowing to remain abstinent until the ruling is changed.

According to the New York Post, the hashtag "sex strike" was trending on Twitter on Saturday, with pro-abortion women stating that they with withheld from participating in sex because they "cannot take the risk of an unintended pregnancy."

"Women of America: take the pledge!!!" one post circulating on Twitter read. "Because SCOTUS overturned Roe v Wade, we cannot take the risk of an unintended pregnancy, therefore, we will not have sex with any man — including our husbands — unless we are trying to become pregnant."

"Women have the power here," another woman wrote. "No more sex until abortion rights are federal law."

Speaking with the New York Post, one woman said if men aren’t getting vasectomies, they don’t "deserve" to have sex with her.

"If you’re a man who won’t get a vasectomy, even though it’s reversible, and you’re not out in the streets fighting for my rights, you do not deserve to have sex with me," said Brianna Campbell, a 24-year-old EMT.

Another woman, 22-year-old event coordinator Caroline Healey, told the Post that that it’s "absolutely valid" for women to withhold "the Holy Grail that men seem to think is most important."

"Why shouldn’t we withhold it if we’re always worried that they’re not going put a condom on, that they’re going take one off after we ask them to," she added. "If we can’t safely go out and have sex and know that we will have a choice after that, then why should we be expected to?"

At one point on Saturday, "abstinence" was trending on Twitter, garnering more than 26,900 tweets as of that afternoon.

Another tweet from actor and activist Alyssa Milano, which was originally posted in 2019, recirculated on Saturday, with Milano stating, "our reproductive rights are being erased. Until women have legal control over our own bodies we just cannot risk pregnancy."

"JOIN ME by not having sex until we get bodily autonomy back," she continued. "I’m calling for a #SexStrike. Pass it on."

Another Twitter user said that those who are celebrating the overturning of Roe v Wade can, in the literal sense, "go f*ck yourself."

Others on social media though pointed out that participating in such a sex strike would eliminate the need to get an abortion altogether.