Protestors chanting "Let Kyrie play" attempted to push their way into the center at around 3 pm Sunday, as fans were beginning to filter into the building for the 4 pm game against the Charlotte Hornets. 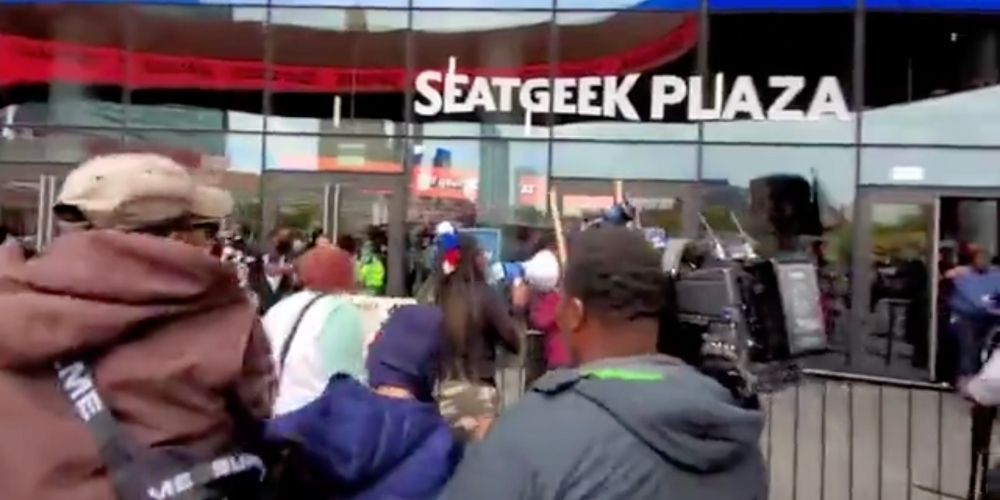 As the Brooklyn Nets prepare for their home opener at the Barclays Center on Sunday evening, the team will be doing so without star point guard Kyrie Irving, a fact that has many fans angry and protesting the move.

Ahead of the game, fans have stormed the center, demanding that the Nets player be allowed to play, despite vaccine rules not permitting him to.

Protestors chanting "Let Kyrie play" attempted to push their way into the center at around 3 pm Sunday, as fans were beginning to filter into the building for the 4 pm game against the Charlotte Hornets.

The supporters broke past barricades and then stormed the doors of the Barclays Center. Members of the crowd made a rush for the doors of the arena as staff and security rushed to secure the area and quell the chaotic scene unfolding.

According to Newsday reporter Greg Logan, Barclays Center personnel and police were able to get the situation under control at around 3:30 pm.

Irving has been vocal about the personal choice behind getting vaccinated, telling followers on Instagram Live that he would not leave the sport despite the vaccine mandate currently in place in New York City.

"I am doing what's best for me. I know the consequences here and if it means that I'm judged and demonized for that, that's just what it is," Irving said, according to NBC4. "That's the role I play, but I never wanted to give up my passion, my love, my dream just over this mandate."

Irving cannot currently play in New York City games due to the vaccine mandate currently in effect, requiring vaccination to enter most buildings, including sports venues.

Irving is currently suspended from the Nets, with Nets management saying "given the evolving nature of the situation and after thorough deliberation, we have decided Kyrie Irving will not play or practice with the team until he is eligible to be a full participant."