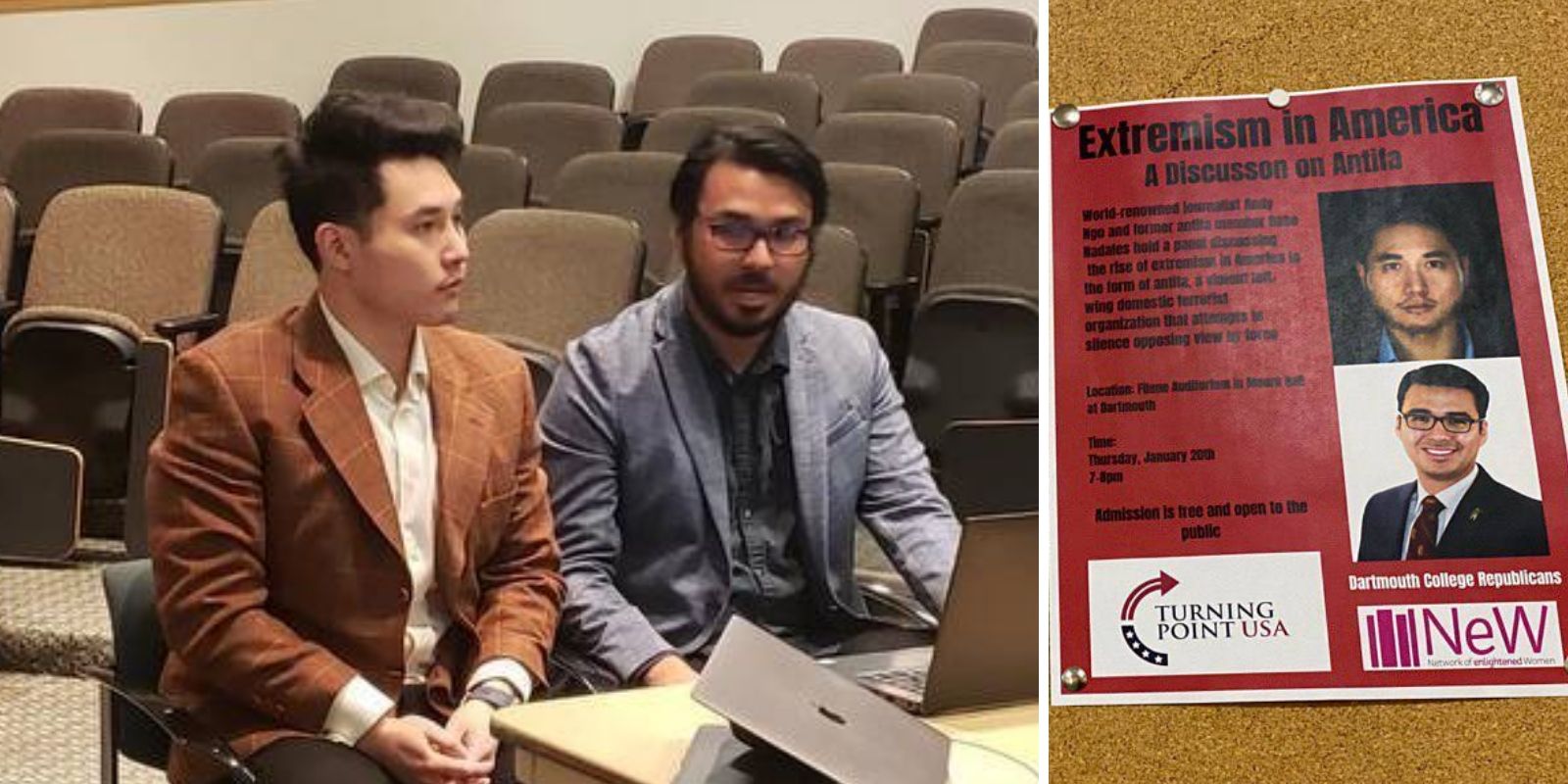 Andy Ngo was scheduled to speak at Dartmouth College in New Hampshire on January 18, but that engagement was cancelled at the last minute and held online due to what the university called "concerning information" received from the local police department. But what FIRE found upon a public information records request was that Dartmouth essentially cancelled the event "by enacting an improper 'heckler's veto'" that acceded to the illiberal demands of Ngo's ideological opponents."

When FIRE reached out to the local, Hanover Police Department, they discovered that the police did not recommend the event be cancelled due to the information they had from online activists. These threats provided by the police, FIRE notes in a letter to Dartmouth, "document social media controversy that does not differ significantly from the posts" leading up to the event, as in, there was no change in the known threats on January 20 to warrant a change of venue.

"Those records suggest that the sum total of 'information' provided by the police to Dartmouth on the afternoon of January 20 consists of social media posts that, whole concerning, constitute messages that endorse—but do not threaten—violence against Ngo," the letter from FIRE to Dartmouth reads.

"If these messages were interpreted by Dartmouth as threats, they were not reported as such to any of the law enforcement agencies reported to be involved in the Ngo appearance," FIRE writes. "Moreover, the Hanover police records consist of information provided by Ngo himself."

Local law enforcement was aware of the event, the online chatter about threats, and was prepared to handle security. Dartmouth forced the student group hosting the event, a TPUSA chapter, to move the event online.

That letter from the Hanover Police Department in response to FIRE reads: "Hanover Police did not make a recommendation to Dartmouth College regarding the January 20th event."

A new letter from FIRE, after research into the "concerning information," brings concerns that the school bowed to online social media musings and squelched the very principles it claims to uphold.

"Records of police communications to university administrators describe online posts about mythological Antifa supersoldiers," FIRE writes, "opposition to Ngo’s views, and some discussion of violence, but no explicit threats of harm to Ngo or students. If such threats did exist, Dartmouth has not shown them to the student organizations, FIRE, or the general public."

Dennis states that the Hanover Police Department was "operationally prepared as best we could to handle the event and protest," but that they were informed near 5 pm that the evening's talk, "Extremism in America, a Discussion on Antifa," hosted by TPUSA, had been moved "to a virtual platform."

Dennis states that the police department was "not provided with a reason or reasons for Dartmouth's decision to transition to a virtual platform..."

"When faced with illiberal attempts to use violence to squelch speech," FIRE writes, "a commitment to expressive freedom requires universities to address the disruption, protect the speaker, and ensure that events can go on as planned, Dartmouth did the exact opposite — punishing the student groups by altering the venue and format of their event at the last minute despite no evidence of severe disruption, and law enforcement’s extensive preparations to ensure public safety."

Dartmouth is not unused to controversial ideas on campus. As alum and attorney Harmeet Dhillon said, when she was at the university, there were "literal Sandinista fellow travelers and Marxists on the faculty."

In their letter to Dartmouth, FIRE said they have concerns "that Dartmouth's decision to require the event to be conducted online, rather than in person as originally planned, was not justified by the potential security risks— risks that ultimately did not materialize—posed by those opposed to Ngo’s appearance."

"Dartmouth's unilateral decision, despite law enforcement's efforts to ensure the event could proceed as planned," FIRE continued, "materially altered the venue and format of a student group’s event in violation of students' expressive freedom. It also incentivizes similar threats to expressive activity in the future."

FIRE notes that Dartmouth claimed that they had cancelled the event, moving it to a virtual one, after "'concerning information' from the Hanover Police Department late that afternoon necessitated the decision."

"That assertion is difficult to square with the Hanover Police Department's version of events, and with information contained in public records provided upon request from FIRE," FIRE notes.

After Dartmouth's actions, many came to Ngo's defense, including Greg Gutfeld, who said "It's so obviously ironic, an event about leftist violence canceled over a threat of leftist violence."

PEN America CEO Suzanne Nossel also gave her support for Ngo's right to speak, saying "No matter what you think of [Andy Ngo's] views, if he was properly invited to speak [at Dartmouth] it would have been better to allow him to proceed, with adequate security. It's possible-and better-to forcefully protest a message without silencing it."