A raptors fan has been charged with mischief by Toronto police after delivering profane comments on television about Golden State Warrior Steph Curry’s wife. 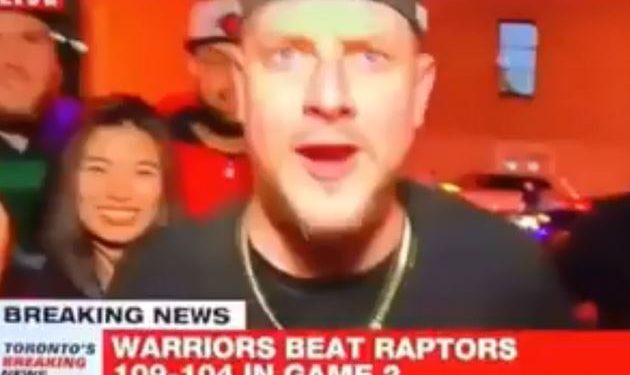 A raptors fan has been charged with mischief by Toronto police after delivering profane comments on television about Golden State Warrior Steph Curry’s wife.

In a CP24 live broadcast 28-year-old Tristan Warkentin said: “I just wanted to let everyone know: Ayesha Curry, we’re going to f—- her in the p——.”

After being contacted by the Toronto Sun, Warkentin has been apologetic for his remarks.

“What I did was disgraceful; it was an alcohol-influenced situation,” said Warkentin. “To be honest, I don’t even remember being there but I am responsible for my own actions at the end of the day.”

According to Warkentin he intends to apologize to Curry and his wife for his behavior.

Warkentin is expected to appear in a Toronto court on July 13th.

With multiple other arrests now occurring following each recent historic Raptors victory, what do you think will happen in Toronto if the team wins game five?