If the members of the Lincoln Project, a super PAC, are Republicans, it is, as the term goes, in name only. The framing of these hoaxters as Republicans is a diversion from the truth. 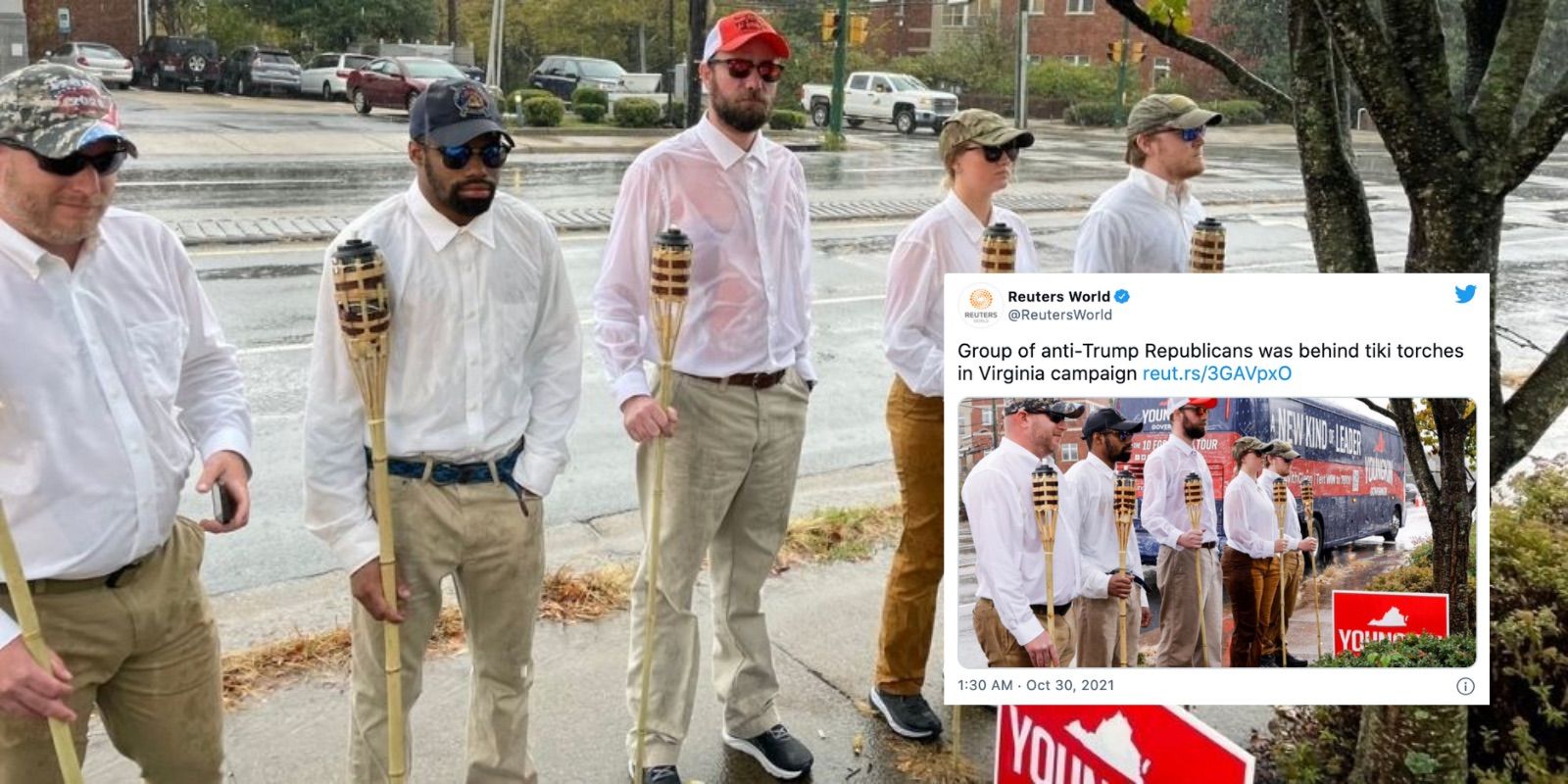 After it was revealed that tiki torch-bearing "white supremacists" at a Glenn Youngkin campaign event in Virginia were actually young Democrats who took up the task at the purported behest of the Lincoln Project to back opposition candidate Terry McAuliffe, Reuters reported that Republicans were behind the hoax.

These so-called Republicans are purportedly part of the "Never Trump" Lincoln Project. Never Trumpers, as they are known, are less Republicans or conservatives and more interested in backing Democrats who support an anti-Trump agenda than actually upholding conservative values. They are willing to back progressives rather than see anyone who doesn't hate Trump in ascendancy.

Photos of "white supremacists" at the Youngkin campaign event in Charlottesville, Virginia, surfaced on Friday, but Twitter researchers made short work of uncovering the true identities of the tiki torch-wielding activists.

The five, dressed in khakis, white button up shirts, and baseball caps, were costumed similarly to those who attended the infamous "Unite the Right" rally in 2017 in that city, during which a young woman tragically lost her life.

One of those present, Camden Layton, was the finance director of the Virginia Young Democrats and part of a Virginia Democrats group at George Mason University, as is another member of the group, Colleen Wachenfeld.

If the members of the Lincoln Project, a super PAC, are Republicans, it is, as the term goes, in name only. The framing of these hoaxters as Republicans is a diversion from the truth, which is that the fake white supremacists were staged by McAuliffe supporters seeking to discredit Youngkin and frame him as a racist.

Reuters reported on the Lincoln Project's having claimed responsibility, which they did only after it was revealed by researchers on Twitter that the five people standing by Youngkin's campaign bus were not Republicans, or conservatives of any kind, but leftists trying to cast a racist lens on the GOP contender.

The Lincoln Project released a statement that read that their intention was to link Youngkin to Trump, and remind voters about the Charlottesville protest in 2017 during which a young woman was killed when she was hit with a car.

McAuliffe's campaign denied any role in the hoax, saying "The Democratic Party of Virginia, along with its coordinated partners and its affiliates, did not have any role in the events that happened outside of the Youngkin campaign bus stop today."

Unable to get any evidence or truth behind their claims that Youngkin is that ultimate bad guy among bad guys, a racist, the Lincoln Project, with or without the knowledge of the McAuliffe campaign, seemingly staged a bunch of fake racists at a Youngkin campaign event to sully him and cloud voters' impressions.

The Lincoln Project is a group of former RINOs who used their hatred of Donald Trump to inspire them to commit to actions like this one on the Youngkin campaign. Their goal is to defeat Trump using any and all means necessary.

The group came under fire in 2020 for alleged sexual misconduct with minors. Former members of the group called for the Lincoln Project to shut down in light of these allegations, with former senior advisor Kurt Bardella saying "just shut it down already."

After that, two former interns of the project revealed lurid text messages sent to them by Weaver. Weaver is no longer with the project.