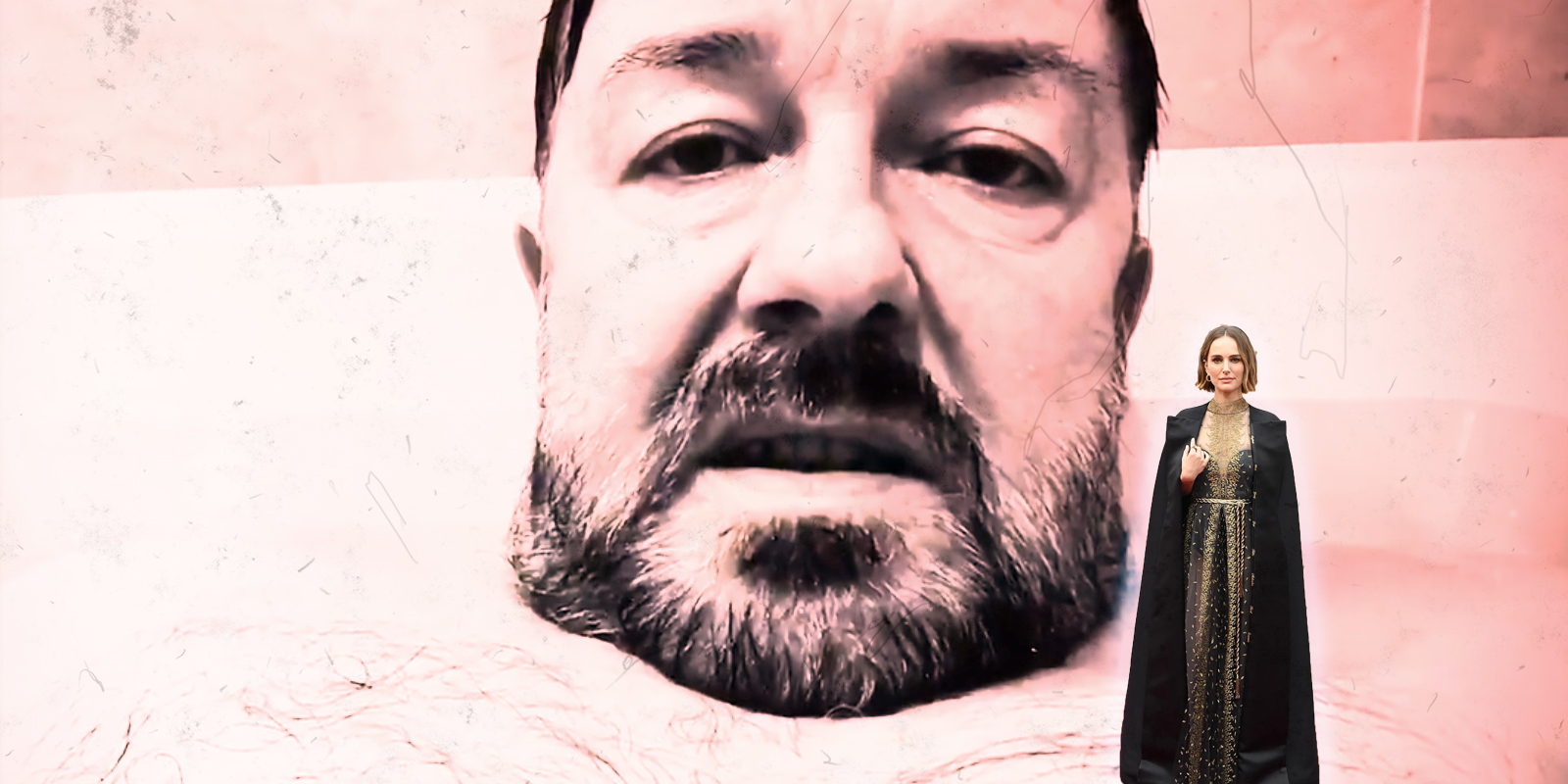 Ricky Gervais reclines in the bath in black and white to stage his protest against Hollywood abusers. It is a glorious send-up of Natalie Portman’s pricey Dior frock with golden embroidered names of the women directors who she believes were snubbed by the Academy of Motion Picture Arts and Sciences at the 2020 Oscars.

“Inspired by the brave Natalie Portman and her embroidered Oscars dress, I’ve written on my body all the known Hollywood perverts who haven’t been caught yet.” He points at some sharpie written names on his chest. “He’s a groper, we paid him off. Pedo.” He points to another. “Fuckin’ stick it anywhere. This c*nt is a complete nonce.”

Gervais is a master at skewering celebrity culture, here from the vantage point of his bath. As host of the Golden Globes, he gave voice to what so many viewers were thinking about the self-flagellating stars who struggle to come to terms with their own fame and influence.

During his most recent celebrated hosting gig at the Golden Globes, Gervais shredded the Hollywood elite by pointing out their hypocrisy and letting them in on some inconvenient truths. “Our next presenter starred in Netflix’s Bird Box, a movie where people survive by acting like they don’t see a thing – sort of like working for Harvey Weinstein,” he quipped. When the audience booed, he pointed to them and said, “You did it. I didn’t. You did it!”

Entertainers use their star power to pay tribute to their pet causes, whether they be Jane Fonda staging climate change protests on the steps of the Capitol, or Joaquin Phoenix speaking out against milk, or Portman advocating for gender diversity during awards season. The rest of us wonder why they don’t seem to be taking action in their lives. Fonda has routinely engaged in travel aboard private jets, Phoenix has probably enjoyed a glass of milk or two in his time before becoming vegan, and Portman’s own production company hasn’t hired women directors other than Portman.

This last failing was criticized roundly in the arena of social media. Portman sparked blowback from virtually all spheres after this revelation surfaced, despite the gold embroidered protest cape. To her credit, Portman acknowledged her own failings after actress Rose McGowan pointed them out. “I find Portman’s type of activism deeply offensive to those of us who actually do the work,” McGowan wrote on Facebook. “I’m not writing this out of bitterness, I am writing out of disgust. I just want her and other actresses to walk the walk.”

We’re not sure what work McGowan is actually doing, either. She directed an animated, political film called Pomerania, and she hosted a television documentary about abuse of power in Hollywood, but from what we can tell, she hasn’t been out there advocating for women directors. McGowan falls into the trap of believing that if a person is taking action against one injustice, it’s not valid unless she takes action against all the injustices at once, which is also the same as doing nothing.

Gervais pointed that out too, but he was funnier and also not a hypocrite