What Gervais does is hold a mirror up to the Hollywood elite, but for once, they don’t enjoy looking into it. 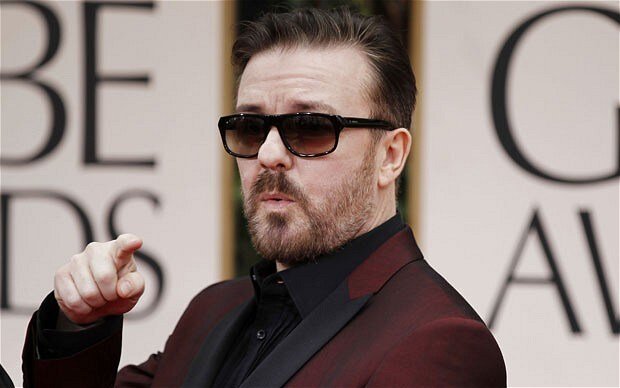 The 77th Annual Golden Globes came and went again last night: snooze fest. Full disclosure the only reason I watched was for host and funny man Ricky Gervais. If you’re a fan of stand up comedy you likely already know of Ricky Gervais’s legendary hosting of the Golden Globes. Last night marked the fifth time Gervais hosted the pretentious, I mean prestigious event.

Ricky’s style as a comedian is unmatched in terms of his relentless hammering of a joke. He’s crass and unashamed of it, and what do you have to be ashamed of when all of your jokes are rooted in undeniable truths. Watch the full opening monologue here.

What makes Ricky Gervais such a perfect addition to the hobnobbery is that he’s playing to the camera and ergo the folks at home. He’s cracking jokes for the people who got dragged into watching it because their date or friend has asked them to. He’s lining up tour dates for himself via the golden globes gig which is at least smart if nothing else. He is taking the urine, as they say in jolly old England and boy what better event in need of just that.

I didn’t want to miss a moment of Ricky so I was tuned in about a half an hour before because I had to find an illegal stream to watch it on. I was watching for some of the preshow madness or red carpet as they call it. Interviews with make-up caked faces and the kind of dresses that were made to trip over it were something else, I tell ya. It’s a convention of narcissists who just can’t help themselves on such a night. One nice example of that was Nicole Kidman doing laps around people getting interviewed before crashing them altogether.

The interview formula seems pretty standard, tell the celebrity how amazing they look and ask them what brand of clothing they’re in deep stuff. Exactly the type of conversation that would precursor a lecture about the state of politics and the world at large and there was certainly no shortage of that. Celebs accepted their awards with lots to say about climate change, vegan diet alternatives, diversity in Hollywood, abortion rights and so on.

I suppose that the oddest thing for me was just how bad these actors are at acting. Sure, they’re award winners and many have impressed me in roles before such as Joaquin Phoenix who went on to give a long incoherent speech about something. I’m not sure what but he’s unhappy, I know that much as were most stars last night. They seem to have the most trouble with acting as their authentic selves. You’d think that acting as a normal person would be easy for such trained professionals but their facial expressions and timing always seemed off. Give them a good script and a great director and they can transform into just about anybody but leave them up at the podium all by themselves and they forget everything they’ve ever learned in theatre school.

That is why a host like Ricky Gervais so imperative to keeping the boat from drifting out into dangerously self-aggrandizing waters. He trolls the reverence, skewers the hypocrisy and acts as a cultural translator between the Hollywood elite and the blue collars that keep the box-office running. He was the best thing to happen to the affair.

A joke that stands alone from his 2016 opening monologue went, “One Hollywood publication said that me hosting would mean that some film stars would stay away for fear of being made fun of. As if film stars would stay away from a chance to win a golden globe…particularly if their film company has already paid for it.” It gets the kind of involuntary reaction that is priceless, especially from Hollywood film company producer Harvey Weinstein, who enjoyed the joke in a way that was proof positive that it wasn’t hardly a joke at all.

For his fifth, and possibly final performance as the host of the Globes he seemed to be tamer than his previous performance in 2016 which I would argue was his best. He also chose to go less after individual celebrities and more so after the companies and corporations that dictate Hollywood’s fad-like mandates. When he did take a swing at them though, he threw his whole body behind it. “Apple roared into the TV game with The Morning Show, a superb drama about the importance of dignity and doing the right thing, made by a company that runs sweatshops in China.” That got a lukewarm response before Gervais turned the sentiment onto the crowd, “Well you say you’re woke but the companies you work for, I mean, unbelievable. Apple, Amazon, Disney…I mean if ISIS started a streaming service, you’d call your agent, wouldn’t you? So if you do win an award tonight don’t use it as a platform to make a political speech. You’re in no position to lecture the public about anything. You know nothing about the real world. Most of you spent less time in school than Greta Thunberg so if you win, right, come up accept your little award, thank your agent and your god and f*ck off.”

Took the words out of my mouth, thanks Ricky. Of course, many media outlets scolded Ricky for his lack of concern for the various social issues of the world. The Los Angeles Times headline read, “Politics reigned at the Golden Globes. Too Bad Ricky Gervais didn’t notice.” The Washington Post headline declared, “At the Golden Globes, Gervais’s sharpest barb poked Hollywood’s piety. Nobody cared.” I dare say Ricky is the only one who did seem to care, at least when it came to speaking on issues earnestly. One joke was, “Our next presenter was in starred in Netflix’s Bird Box, a movie where people survive by acting like they don’t see a thing—sort of like working for Harvey Weinstein.” That was met with boos and groans to which Gervais wasted no time retorting with, “You did it! I didn’t you did it!”

Another great example of Gervais putting the master in master of ceremonies is his ability to predict the predictable, dogmatic Hollywood psyche and false sense of ethics. A joke regarding Epstein was a testament to the comic’s timing. While referring to his own show Afterlife Ricky goes on to say, ” So, in the end, he didn’t kill himself, just like Jefferey Epstein,” upon groans to that Gervais tells the audience, “Shut up, I know he’s your friend but I don’t care.”

What Gervais does is hold a mirror up to the Hollywood elite, but for once, they don’t enjoy looking into it. If in the end, this is Gervais’s last time hosting, it will likely be my last time watching as well.