"I found out they were Proud Boys when I saw the headlines." 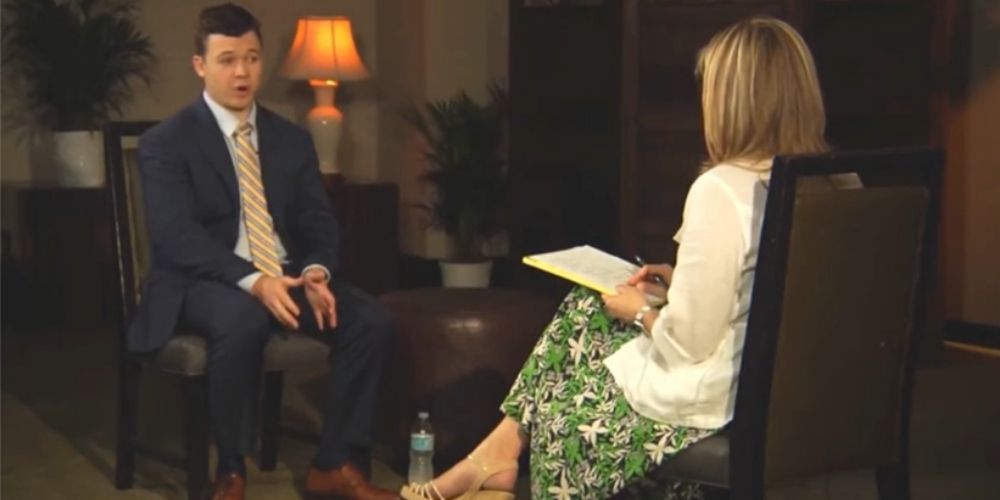 Kyle Rittenhouse claimed in a new interview Tuesday that his former attorney Lin Wood set up the notorious photo-op with the far-right Proud Boys and that the teen was not aware who they were nor that the gesture he was making with his hand symbolized white supremacy.

The photograph, which was used by the prosecution, the media and politicians to paint the then 17-year-old as a white supremacist was taken at a Pudgy’s Pub in Mount Pleasant, Wisconsin on January 5. Rittenhouse insists he didn’t know the meaning of the 'OK' hand gesture, which he made as he stood next to individuals he thought were construction workers who were revealed to be members of the Proud Boys.

"I found out they were Proud Boys when I saw the headlines."

A jury acquitted Rittenhouse last Friday on charges of homicide, attempted homicide and reckless endangering in the deaths of Joseph Rosenbaum, and Anthony Huber and the wounding of Gaige Grosskreutz.

The teen it was Wood who set up the photo-op during an interview with Ashleigh Banfield of NewsNation and said the picture was "…set up by my former attorney who was fired because of that, for putting me in situations like that with people I don’t agree with."

He added that that his other former attorney, John Pierce "arranged" the group of Proud Boys. He noted that Pierce wasn’t there for the meeting.

Rittenhouse also claimed that his former attorneys wanted the Proud Boys provide security, but that the teen said no because he didn’t "...want anything to do with them."

He added that Wood was QAnon theorist and "insane" and those were among the reasons the lawyer was fired.

"And he just says all these weird things like, 'We're going to keep that boy in jail, because there's not going to be any civil or criminal cases come the election,' which is just complete insanity."

During an interview on Fox News Monday with Tucker Carlson, Rittenhouse slammed his former attorneys for raising money for themselves while letting him stay in jail for 87 days.

Rittenhouse's current lawyers are in a legal dispute with Wood and Pierce over the teen’s $2 million bail funds, money that was raised on his behalf after he was jailed for the shootings.

"Lin Wood was raising money on my behalf, and he held me in jail for 87 days, disrespecting my wishes, put me on media interviews which I should never have done."

"They said I was safer in jail instead of at home with my family."

Rittenhouse also said the pair falsely labeled him as part of an "unorganized militia."

"John Pierce said that and it's blatantly false. I didn't know militia was until after the fact, until November 25, when I was watching some of the interviews he did. I'm like, I'm not in a militia. I don't know what that is."

Following the Carlson interview, White House press secretary Jen Psaki was asked if President Joe Biden would apologize to Rittenhouse for suggesting he was a white supremacist.

Psaki deflected and said "President Trump ... didn't just refuse to condemn militia groups on the debate stage he actively encouraged them throughout his presidency. So what we've seen are the tragic consequences of that - when people think it's okay to take the law into their own hands instead of allowing law enforcement to do its job."

Psaki also suggested that Rittenhouse was affiliated with the Proud Boys, which the teen has refuted. "The President spoke to the verdict last week. He has obviously condemned the hatred and division and violence from groups like the Proud Boys, and obviously that individual has posed in photos with, but beyond that I'll leave it to his comments around the verdict."

Rittenhouse told Carlson he is considering legal action against the president.

On September 30, 2020, Biden as the Democrat party candidate for President, tweeted a video montage of far-right groups to attack Donald Trump which showed Rittenhouse, featured alongside neo-Nazis marching through Charlottesville and Proud Boys.

Biden stated, "There's no other way to put it: the President of the United States refused to disavow white supremacists on the debate stage last night."

In an interview with CNN's Anderson Cooper during the 2020 campaign, Biden said, "I don't know enough to know whether that 17-year-old kid, exactly what he did, but allegedly he's part of a militia coming out of the state of Illinois. Have you ever heard this president say one negative thing about white supremacists? Have you ever heard it? That's the reason I got back in this race because what happened in Charlottesville."

Rittenhouse said he had "really good lawyers" who were looking into defamation charges.

The teen added, "I'm not a racist person. I support the BLM movement."

"I support peacefully demonstrating ... I believe there needs to be change. I believe there's a lot of prosecutorial misconduct, not just in my case but in other cases. It's just amazing to see how much a prosecutor can take advantage of someone."

"Like, if they did this to me, imagine what they could have done to a person of color who doesn't maybe have the resources I do or it's not widely publicized like my case."