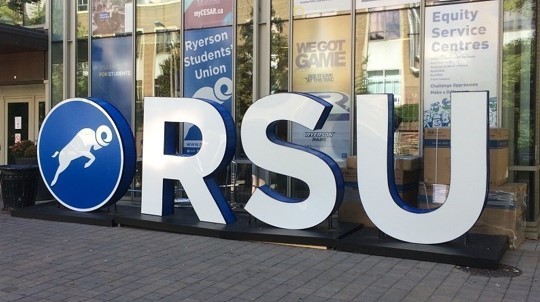 Ryerson University has terminated its 1986 Operating Agreement with the Ryerson Students’ Union (RSU), according to vice-provost of students Jen McMillen.

“Effective immediately, the university no longer recognizes the RSU as the official student government representing Ryerson students,” said McMillen in a statement posted to Ryerson Today on Friday. “The university has lost confidence in the RSU’s ability to represent students with good governance and to supply the services that students pay for.”

McMillen’s statement cited the improper use of RSU funds by members of the 2018-19 RSU executive that Ryerson learned about in January 2019 as a reason for cancelling the operating agreement. Former president Ram Ganesh was impeached pending an investigation into overspending on the student union’s credit card account. The credit card statement, which was addressed to Ganesh, included dubious large purchases at LCBO locations, a shisha lounge and restaurants.

The RSU filed a report with Toronto police about the credit card scandal on Tuesday, which could lead to criminal charges against Ganesh.

McMillen’s statement said that the credit card scandal meant the RSU breached its 1986 Operating Agreement with Ryerson. She said that Ryerson provided “ample time to rectify the situation, but the RSU has failed to do so.”

Her statement said Ryerson notified the RSU in January 2019 that they would be withholding fees they collect from students until the student union met the following conditions: conduct a forensic audit, share it with the university, and negotiate a new operating agreement.

Since February 2019, Ryerson has tried to negotiate a new agreement. The RSU has ceased responding to Ryerson’s efforts to reach common ground. Despite Ryerson’s best efforts to work with the RSU on a new operating agreement, the student union has failed to meet the conditions set out in January 2019.

A new student government may be formed, and Ryerson is encouraging students to begin giving this some consideration.

Ryerson is committed to ensuring that the services provided by the RSU such as health and dental benefits remain in place for students for the remainder of the academic year.

The RSU is a separate entity from Ryerson.

McMillen said that Ryerson is disappointed it had to terminate its operating agreement with the RSU.

“We want to reiterate that this decision was not made lightly,” she said. “The university wants to assure students that we remain committed to working in good faith with a student government that demonstrates a commitment to good governance and sound financial management.”

The RSU issued a statement shortly after condemning Ryerson for cancelling its operating agreement.

“The university’s attempted termination of the operational agreement, and added threat to support an entirely new student government, actively undermines the autonomy and democratic rights of students,” said the RSU’s statement. “The RSU does not accept this termination as valid under the agreement.”

The Canadian Federation of Students (CFS) said Ryerson’s interference with the RSU undermines the democratic rights of students and student organizations that represent them.

“Ultimately, all students’ unions are accountable to their members,” said the CFS. “University administrations cannot and should not insert themselves in the affairs of autonomous and democratically-governed students’ unions.”