Texan authorities became the first to use a robot to kill a suspect, when the Dallas Police Department in 2016 strapped an explosive device to the machine, remotely piloted it towards a gunman, and detonated it. 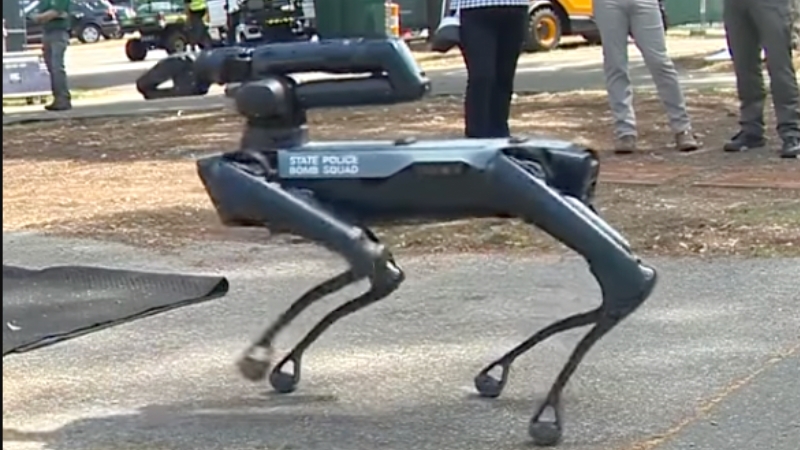 The SFPD's draft policy spelled out how the department plans to use its 17 remote-controlled robots, which are decked out with weapons and typically are used to defuse bombs, reported Fox News.

"The robots listed in this section shall not be utilized outside of training and simulations, criminal apprehensions, critical incidents, exigent circumstances, executing a warrant or during suspicious device assessment," the draft says. "Robots will only be used as a deadly force option when risk of loss of life to members of the public or officers is imminent and outweighs any other force option available to SFPD."

The SFPD Board of Supervisors Rules Committee has already approved of the proposed policy, and is currently petitioning city officials to legislate it, according to Mission Local.

Texan authorities became the first to use a robot to kill a suspect, when the Dallas Police Department in 2016 strapped an explosive device to the machine, remotely piloted it towards a gunman, and detonated it.

The robots can also be fitted with a device called a PAN, or Percussion Actuated NonElectric, disruptor. This device is a shotgun loaded with a "diverse selection of projectiles (i.e. liquid, solid, shot, frangible) to allow technicians to match projectiles to a given scenario," according to Evan A. Young of the United States Army Combat Capabilities Development Command Armaments Center.

The proposed policy is in response to the state of California passing AB 481, which requires law enforcement agencies to submit an annual report of their arsenals of "military-style" weapons, including robots.

An SPFD spokesperson told The Verge that they have always had the ability to employ deadly force when the risk of death of members of the public or officers outweighs the risk of not acting.

"SFPD does not have any sort of specific plan in place as the unusually dangerous or spontaneous operations where SFPD's need to deliver deadly force via robot would be a rare and exceptional circumstance," Officer Eve Laokwansathitaya said.

The proposition has sparked somewhat of an ethics debate online, with some arguing that this is necessary, while others pointing out darker implications.

"The robots are just tools used by an operator who pulls the trigger. It's no different than a gun," Ian Miles Cheong wrote on Twitter. "Unless you think police shouldn't be allowed to have guns or be forced to put themselves in harm's way because you have a problem with robots."

"There's a million scenarios in which being able to use a drone to immobilize or neutralize a suspect would be the only way to deal with them without inflicting mass collateral damage," he continued in the thread.

"But count on the anti-robotics Karens to ban their use."

Deb Fillman, an independent activist and commentator, took a different approach and highlighted some of the atrocities in the criminal justice and law enforcement system.

"What could possibly go wrong? It's not like the state has demanded we disregard reality, treat men as women, women as men (in prisons), stopped arresting shoplifters and ended cash bail even for violent criminals… Makes you wonder who these are for?," she wrote.