"fascism it's, it's, I mean, it's very, it's a complex idea—um—but generally fascism is—um—sorry, it's the supremacy of, like, the bourgeoisie—um—you know, being in power," said a protestor. 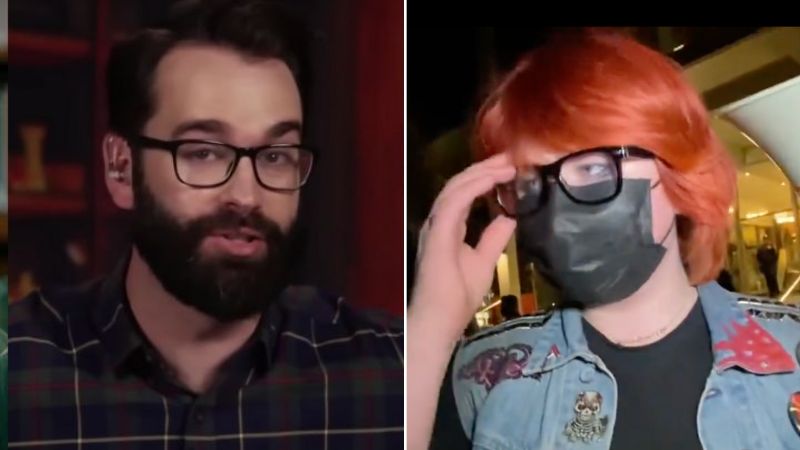 On Thursday, Daily Wire host, author, and filmmaker Matt Walsh spoke at the University of California, Berkeley as part of his What is a Woman tour and was met outside by chaotic, sometimes confused, far-left protestors shouting expletives and guttural cries.

Turning Point USA contributor Savanah Hernandez interviewed some of the protestors, including one radiation-red hair-colored activist who called Walsh a fascist and then said, "fascism it's, it's, I mean, it's very, it's a complex idea—um—but generally fascism is—um—sorry, it's the supremacy of, like, the bourgeoisie—um—you know, being in power, and generally, with Matt Walsh specifically—um—the way that, you know, he is, he's very—this—right now, his What is a Woman tour is very nuanced, um, but, I mean, its, he speaks on a lot of issues that he does not have—he's not based in science."


Italian leader during World War II, Benito Mussolini coined the term "fascism" in 1919 as a means to describe his political movement and was characterized by top-down, centralized, authoritarian governmental control combined with total unification around a leader.

The same emblazoned-haired woman also spoke with Hernandez about gender, saying, gender is the "societal construct" and sex is the "biological thing."

"And while sex may appear to be binary, as we know it, gender is legitimately just a societal construct, made up by humans," she added.

"So how many genders are there?" Hernandez asked.

It's a spectrum, she answered. "You can't define it. It's like saying, like, it can be whatever you want it to be."

At that point another protester intervened and told the woman to stop speaking with Hernandez, and she followed his orders. Hernandez noticed and asked, "Why are you shutting down her voice?"

But then the crows turned on Hernandez and began shouting at her through loudspeakers.


The same group of protestors also shouted "f*ck the police" in repetition.


They also dangled a donut on a fishing pole in an effort to mock and taunt law enforcement. The syrupy scarlet hair-colored woman shouted, "I know you want it."


Other attendees said Walsh was a "piece of a sh*t" and they called him "transphobic and homophobic."