Seattle Public Schools has contracted with Mike Mathias of a new organization called Anything Helps, which will be focusing solely on the encampment at Broadview Thompson. 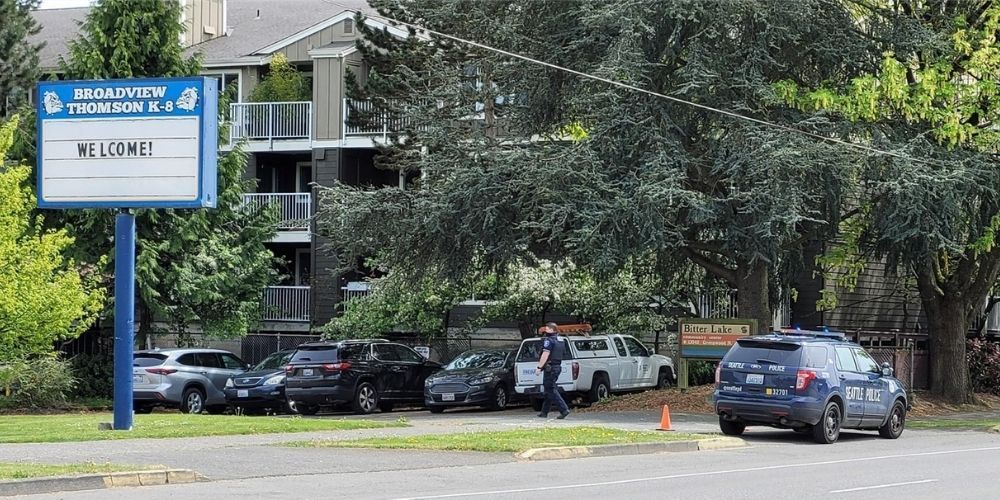 Seattle Public Schools hosted a meeting to address a dangerous homeless encampment on a public school property, pinning their hopes on one-man organization with an extensive criminal record to solve the problem.

After a year of drug overdoses, violence, lockdowns and worse at Broadview-Thompson K-8, parents and neighbors attended the meeting Thursday night to finally hear a plan about how school officials plan to clear the encampment. Students are set to return to school in September and approximately 60 itinerant individuals are still camping on the grounds.

Seattle Public Schools has contracted with Mike Mathias of a new organization called Anything Helps, which will be focusing solely on the encampment at Broadview Thompson.

Mathias told The Ari Hoffman Show on Talk Radio 570 KVI, that he will not be receiving any money for his efforts and that he turned down funding. However, that claim ran contrary to Seattle Public Schools, which told parents and neighbors that the district is giving $5,000 for Mathias to begin his work. Donations have also been coming into the fledgling organization and SPS officials said more money may be allocated.

"If it comes to it, the district has identified some dollars that can go toward supporting this effort a little bit more," said Liza Rankin, the school board director whose district includes Broadview Thomson.

Until now, many city officials and school board members have declined to meet with the group of neighbors, parents and employees who are seeking to address the encampments. In emails sent by neighbors and employees to The Post Millennial, Hampson and Director Zachary DeWolf demanded Mayor Jenny Durkan not allow the encampments to be removed from school grounds.

Mathias told Hoffman that he is assessing the needs of the campers and trying to connect them with individualized help and housing. His only claim of experience or qualifications of the job was being previously homeless himself.

Police records revealed that Mathias, who has been tasked with dealing with the encampment, has an extensive criminal past as well as addiction and mental health challenges.

In 2017, Mathias attacked a couple in a vehicle in a road rage incident. After berating the couple, and attacking their vehicle in the parking lot of a Target, they drove away to escape, at which point Mathias followed them and at another intersection exited his vehicle and damaged the couple's car.

Since then his driving record has not improved and he has dozens of unpaid citations.

In 2018 Mathias was caught shoplifting from Target. At the time he admitted to the crimes and having stolen from the location before. Retail theft is a regular crime committed by those in Seattle with mental health issues and those funding a drug habit.

Complicating removal of the encampment is also local Marxist activists that have been enabling the campers by giving them supplies and chasing off volunteer groups. Neighbors told The Post Millennial that Antifa activists have been spotted harassing outreach volunteers and have told the campers that the volunteer outreach groups, made up mostly of middle- aged residents, are dangerous.

Antifa has frequently used encampments as staging grounds for riots and as an opportunity to start confrontations with police over removals. Activists working the encampment, claim to be an aid organization called Mutual Aid, but work with Antifa and advocated for defunding the police, closing jails and decriminalization of various crimes.

Neighbors have video recorded drug dealers delivering directly to the encampment, fueling the problem. They have also photographed city vehicles bringing drug paraphernalia to the encampment. Bill Steele told KOMO News, "There's been a lot of drug use, drug dealing, I've seen more police, more fire trucks and more ambulances on my street this year than i have in all the previous 34 years."

Mathias told Hoffman that he secured agreements from two nearby shelters who have promised to make room for people if the encampment is not removed by the first week of September. This prompted the question as to why the delay in providing shelters for people camping in a field to which, no concrete response was given.

During the meeting, the district stated that they had plans to secure the property to prevent future encampments. Parents and neighbors asked if that means more fencing or overnight security, but district officials did not have details.

Attendees were quick to point out the numerous lockdowns in the school, violence in the encampment and overdose deaths, especially in light of the district having banished police guards from campuses in 2020. Due to the encampment, the district was forced to hire security guards.

Neighbors also told The Post Millennial that activists are trying to 911 calls, due to the media spotlight that has been shone on the situation. Flyers have even been posted discouraging campers from calling 911 even for medical issues.

Mathias claimed that in the time he has been working, three people have already left the encampment and six more said they are ready to go as soon as shelter space is open.

Neighbors are skeptical and have called him a "grifter," equating him to just a new face in the corrupt Seattle "homeless industrial complex."