The SNC-Lavalin scandal devolved into heated clamouring at the Justice Committee Wednesday as opposition members jeered Liberal MPs exiting the backdoor, after using their majority to shut down an emergency meeting to discuss former Attorney General Jody Wilson-Raybould’s return. 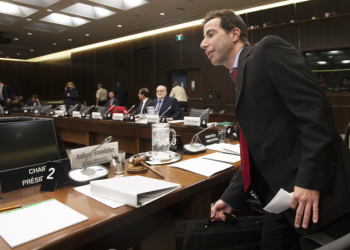 The SNC-Lavalin scandal devolved into heated clamouring at the Justice Committee Wednesday as opposition members jeered Liberal MPs exiting the backdoor, after using their majority to shut down an emergency meeting to discuss former Attorney General Jody Wilson-Raybould’s return.

“What are you guys afraid of?” shouted Conservative MP and committee member Michael Barrett, who referenced Justin Trudeau’s recent 4200km roundtrip between the capital and Florida where he is currently vacationing. “Is that why the prime minister came back to Ottawa, to give you guys your orders for the day?”

The emergency meeting was triggered after four members wrote to committee chair Anthony Housefather last week. The reason: former principal secretary to the PM Gerald Butts’ March 6 testimony differed markedly from Wilson-Raybould’s version of events and she deserved a second chance and the opportunity for full disclosure. Wilson-Raybould also desired this second chance and said so publicly in a statement.

Conservative MP Pierre Poilievre told the committee at the emergency meeting’s outset that Trudeau had “granted a limited waiver (for Wilson-Raybould’s testimony) applying only to the time she was attorney general.”

“But after he removed her … she witnessed events that were so egregious she considered it warranted her resignation from cabinet altogether,” said Poilievre. “Canadians deserve to know what those events were … so far the prime minister has kept in place a partial gag order preventing them from finding out.”

Wilson-Raybould was shuffled out of the Justice portfolio into Veterans Affairs on January 14th, and was replaced by Québec MP, David Lametti. On February 12th, Wilson-Raybould resigned from cabinet and six days later Butts resigned because his presence was causing “a distraction.”

Butts’ testimony to the Justice Committee on March 6th was followed the same day by Clerk of the Privy Council Michael Wernick; his second appearance to speak on his involvement in the affair.

In addition to decrying the mean social media comments directed at him since he first appeared on February 21st, the country’s top bureaucrat stuck to his story—that conversations with Wilson-Raybould were routine for cabinet and also warranted because of the SNC-Lavalin jobs that could be vulnerable during a protracted trial and conviction.

That two-part Justice Committee confab ended with the scheduling of an in-camera session on March 19 to discuss the possibility of additional witnesses, including Wilson-Raybould.

“Cover up,” is how Conservative MP Michael Cooper described it. “I’m voting against this cover up.”

The Québec construction firm and two of its subsidiaries stand accused of paying $48 million in bribes to Libyan officials to win contracts there between 2001 and 2011. If convicted, the company faces a 10-year ban on bidding for federal contracts.

While not connected to the Libyan case, SNC-Lavalin and more than 100 of its subsidiaries in 18 countries are currently barred until 2023 from bidding on World Bank funded projects after bribing officials in Bangledesh to garner a bridge contract there. Adding to the company’s resumé of shady dealings, last May a former SNC executive was charged with illegal campaign donations to political parties totalling some $118,000, of which more than $85,000 found its way into Liberal coffers.

On February 27, Wilson-Raybould testified to the committee that she rebuffed repeated overtures between September and December of last year to revisit the Libyan bribery case against SNC. She meticulously cited these interactions with PMO staffers, Wernick, Finance Minister Bill Morneau, Butts and even Trudeau and also testified that political considerations—last October’s provincial election in Québec and this year’s federal election— loomed in their discussions.

Butts has said he does not recall these political ramifications as has Wernick, while Butts and Trudeau have served up the ‘different people experience the same situation differently’ argument to explain the variance between theirs and Wilson-Raybould’s stories.

Little more than a week after Wilson-Raybould’s testimony, and following Butts’ appearance at the Justice committee, Trudeau faced the nation’s media on March 7 and claimed any discussions about SNC with the ex-attorney general were always about protecting 9,000 SNC-Lavalin jobs. During a recent television interview Lametti—Wilson-Raybould’s replacement as attorney general—he did not rule out a deferred prosecution agreement for SNC-Lavalin.

After the Globe story broke, Trudeau told media allegations therein were “false” before shifting his position that conversations he and others had with Wilson-Raybould about SNC’s legal fate constituted “vigorous debate.” Last week, Trudeau moved the goal posts again by pivoting to the “job saving” rationale.

After Wednesday’s emergency meeting Poilievre told media that “that a disgusting coverup by Liberal members has turned the Justice committee into the Justin committee”.

The scandal has also attracted international attention, most notably the Paris-based Organization for Economic Co-operation and Development which announced this week it would be monitoring the matter to ensure the Canadian adheres to obligations under the Anti-Bribery Convention; including that economic considerations not be considered a mitigating circumstance when weighing fraud and corruption charges or their prosecution.