Trump campaign lawyer Sidney Powell broke down suspicions and allegations of illegalities with regard to Smartmatic voting software, sourcing affidavit statements from a Smartmatic whistleblower. 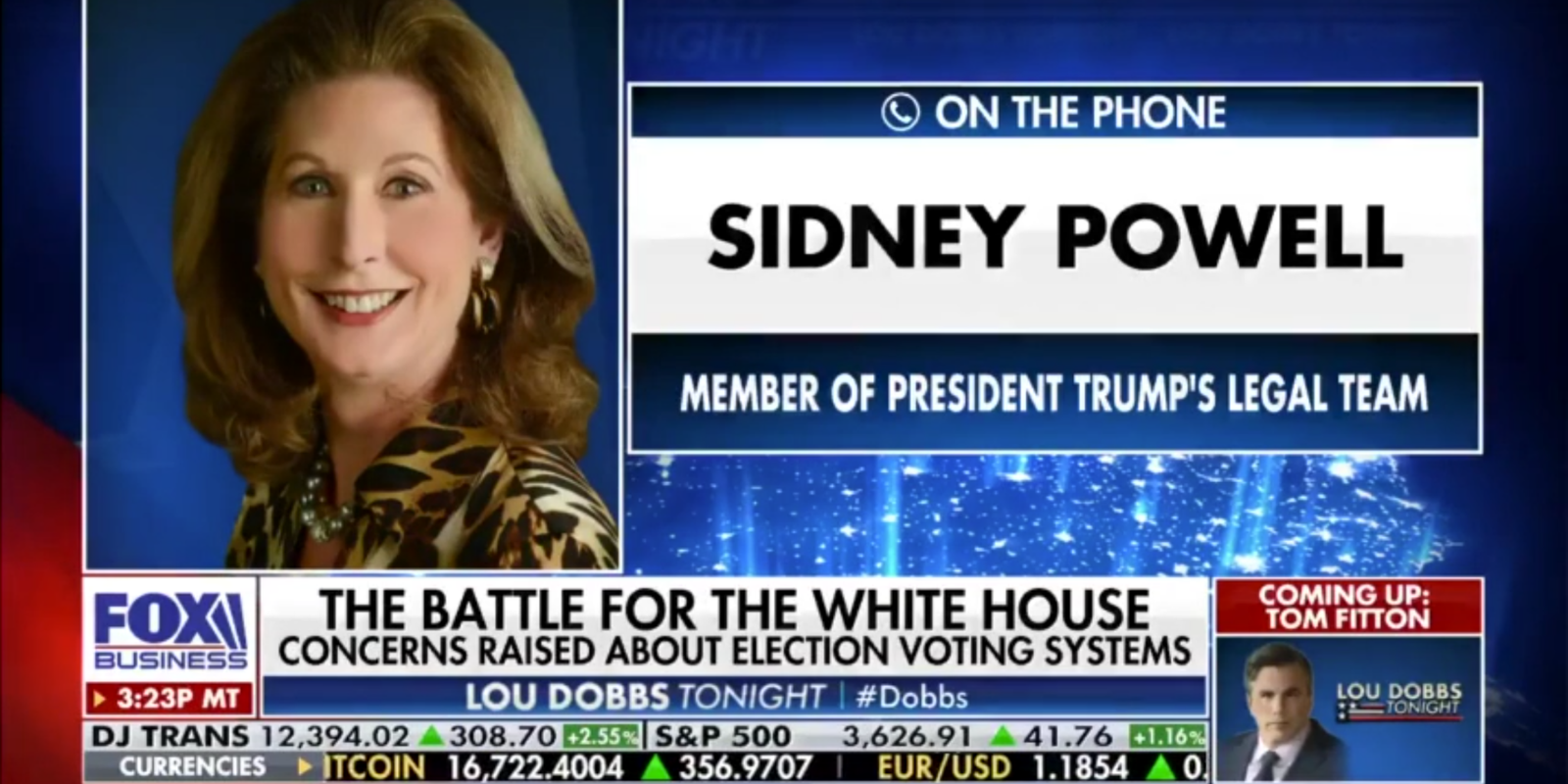 In an interview with Lou Dobbs on Fox Business, Sidney Powell, lawyer for the Trump campaign, broke down suspicions and allegations of illegalities with regard to Smartmatic voting software, sourcing affidavit statements from a Smartmatic whistleblower.

"Documents show that Dominion Voting Systems submitted a bid to the city of Philadelphia in 2018 to be considered as their contractor for voting machines," Dobbs prefaced the segment.

"Those same documents reveal very little about the company's foreign connections. When asked by the city to list any foreign ownership or investors in either the parent company and/or its subsidiaries, Dominion had something to say but nothing to show."

Then Dobbs displayed an entirely redacted section on the paperwork in question; Dominion was ultimately denied the contract. Dominion is based in Toronto, Ont.

Smartmatic has stated that they have no ties to Dominion whatsoever.

Foreign interference in US elections outlawed

Just three months before Dominion's bid, President Donald Trump signed an executive order against foreign interference in America's elections. The commander-in-chief wrote: "The assessment shall identify, to the maximum extent ascertainable, the nature of any foreign interference and any methods employed to execute it, the persons involved, and the foreign government or governments that authorized, directed, sponsored, or supported it. The Director of National Intelligence shall deliver this assessment and appropriate supporting information to the President..."

"The question is: what the president ever informed of this attempted bid by a company with foreign ties?" Dobbs asked. "And why are they being so secretive?"

Then Powell, a member of Trump's legal team and General Michael Flynn's attorney, joined the conversation via phone call.

Powell cited "stunning evidence" from a first-hand witness, a high-ranking military officer who was present when when Smartmatic was designed. She went on to read the statements from the affidavit.

"Designed in a way that the system could change the vote of each voter without being detected," she quoted, "he wanted the software itself to function in such a manner that if the voter were to place their thumbprint or fingerprint on a scanner, then the thumbprint would be tied to a record of the voter's name and identity as having voted—that the voter would not be tracked to the changed vote.

Powell emphasized that "he made it clear that the system would have to be set up but not leave any evidence of the changed voter for a specific voter" and that "there would be no evidence to show and nothing to contradict."

"Smartmatic agreed to create such a system and produce the software and hardware that accomplish the result for President [Hugo] Chávez," Powell continued.

After the Smartmatic electoral management system was put in place, the whistleblower closely observed several elections where the results were "manipulated using the Smartmatic software."

Instances included the Venezuelan presidential election in December 2006, when the incumbent Chávez was running against challenger Manuel Rosales and won by a landslide. Then in 2013, he witnessed another national election when the Smartmatic system was used to "manipulate and change the results for Chávez."

"It goes on and on. He was in the control room where multiple digital display screens were shown for results," Powell described, illustrating how the actual voting results were fed into that room and onto those displays over an Internet feed which was connected to a sophisticated computer system created by Smartmatic. Those present were able to see whether the votes from any specific area or the national total were "in their favour or against them."

The individual controlling the vote tabulation computer had the ability to change the reporting of votes by "moving votes from one candidate to another by using the Smartmatic software."

Powell explicated how President Nicolás Maduro and his supporters realized the size of his opponent's lead and "worried they were in crisis mode" and effectively "would lose the election."

The Smartmatic voting machines used in each state reported voting information to the graphics control center in real-time so the "decision was made to reset the entire system."

"Maduro and his supporters ordered the network controllers to take the Internet itself offline and practically all parts of Venezuela to change the results," Powell recounted.

It took the voting operators approximately two hours to make the adjustments in the vote from candidate Henrique Radonski to Maduro, Powell detailed. "Then when they turned the Internet back on and the online reporting was up and running again, they checked each screen state-by-state to be certain they can see each vote was changed in favour of Maduro."

Smartmatic in the US

Dobbs then pointed to Smartmatic board of directors chairman Peter Neffenger, a retired vice admiral of the US Coast Guard. Powell later noted that Neffenger is on the "very presumptuous and immediately failing" Biden-Harris transition team.

Dobbs inquired about Powell's earlier tweet lambasting the Central Intelligence Agency and what she discovered about the foreign-owned company's "association."

"Other than the fact there's no way all this was happening around the world without the CIA knowing about it, that's just logic," Powell fired, placing the fault on "Venezuelan, Cuba, and essentially Communist money."

Past concerns with Smartmatic

Powell charged that "people have been reporting this to our government for several years, including Democrats, and no one's done a damn thing about it. I can't even express how furious I am over this."

"I share your fury and frustration," Dobbs answered. Then he broke the news that the Federal Bureau of Investigation has launched a probe looking into the 2020 presidential election. "Now what that means beyond that, but at least it's confirmation that they are investigating and we'll see what moves, because there had been no indication that indeed publicly that they were involved. They are now."

Allegations of Smartmatic fraud in US elections

Continuing, Dobbs presented the "authorities" of these state-run elections. The full screen delineated that "an election crime is generally a federal crime if an election or polling place official abuses their office," among other charges.

"This person saw through his own experience exactly what was happening there—was happening here," Powell summarized. "It is a deeply, deeply troubling election," Dobbs added, "the worst in this country's history bar none."

Dobbs and Powell call on the DOJ for action

Dobbs criticized the Justice Department's "slow to move" inaction. "They have adopted a position of willful blindness," Powell interjected, "to this massive corruption across the country. And the Smartmatic software is in the DNA of every vote tabulating company software and system."

"Yes, it is more than just a willful blindness. This is people trying to blind us to what is going on. We don't even know who the hell really owns these companies, at least most of them," Dobbs concluded. "That's gotta change and we've gotta find out exactly what's going on. And thank God we've got a president who will stay in the fight all the way through until we get those answers."