The mandates set forth by Governor Inslee are among the strictest in the country, providing no option for employees to get periodically tested in place of the vaccination. 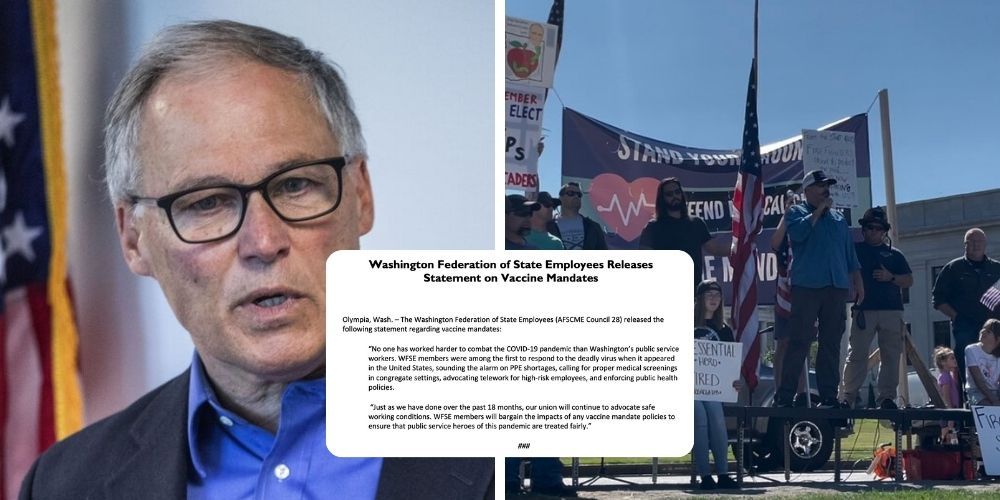 The Washington Federation of State Employees (WFSE) filed a lawsuit on Thursday against Governor Inslee in an attempt to stop the COVID-19 vaccine mandate from going into effect. This until the state and union reach a bargaining agreement.

According to a press release from WSFE, the complaint claims that the state "failed to bargain the effects (of the mandate) in good faith" with the union. The lawsuit was filed on Thursday in Thurston County Superior Court.

On August 9, Democratic Governor Jay Inslee announced mandatory COVID-19 vaccinations for state employees and workers in private health and long-term care settings, including state for contractors. Further mandates were announced on August 18, requiring vaccinations for those working in K-12, childcare, and higher education. All employees affected by the mandate are required to receive both doses of the coronavirus vaccination by October 18, meaning they will need to receive the first dose by September 6.

For example, if an employee has taken a prescribed medicine from a doctor, like an antacid, they would be disqualified from receiving a medical exemption.

The lawsuit alleges that if the state vaccine mandate proceeds without reaching an agreement with the union, "the legal rights of employees represented by the WFSE will be irreparably harmed and impaired, and they will be denied any meaningful and effective remedy."

The union argues that during bargaining sessions with the state, representatives did not offer counter-proposals and struck down all of the union's proposals to "modify or mitigate the impacts of the proclamation."

Thousands of protesters took to the Washington State Capitol on Saturday to advocate for medical freedom. The majority of the crowd included firefighters, health care workers, law enforcement officers, and teachers, all of whom are forced to get vaccinated. The common theme throughout the protest was that it should be an individual's right to choose what goes into their bodies, not the governments.

Those protesting made it clear that they "will not comply" with the mandate and warned about the detrimental effects that will come when thousands of first responders and front line employees aren't there to help the community come October 18.