At 6 am Saturday morning, a student senator at Washington University in St. Louis, Missouri, was caught removing American flags from a campus memorial display remembering the lives lost during the terrorist attacks on Sept. 11, 2001. 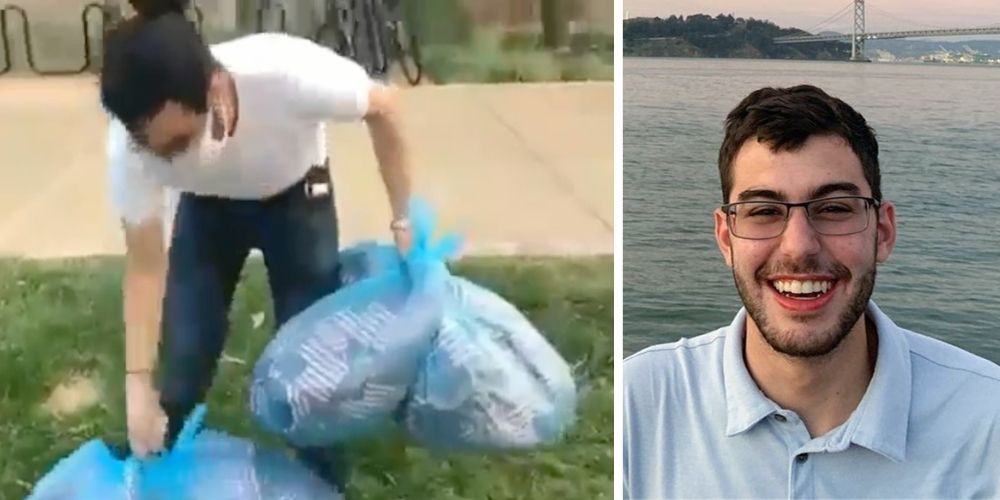 At 6 am Saturday morning, a student senator at Washington University in St. Louis, Missouri, was caught removing American flags from a campus memorial display remembering the lives lost during the terrorist attacks on Sept. 11, 2001.

The student government member, identified as vice president of finance for the student union Fadel Alkilani, was caught red-handed removing numerous 9/11 flags that were placed on Mudd Field and tossing them in trash bags.

The thousands of commemorative flags were part of the Young America's Foundation's memorial 9/11: Never Forget Project for the lives lost at the World Trade Center, the Pentagon, and on United Flight 93. 2,977 flags were planted in the ground, one for each innocent life murdered by the radical Islamic terrorists.

Nathaniel Hope, a member of the WU College Republicans, originally filmed the incident as the agitated Alkilani carried multiple trash bags stuffed with American flags he had plucked while he continued to steal more.

The conservative student said that Alkilani showed "no remorse." Hope noted that the removal of the 9/11 flags were "in violation of school rules." The young College Republican added in a statement to YAF that Alkilani was "also saying profanity."

According to YAF's press release, the national organization reached out to Alkilani, who replied, "I did not violate any university or legal policy. Now go away."

Like many other far-left indoctrinated students serving in university leadership roles who express militant anti-America views, Alkilani as the chairman of the student senate finance committee is charged with doling out funds to student organizations, YAF reported. Alkilani's family made a home in the United States after leaving Palestinian territory.

According to Fox News, Alkilani wrote on Twitter that his intentions were to "protest against American imperialism and the 900,000 lives lost as a result of post 9/11 war." In an Instagram story, Alkilani wrote that "there is a massive harassment campaign propagated primarily by Washington University College Republicans, as well as the national Young American's Foundation regarding an incident that occurred at approximately 6 am on Saturday September 11, 2021."

"There is a large amount of misinformation circulating, and I seek to explain both what occurred and why it happened," the story continued.

Alkilani's lengthy Instagram statement goes on to claim that he's a victim and attempts to justify the vandalism as an act to fight "Islamophobia" and criticize the American military interventions that followed the 9/11 attacks. "Any memorial of 9/11 that does not contend with these facts is not only incomplete, but it also amplifies pro-imperialist sentiment and actively disrespects those who have died because of American Invasion," Alkilani penned.

"Muslims such as I have faced fear, harassment, and Islamophobia from these who unjustly use the victims of 9/11 as a political cudgel," Alkilani stated. "Those who died during 9/11 deserve better than to be used as a political tool by those who seek to excuse American imperialism and Islamophobia," wrote Alkilani.

According to a student newspaper at the university, Alkilani defended his actions, and told what his alleged plan was for the flags: "My planned protest was to place the bags of flags on Mudd Field, along with various statistics explaining the human cost of 9/11 in the past 20 years," Alkilani wrote. "On the sides of the bags, some writing may be visible, but the full statement was not outlined at the time of the video. I did not deface, destroy, damage, nor steal any flags, nor did I interfere with any registered event time. I assert that I did not violate any University Code of Conduct policy, though the conduct process is undergoing."

Alkilani further alleged Saturday on the now-deleted Instagram page that he was not stealing the flags, even calling the event the "flag relocation incident."

YAF reported that despite Alkilani's claims that he was not disposing the flags, the student senator's protest plan never came to fruition. The purported agenda proved untrue Sunday when Hope filmed multiple flags that were discarded inside a trash can nearby the site of the Sept. 11 confrontation with Alkilani.

According to YAF, students participating in the project at WU said that Alkinali attempted to vandalize the display on Friday night, but was told to stop after campus police were called. After being caught Saturday morning, campus police were notified once more. Campus authorities warned Alkilani that he would be arrested if he disrupted the display again, YAF reported.

Washington University responded to YAF's request for comment, stating that officials are "disappointed" to learn about the memorial's "disruption" and "condemn the interference with the expression of support by the College Republicans for the victims of the national tragedy..."

In the identical statement that Vice Chancellor for Marketing and Communications Julie Flory emailed to Student Life, the student newspaper noted that administrators did not mention Alkilani by name.

"The actions surrounding this incident were not on behalf of the university or a university-sponsored organization. We value freedom of expression in all forms and will work to ensure that all students are able to express their points of view through appropriate channels without disrupting the rights of others to show support for causes they care about. This is a critical component of our core values and we are committed to facilitating free speech on our campus," WU said.

In the student newspaper's article, College Republicans president Nick Rodriguez called for disciplinary measures to be enforced against Alkilani.

"At minimum, I believe he should be removed from both SU and his [resident advisor] position, as what does it say to be a top American institution, and have yourself represented by a student leader who has no respect for property, campus traditions or the remembrance of thousands of lost lives," Rodriguez wrote. "Today is about remembering the tragedy, 20 years ago to the day, not to make a political statement. Any reason he can conjure to remove the flags I find ludicrous."

The chair of the conservative group on campus told YAF that the incident shows the school has become "infected" with toxic campus culture. "To see a non-partisan, non-political memorial, disgraced without a swift response from the university says volumes," Rodriguez said, a junior at the university.

WU did not address whether the student would face any disciplinary action.

The university's Chancellor Andrew D. Martin has since responded in an official statement Sunday evening: "I want to make it very clear that, as an institution, we find the actions of this student to be reprehensible."

"The removal of the flags impeded the ability of individuals to commemorate the lives lost on 9/11 and to process the trauma of that day," Martin wrote. "This act was seen as a personal affront by many, at WashU and beyond, and as an affront to the ideals of our institution. The 9/11 commemoration on Mudd Field was not just a memorial, it was also an act of speech. The free exchange of ideas is central to a vibrant university. It is a hallmark of our academic community, and it is imperative that everyone here is able to express their views in a respectful environment. Students have the right to express their viewpoints, but they also have the obligation to respect others' expressions."

Martin said that WU is "taking appropriate steps" to investigate the incident and will follow the university's standard protocols. "Such steps often take time. As we move forward, we will also ensure that the student involved has access to campus resources that are regularly available to students as he navigates the consequences of his actions, both on campus and beyond," Martin added.

"As a university that considers freedom of expression to be a cornerstone of our institution, it's important for all of us to recognize that, even when we disagree, we are one community. We must find ways to have difficult conversations and listen to one another while acknowledging that among us there will be differing intellectual outlooks and emotional experiences. Moments like this are certainly challenging, but if we take the opportunity to try to understand different perspectives, we will ultimately become stronger for the experience. Free speech has empowered – and challenged – college campuses across the country for generations. There are many lessons to be learned from our shared history, and my hope is that this distressing incident will be another such opportunity for our community. Ultimately, we must put respect and dignity above all else, as these are the values that will carry us forward," Martin concluded.

YAF has received four reports of vandalism at 9/11 displays across the country just in 24 hours, YAF spokeswoman Kara Zupkus told The Post Millennial.

"It's apparent that as years past and schools attempt to sanitize the horrors of 9/11, students do not grasp the realities of radical Islamic terrorism—and instead see 9/11 as a day to denounce American exceptionalism," Zupkus said in the exclusive statement. "We will continue to educate students about the truth of that tragic day, and encourage our activists to stand up to the ignorant, lawless Left."

YAF also reported that a 9/11 memorial was vandalized at Michigan State University on late Friday night, just hours before remembrance ceremonies were scheduled to take place across America. "Never" was removed from "Never Forget" on the 9/11 display. The word "Israel" was spray painted across the American flag.