Sam Guan, one of the passengers on the flight, uploaded a video on Twitter showing passengers trying to cool themselves using paper as fans, with one man pleading for staff to open the emergency exit, saying “kids are fainting.” 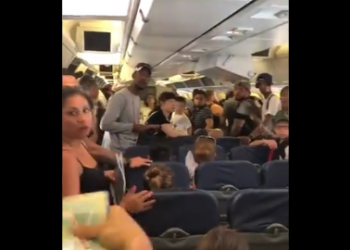 Passengers on a Sunwing Airlines flight to Toronto were stuck in their plane in Cancun on Friday. According to Global News, The plane had no air-conditioning on amid sweltering temperatures.

Sam Guan, one of the passengers on the flight, uploaded a video on Twitter showing passengers trying to cool themselves using paper as fans, with one man pleading for staff to open the emergency exit, saying “kids are fainting.”

Sunwing released a statement, confirming the incident. “We can confirm that flight WG272, operated by Eastern Airlines, was delayed on departure from Cancun today due to a maintenance issue that also affected the air conditioning on board.” The airline said the flight was operated by Eastern Airlines due to the grounding of the Boeing 737 MAX jets.

Sunwing says passengers deboarded the plane while a technician tried to fix the issue with the plane on the tarmac for about an hour with no success. However, they did not address Twitter reports claiming that children fainted in the heat.

Twitter user Brianna Bendici says that the flight was delayed by three and a half hours after boarding, and was deboarded twice “with no communication to passengers.” She said the cause of deboardation was “rising temperatures.”

Some passengers, such as Twitter user Rik, took drastic measures to stay cool. “Had to strip my kids to their underwear in a desperate attempt to cool them after they were faint!” he said. He also claimed the temperature inside the aircraft hovered around the 40 degree Celsius mark.

Sunwing says that the plane was unserviceable on Friday, and will fly out of Cancun on Saturday morning. The airline says passengers were given accommodation for the night along with food and beverage vouchers redeemable at the airport.

Last week, a Sunwing flight on the same Cancun to Toronto route was delayed by over 13 hours because the flight crew exceeded the maximum hours they could work. On Friday, the Canadian federal government announced new regulations that require airlines to provide status updates every 30 minutes if flights are late or cancelled; this will take effect beginning July 15.