Stanton almost immediately kicked the student out of the chatroom, deleted the chat, and proceeded to attack the president while calling out the student for mentioning him. 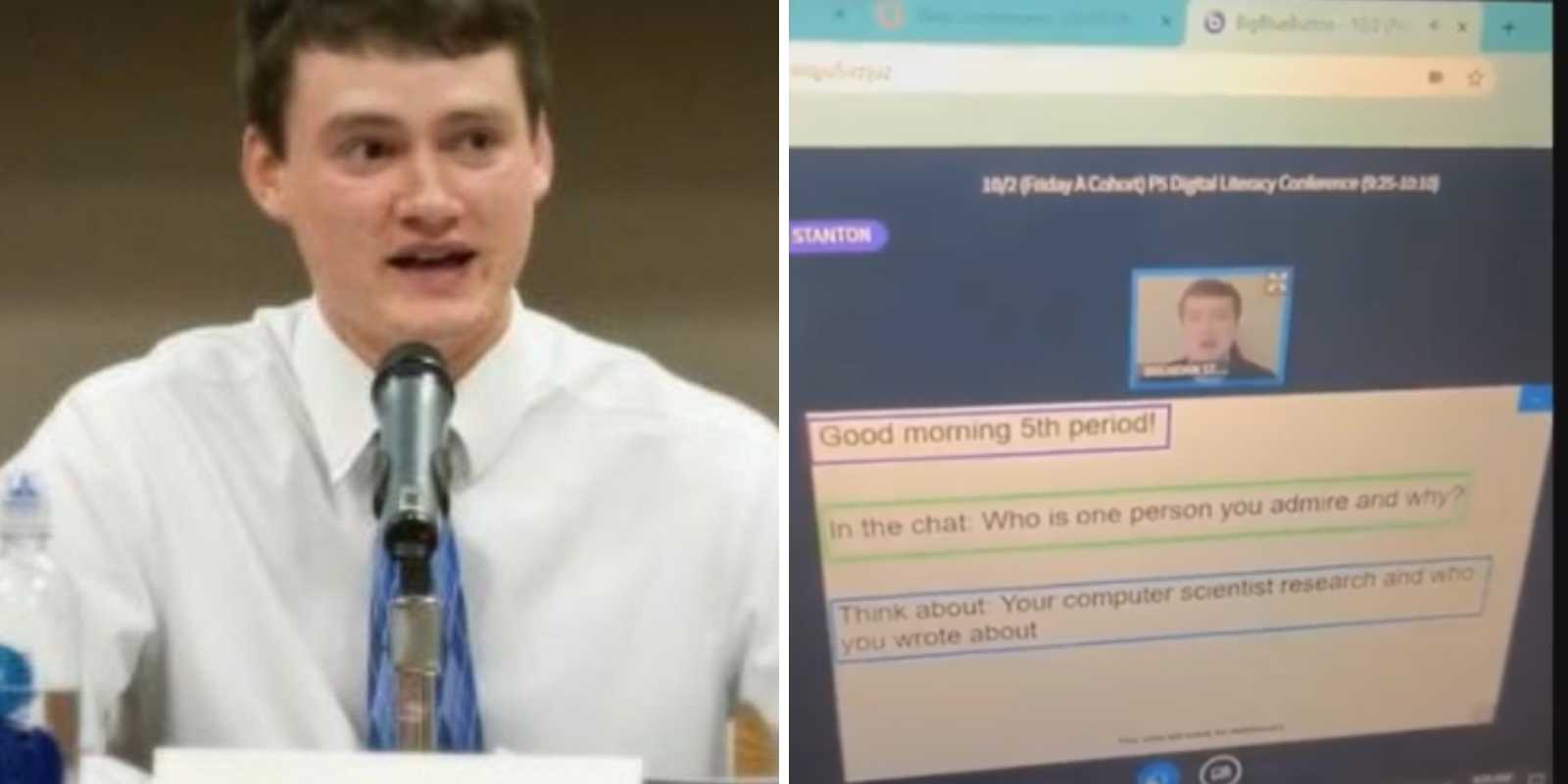 A Tacoma, Wash. teacher asked his sixth grade class to name someone who they "admire and why," and when a student typed in their answer as Donald J. Trump, the teacher deleted it, and explained that it was "inappropriate," and that Trump has "spoken hatred to many individuals."

The virtual learning encounter was caught by the student's mom, and shared by Jason Rantz and My Northwest.

The incident was ignited by Brendan Stanton—a middle school teacher at P.G. Keithley Middle School in Tacoma—asking his students who they admired and why. When one student said Trump, Stanton went off the deep end.

Stanton booted the child from the chat by saying that the student's answer was "inappropriate."

Elsy Kusander's 10-year-old logged into her child's remote learning class for another day of school on Friday October 2, where Stanton asked the students a daily question. Students were asked to write their response to the question in the online chatroom.

The screenshot Kusander took of her son's answer read: "I admire Donald J. Trump because he is making America great again. And because he is the best president the United States of America could ever, ever have. And he built the wall so terrorists couldn’t come into in the U.S. Trump is the best person in the world. And that’s why I had admire him."

My Northwest reported that Stanton almost immediately kicked the student out of the chatroom, deleted the chat, and proceeded to attack the president while calling out the student for mentioning him.

It was only when Kusander came into the room that she noticed what happened, and heard Stanton berating the president. She then began to record the incident.

"The example that was shared in the chat, which I went ahead and erased for us, was not appropriate right? Especially as that individual has created so much division and hatred between people and specifically spoken hatred to many different individuals, okay?" Stanton said.

"Again, that individual has spoken hate to many individuals and I don’t think is an appropriate example for a role model that we should be admiring," Stanton concluded.

Kusander was taken aback by the comments made by her child's teacher, saying: "I went into my son’s room and I heard the teacher saying that this individual is hateful and divisive, etc. I started to record," Kusander said. "How can a teacher be teaching to his students horrible things about the president of the country without facts?"

Kusander asked Stanton if he would be available to discuss the incident over a phone call, to which he obliged later in the afternoon. Stanton proceeded to tell Kusander that the only reason he deleted the response was because it was not related to the question of the day.

The teacher attempted to hide what really happened by saying that he had asked the students to pick a computer programmer they really admired, as opposed to a figure in general.

"Donald Trump would not fit that prompt… just because it was a little bit off topic," Stanton reportedly told Kusander.

Kusander finally broke it to Stanton that she had recorded the incident. "My perspective has nothing to do with Donald Trump himself, right? I try to keep politics out of the classroom," he explained.

"I do try to keep politics out of the classroom … because students have different opinions, right?" he said. "And so if the way that I said it was not perfect, I do apologize. What I was trying to say is just, ‘Hey, hey, guys, let’s get it back to our topic of the day because we really need to get moving into our content, which was on our computer scientists.'"

Stanton went on to describe how he was offended by Kusander's child saying "that the border wall keeps out terrorists," according to My Northwest.

“But we know that our neighbors at the southern border are not all terrorists, right?” he noted.

Kusander went on to say that she had emigrated from Honduras, to which Stanton noted: "So you would understand." Kusander explained how she was against illegal immigration, though Stanton was ready for Kusander to agree with them.

Kusander said: "I came into the room, and you were talking, I got my phone and I recorded part of your conversation,” she said, add that "I clearly saw and recorded what you were saying …"

Stanton replied: "I do apologize if my words were not perfect at the time," he told her. "If I used … if I said that Trump was ‘hateful and divisive,’ that may have been what I used at the time, but my purpose was in bringing us back to the conversation of computer scientists and the positive role that they’ve played in our history."

"I totally respect him [Kusander's son] as an individual. And his opinion. I am always interested in student feedback and also parent feedback as well. So I appreciate you having this conversation with me," Stanton said.