"​​The holiday season is a time for festive traditions, elaborate meals, and gathering with the people you love the most. But sometimes in the midst of holiday gatherings, tough topics can come up – especially in light of the recent Supreme Court decision which overturned Roe v Wade." 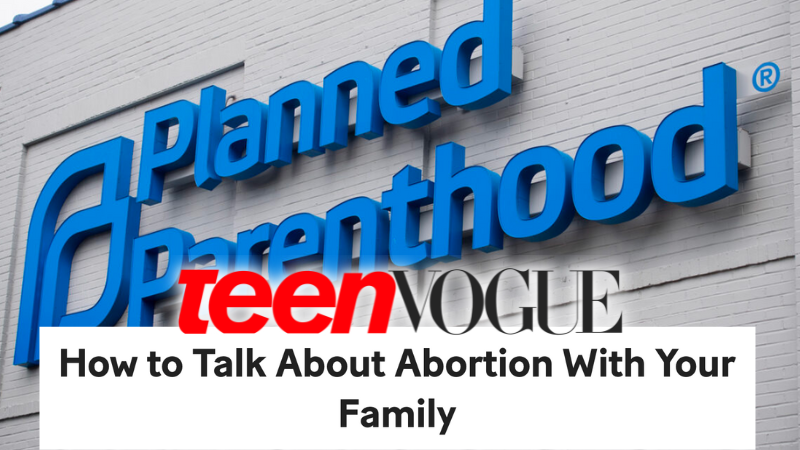 Olivia Rondeau
Dec 16, 2022 minute read
ADVERTISEMENT
ADVERTISEMENT
In an article marketed towards minors on how to talk about abortion, Teen Vogue promoted advice given by Planned Parenthood and other abortion industry profiteers on how to have pro-abortion conversations with pro-life family members this holiday season.

In the piece, titled "How to Talk About Abortion With Your Family," writer Fortesa Latifi shared tips like "remind your relatives that abortion is personal," and "keep yourself safe and decide whether it's worth the conversation."

The sister publication to Vogue magazine, Teen Vogue is catered to, naturally, teens. Despite the outlet being primarily consumed by minors, they shared tips from a Planned Parenthood Public Affairs Project Manager, Andrea Schmidt, and "abortion doula" Hannah Matthews. Typically, a doula aids in the pregnancy, labor, and delivery process, not the termination in it.

"​​The holiday season is a time for festive traditions, elaborate meals, and gathering with the people you love the most. But sometimes in the midst of holiday gatherings, tough topics can come up – especially in light of the recent Supreme Court decision which overturned Roe v Wade," Latifi wrote. "If you're heading to holiday gatherings where you plan to talk about abortion with those who may not support it, there are a few steps you can take to foster a productive discussion."

She then began to share tips and tricks from the abortion activists.

"Not going into it with hostility, being open-minded, and asking open-ended questions might lead to common ground and open and honest conversation," Schmidt said.

She characterized the conversation as necessary for achieving "long-term culture change" and "restoring our rights."

"One conversation might not change their mind, but that small, incremental change might give them more compassion that will lead to the long term culture change that we need to restore our rights."

The article then took a turn, giving advice on when not to speak up about views on abortion to avoid being cut off financially.

"Both Schmidt and Matthews stress that young people need to take stock of the situations they’re in and assess whether it's safe to discuss abortion. This can be particularly fraught for young people who may rely on their families for housing, financial assistance, or other resources," Latifi wrote.

"Always assess your own wellbeing," she quoted Schmidt saying. "Make sure you're first and foremost taking care of your health and safety."

The Planned Parenthood employee also chimed in with advice on being "safe" while conversing with family over Christmas dinner.

"You have to think to yourself, has this person been safe in the past when we're talking about things like my right to exist and my right to make choices about my body?" Matthews said.

According to the abortion activist, these discussions are about "your own humanity."

"I do think there's a lot of pressure to have these conversations but you don’t owe anyone a debate over your own body and your own humanity," she added.

Latifi then linked to the Planned Parenthood abortion "fact sheet" to share information that teens can give to their pro-life family members.

The guide showed the abortion provider jumping through hoops to explain away the organization's founder, Margaret Sanger's, highly racist past.

"Planned Parenthood denounces Margaret Sanger's belief in eugenics. Planned Parenthood believes that all people — of every race, religion, gender identity, ability, immigration status, and geography — are full human beings with the right to determine their own future and decide, without coercion or judgment, whether and when to have children," the organization stated.

They went on to "dispel" accusations of racism while failing miserably.

"... it is true that Margaret Sanger made a speech on birth control to a women’s auxiliary branch of the Ku Klux Klan in Silver Lake, New Jersey, in 1926. Sanger was so intent on her mission to advocate for birth control that she chose to align herself with ideologies and organizations that were explicitly ableist and white supremacist," the fact sheet says.

"In doing so, she undermined reproductive freedom Black people, Latino people, Indigenous people, immigrants, people with disabilities, people with low incomes, and many others," they seem to concede.

"However, there is no evidence to support the claim that Sanger supported 'black genocide,'" the guide said, despite the extensive historical evidence to the contrary.

In her promotion of contraceptives, Sanger promoted the controversial "Negro Project," and colluded with racist individuals and entities such as the Ku Klux Klan. In fact, her second-in-command at the organization that became the abortion provider we know today, Lothrop Stoddard, was a Klan member who influenced the German Nazi Party by introducing them to the term "Untermensch," the German translation of "Under-man."

Sanger advocated for eugenics, arguing for "the gradual suppression, elimination and eventual extinction of defective stocks — those human weeds which threaten the blooming of the finest flowers of American civilization."

With her undoubtedly racist beliefs, it's not a far stretch to believe that her tactics were used to "genocide" racial minorities.
ADVERTISEMENT
ADVERTISEMENT
teen vogue planned parenthood