In a cell phone video of ​​the violent altercation at Westbrook High School in Beaumont, TX that has gone viral on social media, a teenage boy can be seen viciously slamming another boy's head into a wall before knocking him to the ground and repeatedly punching, kicking, and stomping on him. 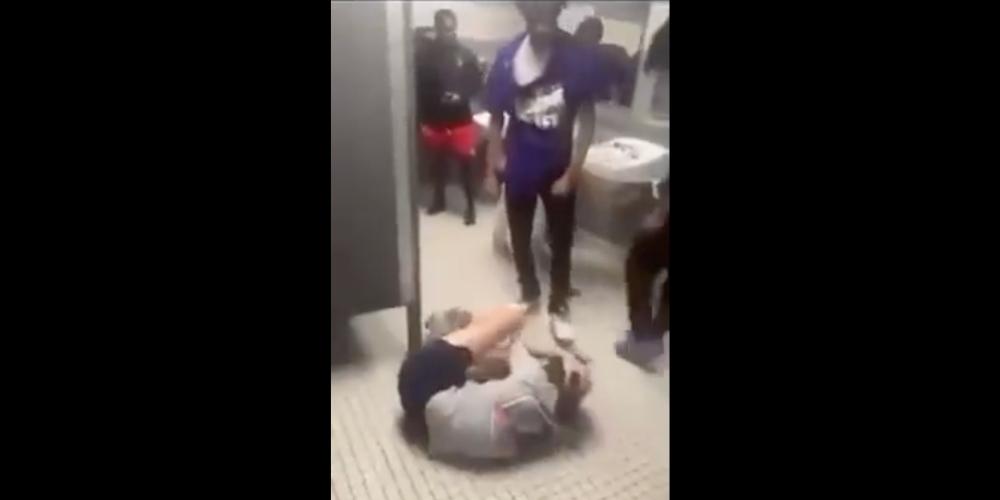 Olivia Rondeau
Sep 14, 2022 minute read
ADVERTISEMENT
ADVERTISEMENT
A Texas city councilman is calling for change after a "horrific incident" took place in a high school bathroom, in which one student savagely beat another into the wall and floor as onlookers recorded and posted the footage online.

In a cell phone video of ​​the violent altercation at Westbrook High School in Beaumont, TX that has gone viral on social media, a teenage boy can be seen viciously slamming another boy into a stall door before knocking him to the ground and repeatedly punching and kicking him. Throughout the short clip, boy attempts to kick away his attacker, and covers his head to protect it from the blows.


Video of another brutal beating that allegedly took place at a high school in Beaumont, TX

This needs to end
pic.twitter.com/M4c8a8Ddsp


KFDM has reported that the perpetrator of the attack is being held at the Minnie Rogers Juvenile Justice Center following the incident.

"Immediately after the incident took place on Wednesday, our officers were able to take the young man into custody and provide the necessary services for the victim, as well as the necessary steps that follow after we take a juvenile into custody."

According to Beaumont City Councilman Mike Getz, more serious steps need to be taken to ensure incidents like this don't happen again.

"A student was brutally beaten in one of the boy's restrooms while other students watched," said in a Facebook post.

Councilman Mike Getz said that the morning after his first day of training to become an ambassador to BISD, he was alarmed to see the harrowing clip of the fight on social media.

"My cell phone was blowing up with people sending me links to a horrific incident at West Brook," he said.

According to the councilman, this attack could've been prevented.

"This is not his first rodeo," Getz said to 12News. "He has been arrested before, but current state and federal law allow these offenders back on campus after a relatively short stay at a juvenile detention facility."

"Being a BISD Ambassador does not mean that you have to put blinders on and live in a world of unicorns and rainbows," Getz said of making the changes he feels are necessary.

Getz also said that he spoke with the BISD superintendent and the District Attorney’s office, and discovered that an already-existing policy of having adult monitors in school bathrooms was not being followed at the time of the incident.

"I am told that policy had already been implemented but that someone failed to show up to monitor the rest room as they were supposed to do," Getz said. "They need to be held accountable."

In addition to ensuring that monitors are placed in bathrooms, Getz also wants the school district to limit the number of students who can go into a restroom at any given time and keep the doors locked during class times.

"For students that need to answer nature's call while class is in progress, they should have to obtain a pass from their teacher and then go to one of a limited number of restrooms available during class time, which will also be monitored," Getz said.
ADVERTISEMENT
ADVERTISEMENT
correct bathroom attack