The biggest threat of election interference comes from Michael Wernick, not Russia

Wernick will serve as the head of a panel of government employees who will monitor this year’s election campaign, on the lookout for fake news and foreign interference. 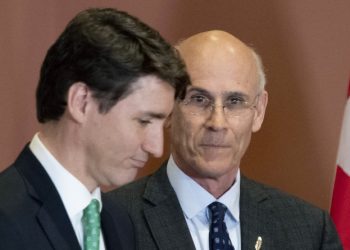 The media let Privy Council Clerk Michael Wernick off easy for his disastrous second testimony, ensuring that the spotlight would be on the testimony of Gerald Butts, which was the real headline event of the day.

That being said, Wernick will serve as the head of a panel of government employees who will monitor this year’s election campaign, on the lookout for fake news and foreign interference. This is even after his disastrous Justice Committee testimony, and calls from the NDP for him to be fired.

That includes what Wernick himself called the “vomitorium” of social media, which has become an important aspect of staying informed of current events in Canada.

Earlier this month, the Ministry of Democratic Institutions defended their choice not to remove Wernick from the panel, saying that they have “great confidence in the integrity of Canada’s public service.”

As if those facts are not troubling enough, recent events have done nothing to improve the apparent trustworthiness of the “Critical Election Incident Public Protocol Panel”.

It is already hard enough to trust the government to monitor social media during an election, but it might become even harder, considering who else will be on the panel.

The Trusted Guardians of the Election

Next is Chrystia Freeland‘s deputy, from the Ministry of Global Affairs.

Rounding out the panel will be the PMO’s National Security Advisor.

Domestic interference is no better than the foreign kind

Especially in hindsight, the formation of the panel seems analogous to cutting off your arm in order to avoid the risk of getting frostbite in your fingers.

The reason why foreign interference in elections is such a big deal is not because foreign perspectives always have sinister intentions. The real problem that foreign involvement would have an inappropriate influence on the democratic process.

Imposing a different form of inappropriate influence in the democratic process is not acceptable simply because it is from within our borders.

Canadians saw in Wernick a man who came to the Justice Committee with a mission to deliver a sanctimonious lecture to Canadians.

It was a lecture that told Canadians that criticizing their leaders was unacceptable, that was dismissive of the reasonable concerns of most Canadians, that disparaged a growing form of public dialogue that he was to be monitoring, and that was as sarcastic as it was combative.

Here is a man who brought social media criticism, some from elected officials, to a parliamentary committee as evidence of a need to monitor the election for… foreign interference?

Is this a man who has the calm and nerve to make thoughtful and unbiased decisions concerning the boundaries of political public discourse during an election campaign?

Do the Liberals’ still have such hubris that they would expect Canadians to let this one go?