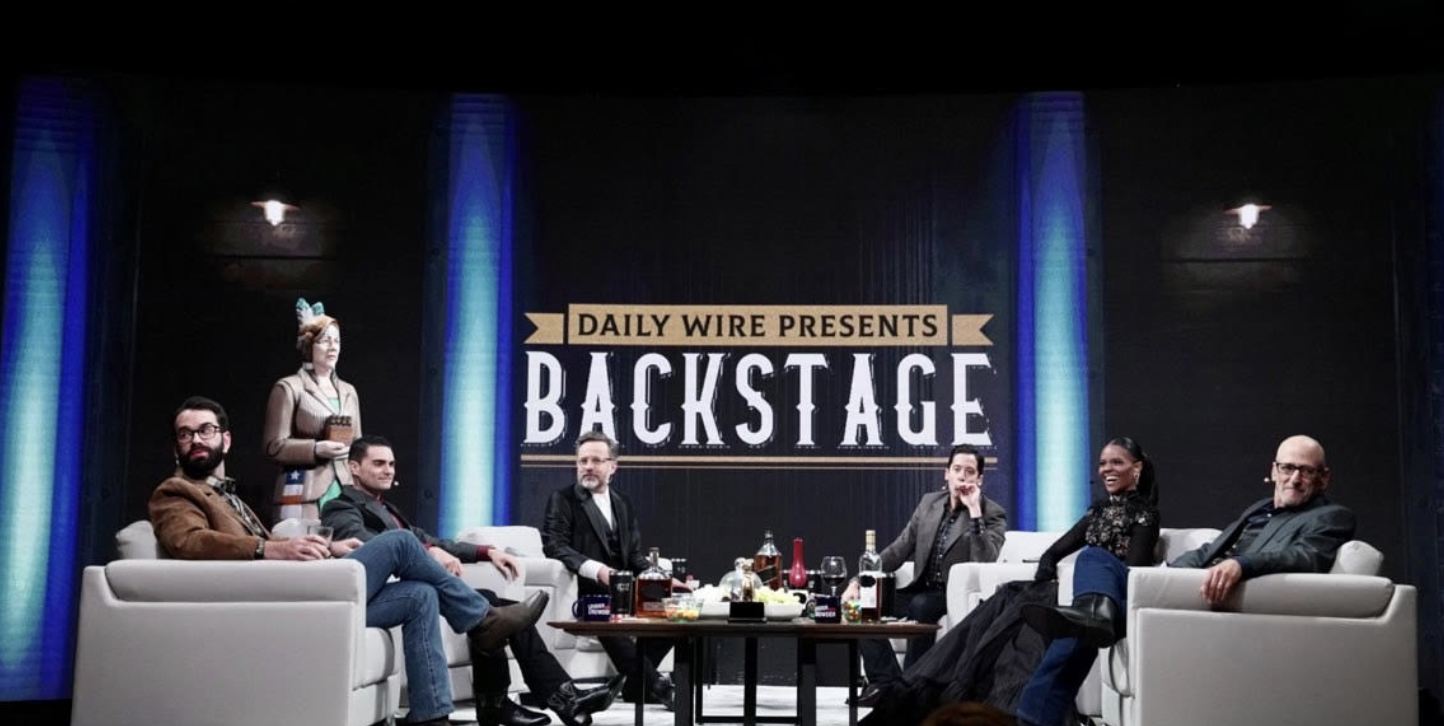 It's no secret that The Daily Wire has been launching more cultural offerings alongside its usual news coverage. So when they announced a live theater event in Nashville, we were intrigued to say the least. It's been a while, because of the pandemic, and the last Backstage Live was pre-COVID lockdowns.

The event was at the Ryman Auditorium, and according to our usher, management told ushers during a meeting that "y'all might not like what you hear tonight." Nashville is a liberal town, the usher said, and not everyone in the red vests is "on your side." He said he was.

As the sold-out crowd filed in and took their seats, a chant of "let's go Brandon" erupted. The chant would come out organically three times that night. There was no doubt as to where the audience's allegiance lie. And when Ben Shapiro walked out on stage in a black cowboy hat, the crowd went wild.

A standing ovation broke out for The Daily Wire's personalities, Candace Owens, Michael Knowles, Andrew Klavan, Matt Walsh, Jeremy Boreing, and Ben Shapiro, as they took their seats around a coffee table on stage. The Daily Wire has come a long way, and they were reveling in it; their audience was as well. It was an opportunity for the crew to celebrate their achievements to date, and announce what they have planned for the future.

In a salon-style setting, the six slammed the Biden administration for their confusing, illogical policies on Covid and their destructive plans to remake American society and the economy. They decried the lockdowns that have been placed on so many blue states, from California to New York, and internationally in Australia and Canada. This was contrasted by the audience, sat close together on the wooden benches of the Ryman, who were unmasked and basking in their liberties in the free state of Tennessee.

There is a hunger for content that counters the going power structure, whose leaders have made promises they can't fulfill, and in many cases told outright lies. Biden and his coastal elites in propagandist media continue to sell their plans to an American public that is divided between those who want to be told what to do and those who want to live on their own terms within the American context. And in many ways, they've turned it into a religion.

"The god of the left is an angry god," Boreing said. He took aim at the constant grievances from internet denizens, and their feeling that everyone else is to blame for their complaints. "People now believe that they should be able to go through life without ever being offended," he said.

People want answers, and these pundits and commentators sought to provide them. The difference between the answers provided by the current leaders, authorities, and officials and those that Shapiro, Knowles, Owens and the others brought forth is that there are values underscoring their ideas. Owens said that cancel culture is a means to keep people in a state of perpetual childhood, that people aren't allowed by the internet mob to move on and grow up.

"The left is engaged in wholesale rewriting of reality right before our very eyes," Boreing said. But The Daily Wire isn't having it. They won't join in the new reality, instead they intend to hold fast to the values and ideals that made American culture the hope of liberty-seekers worldwide.

To that end, the night was about launching new content, new kinds of content, and continuing the build-out of what has become a rather impressive media empire. In addition to investigative journalism, which was a promise Shapiro and Boreing made to subscribers just about a year ago, The Daily Wire announced new shows and programming. A new show headlined by Adam Carolla is on the docket, and Carolla took the stage and performed a set that was funny and decidedly unwoke, giving a glimpse into what that show has in store. He previewed that the first episode will feature Jay Leno.

"I love what you guys are doing," Carolla said as Shapiro and Boreing announced the show, noting that it's especially heartening for "outliers" like himself, who are constantly on the verge of being kicked out of the cool kids table.

Actress Gina Carano's new film was announced from where she is, on location, in Montana. Terror on the Prairie is set for a 2022 release. The horror film Shut In looks as fearsome and slick as any Hollywood blockbuster, but without the grievance culture and social justice nonsense that has become so pervasive from those creators.

The Daily Wire isn't just regurgitating the problems we all know exist, but is providing solutions and strategies we can all use to take back a real stake in American culture.

"We have to build our own economy," Boreing said.

"If they say that half the country 'you can't,' that half of the country needs to say, 'Screw you, we will!'" he told the crowd to applause and cheers.

The message was loud and clear, that the right needs to build its own culture, its own offerings in entertainment, commerce, and other avenues, and it needs to be based in something other than the depravity and moral debauchery of the leftist culture. And he wasn't afraid to say that traditional values need to be at the core of this movement. "You've got to have guts," Boreing said.

Boreing saved the most important message of the night for the last. It was a benediction of sorts.

In our current cultural context, with all of the restrictions, cancelations, mobbings, witch hunts, and censorship, conservatives are uniquely situated to fight back and create an alternative culture worth consuming.

Talent like Carano and Carolla will continue to migrate to the side that allows them to express themselves. As scolds of the woke cultural revolution continue their deplatforming, the conservative counterculture being built by The Daily Wire will continue to grow in scale and appeal.

This is the way.