There is a literal dumpster fire on Parliament Hill

While the Trudeau government scrambles to put together a coherent response on the dropping of the Mark Norman charges, there is a literal dumpster fire going on on the grounds of Parliament Hill. 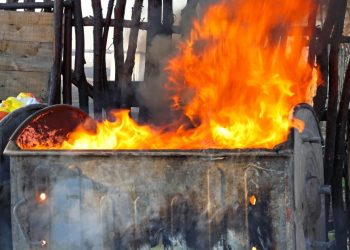 While the Trudeau government scrambles to put together a coherent response on the dropping of the Mark Norman charges, there is a literal dumpster fire going on on the grounds of Parliament Hill.

According to officials of the Ottawa Fire Service the fire which was described as a “very small incident” was reported as under control.

The fire was ignited as construction crews worked on the centre block renovations.

While the literal fire was put out with relative ease, it is uncertain whether the Trudeau government will be able to evade the inferno threatening to engulf the party over the Norman accusations.

Yesterday, Crown prosecutors claimed that new evidence exonerated the Vice-Admiral charged with breach of trust over a leak on government ship building contracts.

Critics have suspected that the latest developments are an attempt to evade further disclosure of evidence which might further implicate the Trudeau government in attempted political interference in the justice system.

Surely Justin Trudeau must be feeling the heat and a literal dumpster fire might just seem like promise of what’s to come for his ailing government.