The fascinating history of Indigenous alphabets

Though the connotations surrounding white men and Indigenous Americans is not a particularly good one (and probably for good reason,) the records show Evans to be a man of God who sought to help indigenous communities. 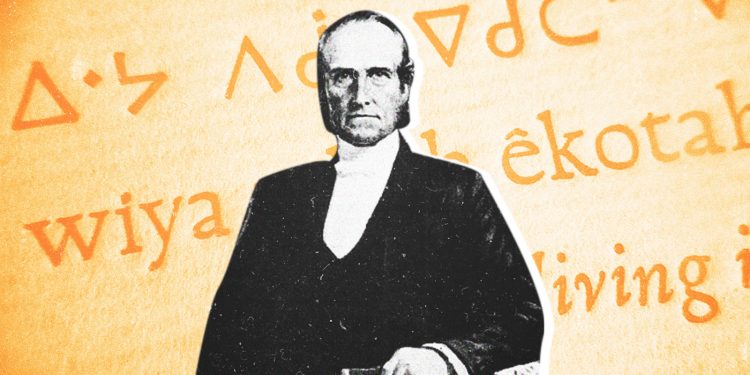 One thing that has always fascinated me about the Inuit people was their strange, seemingly alien alphabet. Every day on my walk to work, I’d see a van with strange triangles and swooping hooks that were instantly recognizable.

As I’ve since learned, this alphabet isn’t used solely by the Inuits. According to Nunavut’s official website, “Inuktitut” is written in “syllabics, a phonetic form of writing that was developed by Rev. James Evans for the Cree, adapted for the Inuit in the latter part of the 1800s.” Their website goes on to say that Rev. Evans’ writing system has “one or two minor problems … but on the whole, it is accurate.”

Evans is credited as being the creator of the syllabics system for the Ojibwe language, the Cree Language, as well as the Inuktitut language. His writing systems were based on Devanagari—an ancient language dating back nearly 2000 years—and Pitman shorthand, an abbreviated symbolic writing method.

Though the connotations surrounding white men and Indigenous Americans is not a particularly good one (and probably for good reason,) the records show Evans to be a man of God who sought to help indigenous communities. Some historians go so far as to credit Evans with greatly aiding in “ensuring the survival and spread” of their language and its syllabic system.

The end of Evans’ story though, is not one to envy.

Sometime in 1844, while he was on a trip to the north country to counter the efforts of Roman Catholic missionaries, Evans accidentally shot and killed his most trusted interpreter, Thomas Hassall.

After the incident, Evans’ character had drastically changed due to the emotional disturbance he felt. He focused his attention on aiding the sick, as his daughter had married off and no longer lived with him. According to Biography.com, this resulted in him taking care of several sick native girls. This coincided with high tensions with the Hudson Bay Company and turned to an openly hostile relationship.

During this time, rumours began to circulate that James Evans was having inappropriate sexual conduct with the same native girls he was taking care of.  This was proven to be a ploy by the church to discredit and incarcerate Evans, due to his unwavering dedication in helping the sick.

Evans was eventually found not guilty. The judge ruled, though, that his caring for sick girls in his house was “imprudent.” Evans was again sent to London for additional submissions and charges, where he’d have to face trial again.

Upon arriving in London in October, Evans was examined by the society’s secretaries, where they too found him innocent of sexual misconduct, but stated that his treating the native girls in his home with the same familiarity as he treated his daughter had been unseemly and improper.

Despite his uninspired ending, which involved a stress-related heart attack just days after being found not guilty, Rev. Evans’ story reminds Canadians that it’s not all black and white, all of the time. There are Canadian figures that go unknown, whose impact may not ever be fully acknowledged. Though history has forgotten him, his alphabet will live on for years to come.

Evolution of the language situation in Nunavut

The Inuktitut language is on the rise in Canada’s north. Individuals with an Inuktitut mother tongue represented 65 percent of Nunavut’s population in 2016, according to data released yesterday by Statistics Canada.

While this is a decrease of the 72 percent figure found in 2001, the number of people who could fully conduct a conversation in Inuktitut rose from around 6000 in 2001 to 27,320 in 2017, representing 77 percent of Nunavut’s population as a whole.

Inuktut’s use of a main language is declining while its use as a secondary language is increasing. According to Statistics Canada, “in 2016, 74 percent of the Nunavut population (26,270 people) reported speaking Inuktitut at home at least on a regular basis. This was up slightly from 2001 (73%), when 19,480 people reported speaking Inuktitut at home.”

These figures coincide with the rise of English in Nunavut among the Inuit people especially. In 2016, 82% of Inuit were bilingual (Inuktitut–English), up from 76% in 2001. Most Inuit (58%) spoke more than one language at home (Inuktitut and English in nearly every case) in 2016.