I could have closed YouTube. But I can’t turn off my country. If you made it through with your will to live still intact then pat yourself on the back. 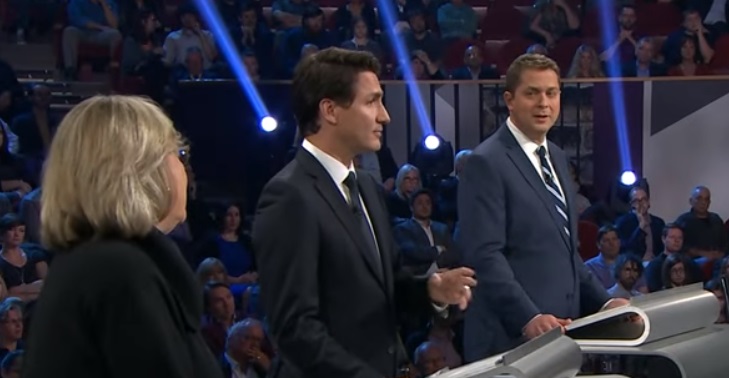 I shouldn’t have clicked that link. I don’t know why I did.

Perhaps, I thought, it was fate that I happened to have just put on the kettle and logged on to YouTube as the livestream popped up in my recommended feed, the leaders only three minutes away from being brought out. Perhaps, I thought, it would save me from having to find something to watch with my evening snack.

What a horrible, horrible mistake.

Between the hollow talking points, incompetent moderation, uninteresting topics, and even more uninteresting individuals gracing the stage, I felt as though I had been plunged into a Dantean hellscape from which there was very little return. Sure, I could have closed YouTube. But I can’t turn off my country.

Andrew Scheer had somehow managed to wipe off the annoyingly perpetual smile sewn into the fabric of his chubby Saskatchewan cheeks long enough to attack Justin Trudeau within the first 20 seconds of his speaking time, to the complete neglect of the question he had been asked.

It was a move so cringe-inducingly amateur that I audibly moaned in a physical manifestation of psychological pain. It would be a foreshadowing of the remainder of Trudeau and Scheer’s interactions…

In a void, as though they were wounded lovers hurling poorly executed insults at each other in a hotel room. Even when interacting directly with a different leader, there would very rarely be a lost moment when the conversation would not be brought back around to the apple of their eye.

We’ve all heard of the Bechdel Test, in which representations of women in art are measured by whether the works feature two women talking about something other than a man. Surely there’s got to be a Canadian Debate Bechdel Test – are the Conservative and Liberal leaders talking about something other than the Liberal and Conservative leaders, respectively? Last night’s debate failed my imaginary test at least 90% of the time.

Not that the other 10% was any better, mind. I recall Trudeau whitesplaining racism to Jagmeet Singh as Singh seemed unable or unwilling to challenge Quebec’s secularism law. I am sure I was not the only person waiting in nail-biting anticipation for Trudeau to speak knowledge on his own lived experience as a man who also wears a turban, sometimes.

At one point, the reality of the two-party system became so obvious that it seemed like Elizabeth May and Jagmeet Singh – God rest their souls – were almost appealing to Trudeau and Scheer as undecided voters, and they certainly were being addressed as such.

Trudeau stared down his long, crooked nose at Elizabeth May, smug smile draped across his now-uncharacteristically pale face, as she actively told him he would win the election. In that moment, she was not the leader of a federal party, but rather a grandmother who had stumbled out of her duplex in her nightgown when she saw her MP doorknocking, hoping to  appeal to his good graces. I could almost hear her, shaky voice echoing off the suburban drive, “Change your policies, Sir. I’ll vote for you this time. But you get your act together, young man. No, I won’t take a lawn sign.”

Logging on to Twitter, a tweet from the Conservative Party ended up on my feed via a followed account. “Andrew Scheer WINS debate!” it read, citing no one, sourcing nothing. I have no doubt other parties were doing similar unreferenced victory laps about their leader’s debate performance. Farcical.

If you made it through with your will to live still intact then pat yourself on the back.