The unmarked graves of the Charles Camsell Indian Hospital

After all this time, nearly 75 years since the first “Indian hospital” was opened, many First Nation families are still looking for answers. 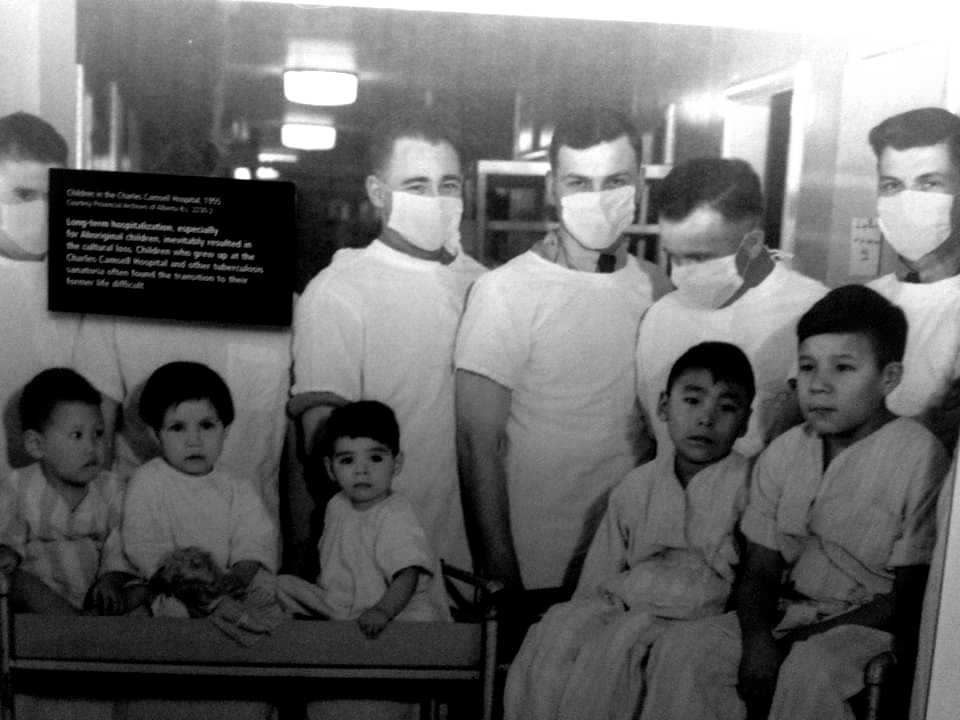 In 1946, the Charles Camsell Indian hospital was opened in Edmonton as part of the twenty-nine "Indian hospitals" that were established and operated by the Canadian government between 1945 to 1981, exclusively for Indigenous peoples.

The Canadian government segregated Indigenous people from the rest of society in substandard hospitals which were massively overcrowded, improperly staffed, and rife with physical and sexual abuse.

Former patients allege horrific conditions such as being tied or shackled to their beds for weeks or months on end while being subjected to inappropriate treatments and physical and sexual abuse. Many of the patients were also children.

The Hospital officially closed in 1996 and is now being renovated into an apartment complex. This seems to be a step forward in reconciliation for some parties, but for some of those still affected by the hospitals legacy, more time is required to move on.

A class action lawsuit was filed last year, alleging that the Canadian government failed to properly oversee the activities in Charles Camsell and the other 28 “Indian hospitals,” resulting in patients that suffered from sexual and physical abuse at the hands of male technicians.

The lawsuit alleges that patients were left with severe physical, psychological and emotional injuries.

The claim is led by former patients who were admitted to an "Indian hospital" between 1945 to 1981, and their families. It states that Canada was negligent and breached its fiduciary duties owed to Indigenous patients.

To provide our readers with more information about the Charles Camsell Indian Hospital, The Post Millennial caught up with freelance writer and historian laureate Danielle Metcalfe-Chenail.

TPM: From your research on the Charles Camsell Indian Hospital, what knowledge do you have about the patients that passed away and where were they buried?

DMC: Based on my research over the past few years, the Camsell Indian Hospital (1946-1967, not the newer one) patients who weren't returned to their home communities were collected from the hospital by two funeral homes and then buried in local cemeteries.

For the Protestant patients - especially the Anglican ones - they were buried next to the Edmonton Industrial School in St. Albert. It appears graves were dug by residential school students and tended by them until the school closed down in 1968.

This is now the St. Albert Municipal cemetery and there is a cairn erected with the names and life details (age, date of death, and home community) of those buried.

Some other Protestant patients were apparently buried at Beechmount Cemetery. The Catholic patients were sent over to the Winterburn Mission cemeteries, at Enoch Cree Nation.

There are two cemeteries - generally called the Old Winterburn and Winterburn cemeteries - and unfortunately much of the information about who was buried there has vanished because of fires and the deaths of knowledge keepers like priests.

The Post Millennial reached to Enoch Cree Nation for more information on the Winterburn cemeteries but their resources to find burial plot information were very limited. However, Enoch was able to provide the location and pictures of one of cemeteries showing that there are still a handful of tombstones erected.

Enoch historical records were unable to confirm the burial plot information in either the old Winterburn cemetery or the new one.

Camsell patient speaks about her experience

The Post Millennial spoke to the daughter of a First Nation Chief, Nora Zuvic-Beauregard, whose father passed away while he was a patient at the Charles Camsell Indian Hospital. She is now an elder and residential school survivor.

TPM: Did you or any of your family members stay at Charles Camsell?

NZB: I was a patient there, as well as my father, Maxime Beauregard. He went there to receive a surgery of some kind but something went wrong and he ended up dying from the surgery. This was in 1963.

TPM: What year were you a patient there?

NZB: I was there in 1945. I don’t remember being sick, but they decided to take me away from my parents anyways. When I got out after a year and a half, I had very weak legs because I hadn’t been active enough on account of being in bed all the time.

TPM: How old were you then?

NZB: I was around 5 years old at the time.

TPM: After the passing of your father, what did Indian Affairs say?

NZB: I don’t remember hearing anything from them. They buried him somewhere, but he never came back home. He may be buried in the Winterburn cemetery. It would be nice to bring him back because he was a chief, an important man. He was the chief for 16 years, one of the longest serving chiefs in Bigstone Cree Nation History.

TPM: Was there any information shared on where he was laid to rest?

NZB: There were death records pointing to a potential burial ground in Winterburn that were found in 2017 but so far we haven’t found it.

Archaeologist weighs in on excavation options

To learn more about what options exist for exploring burial sites, The Post Millennial sat down with Alberta based archaeologist Corey Cookson.

TPM: How long have you been an archaeologist?

CC: I have been a professional archaeologist since 2013 when I started working for Tree Time Services Inc. Before that I went to MacEwan University to obtain my Bachelor of Arts (2005-2009) and the University of Alberta to obtain my Master of Arts (2011 to 2013).

TPM: Where in Alberta have you worked?

TPM: What type of technology do you use to determine a burial site?

CC: We can use Ground-Penetrating Radar, which is a process that sends radio waves through the ground. As these radio waves pass through the ground, any change in the subsurface materials will cause some energy to be reflected back towards the surface while the remaining energy continues deeper. The information can be converted into a depth for the disturbance or object under the ground.

I recently conducted a GPR survey as part of a project for the Archaeological Society of Alberta and a local community, and we identified 8 previously unmarked graves, one of which may have been a mass grave associated with the Spanish Flu pandemic during the First World War.

TPM: Do you think that burial sites should be included into BILL C 391?

CC: Absolutely I do, it is a major step in decolonizing the process of archaeology where the Indigenous people of Canada had no say in how their ancestors were treated. The fact that we don't have federal legislation protecting and repatriation Indigenous remains is quite surprising to me, especially since NAGPRA has been a thing in the U.S. since 1990.

TPM: Should this include protection and repatriation of indigenous burial sites?

CC: I believe burials should not be disturbed unless it is at the request of the descendant community  or threatened by natural or cultural disturbance. The recent example from the town of Viking, Alberta, where a 19th century burial of a First Nations woman was encountered in a farmer's field, shows how the process can be done where First Nations Elders were consulted and all ceremonies and protocols are followed.

After all this time, nearly 75 years since the first “Indian hospital” was opened, many First Nation families are still looking for answers. Will they ever find the places where their loved ones were buried? Why were they brought to the hospital as children in the first place? No one can know for sure.

However, having the federal government acknowledge the wrongs that took place under the “Indian hospital” system and commit to work with Indigenous people to try and find some answers to these important questions would be a good place to start.

The passage of Bill C 391 and the protection of Indigenous burial grounds would be an excellent first step.