Obesity has been found to increase the risk of severe COVID-19 symptoms and impair the body's ability to create antibodies, which causes the overweight population to be more susceptible to mutations of the virus. 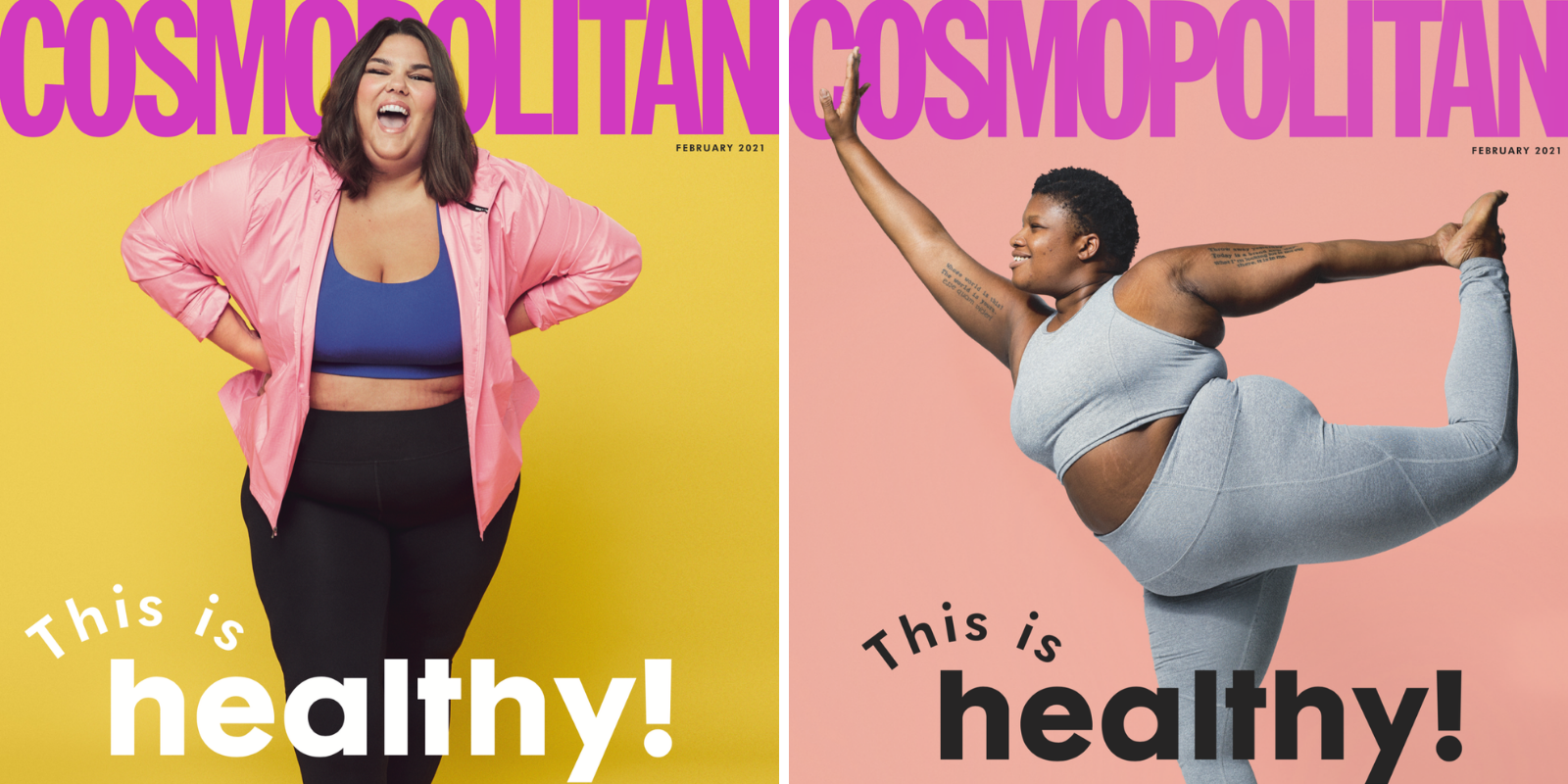 After profiling more than a dozen women who supposedly prove wellness isn't "one size fits all," Cosmopolitan is facing backlash for suggesting there is nothing unhealthy about being overweight amid COVID-19 obesity risks.

The publication spotlighted 11 women who represent the so-called different "shapes and sizes" of "fitness."

Cosmopolitan's concept of "healthy" has morphed radically over the years. An old issue of the magazine was dedicated to "Health and Happiness," featuring thin Golden Age actress Audrey Hepburn. The layout covered a list of "safe diets," how 10 celebrities stay fit, and food neurosis.

"'Healthy' can be a loaded word. We asked these women to open up about their personal journeys to reclaim "healthy" as their own," Cosmopolitan wrote in a preface to the New Year's Day piece.

Social media influencer Callie Thorpe, one of the internet's "best-known advocates of self-love," told Cosmopolitan: "Plus-size people often feel like they can't be part of the wellness space. We are trolled for being fat, then can feel excluded from exercise because our bodies don't fit the narrative."

Her journey started with her diet blog in 2012. "I thought if I made myself accountable to strangers, I'd [lose weight]. It made me feel worse than ever," she said.

Thorpe now adheres to the "body neutrality movement," which focuses on what her body can "do" rather than how her body "looks."

Cosmopolitan wrote that yoga teacher Jessamyn Stanley has become a "superstar in the American wellness industry "thanks to her inclusive attitude."

Stanley noted that she has embraced her body size and has learned to tune out "fatphobic comments" on Instagram where she has amassed 450,000 followers and encountered drawbacks to the attention.

"I've had to accept that's how the mainstream sees me and not try to change. For me, that's been very therapeutic," Stanley stated.

However, social media users are chewing out the magazine for peddling this mentality.

"The body positivity movement preys upon & exploits woman who are insecure about their weight. Telling overweight people they can be perfectly healthy without losing weight may be a great way to sell magazines, but it's a crappy thing to do if you care about public health," wrote Lauren Chen.

"This is how the left has warped so many minds: we're told if we fail to *celebrate* obesity it means we *hate* obese people," commented Lyndsey Fifield, the Heritage Foundation's social media manager and the LadyBrains podcast's co-host.

"This is, of course, absurd—but people fear being told they're hateful. 'I don't hate anyone!' they protest; 'ah good—you must be fat-positive!' they reply," Fifield continued, mimicking the mob.

She clarified that bullying is cruel and abusive. "[B]ut instead of fighting to stop bullying" and encouraging unfit individuals to exercise and eat better, the public justifies unhealthy behavior.

Others contended that there's nothing unhealthy about being overweight. The claim is not just wrong, but also irresponsible.

"I'm just tired of pretending true things aren't true. In this and many other areas of life," added self-described "anti-feminist" Inez Stepman who serves as a senior policy analyst at the Independent Women's Forum.

"The new administration's COVID-19 task force ushers in a new day for science and evidence-based policy-making," Lightfoot captioned the parody video at the time, emphasizing her hope "to ensure the health of all Chicagoans."

"I won't stand for this absurd celebration while smokers are cast out into alleys and parking lots," Haydon asserted

"They want you to be unhealthy, obese, and uninformed," quipped Gina Bontempo, trainer, health coach, and the manager of BlazeTV's Candace Owens.

"... and at a time when THE SINGLE GREAT EAT COMORBIDITY affecting COVID DEATHS in the United States is OBESITY. Our media cannot be trusted AT ALL," another Twitter account chimed in.

"Why is Cosmopolitan trying to kill obese people, who are particularly vulnerable to Covid?" questioned The Post Millennial's Ian Miles Cheong.

Obesity has been found to increase the risk of severe COVID-19 symptoms and impair the body's ability to create antibodies, which causes the overweight population to be more susceptible to mutations of the virus. A paper published in July concluded that obesity was the most common comorbidity among COVID-linked deaths.

"You have a higher chance of dying from China Virus because you're fat than not wearing a mask," St. Clair pointed out.

Ahmed noticed in April that seemingly every critical care specialist attending COVID-19 patients in the intensive care wing over the previous two weeks made the same observation. Critical care doctors in other parts of the country, as well as colleagues in Europe, reported the same sightings, Ahmed wrote.

The associate professor of medicine at the State University of New York (SUNY) argued: "Americans have long struggled with weight as a national and individual issue. But in a time of pandemic, it has devastating implications."

Ahmed urged the nation to focus on biological and metabolical faculties that influenza infections target. Research on the latter demonstrated that the "obese may be more contagious," she said, "by increasing the timeframe in which they continue shedding a virus after an infection, with huge implications for mitigation strategies." She then extended this discovery to the coronavirus, "because the immune defects are the same."

During the pandemic, health programs that help Americans get on the move "can not only improve an individual's health, but protect against successive waves of coronavirus infection," Ahmed maintained.

"Now more than ever, getting into shape has become a matter of urgent national public health security," the expert advised.

This isn’t the first time that Cosmopolitan has celebrated plus-sized bodies. In 2018, the outlet's cover starred obese model Tess Holliday. The expose was widely criticized for advocating for an unhealthy lifestyle. Holliday was unapologetic for her appearance and lashed out at the "horrible people" who were "whining about how me being on the cover of a glossy magazine impacts your small-minded life."