Abortion has been legal in Canada for 50 years, with former Prime Minister Pierre Trudeau decriminalizing and removing some restrictions on the practice in 1969. To date, there are zero laws governing abortion on the books. 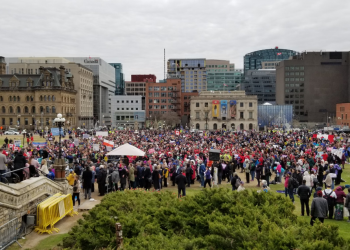 Today, pro-life Canadians from across the country gathered in the nation’s capital for a march against abortions in Canada.

The march, which some estimates had at over 10,000 participants, started off with a rally on the steps of Parliament Hill, featuring a wide variety of speakers like politicians, priests, activists, abortion survivors, sexual assault victims, and mothers who have aborted their children.

One notable guest included Abby Johnson, a former Planned Parenthood worker whose transformation story from pro-choice to pro-life was recently released in video format via the movie Unplanned.

In her talk, she took direct aim at the media, calling on them to report the thousands of pro-life marchers instead of the couple hundred pro-choice protesters.

Johnson also criticized church leaders in Canada saying it was time for them to “stop cowering in the churches and lead on this issue.”

“Young people are the future of this movement,” said Johnson, calling on them to speak up for life in their schools. “If abortion is going to end, it is not going to end in the halls of Parliament. It is going to end because each one of you raised your voices and said ‘Enough! No more death, no more evil, not on our watch!'”

The march itself got underway around 1:30 P.M., with thousands of people pouring into the streets to march through downtown Ottawa.

While the pro-life movement has historically been criticized as being nothing more than a bunch of old, white men trying to control women’s bodies, the diverse ages and races were on full display in this year’s March for Life.

As other media outlets have noted, the growing presence of young people at the pro-life march is new trend that comes along with the rise of Generation Z (1997-2010).

This generation, also known as “iGen” or “Post-Millennials,” are often broadly described as “conservative” when compared to their older Millennial siblings. According to Pew Research, they are also the most racially diverse and well educated generation yet.

Other pro-life marches were also held across the country in solidarity with the Ottawa one, with events taking place in Toronto, Edmonton, and Victoria as well.

Abortion has been legal in Canada for 50 years, with former Prime Minister Pierre Trudeau decriminalizing and removing some restrictions on the practice in 1969. To date, there are zero laws governing abortion on the books.