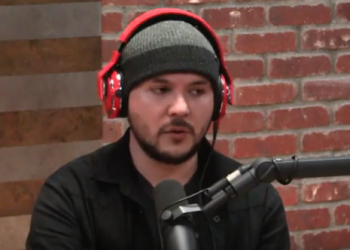 Today on the Joe Rogan Experience podcast, Tim Pool and Joe Rogan unleashed a torrent of research and specific proof that seemed to confirm that Twitter is censorious, has a bias against conservative users and operates with ideological blinders on.

The guests on the podcast were independent journalist Pool, Twitter boss, Jack Dorsey, and Head of Trust and Safety, Vijaya Gadde.

Rogan suggested to Dorsey and Gadde that by choosing to forbid linguistic acts such as “deadnaming” and misgendering” Twitter has, in effect, created a protected class. Rogan pointed out that the gender debate is a legitimate debate within the liberal and progressive communities. And by favoring the ideology of trans people over radical feminists, Twitter was not operating in good faith.

Pool invoked the Ray Bradbury novel Fahrenheit 451, suggesting that Twitter’s terms of service, which skew toward censorship will lead to totalitarianism.

Dorsey countered that Twitter’s mission was that of creating healthy conversations. When Pool asked how they determine what is healthy, Dorsey mentioned four metrics that they are working on while conceding that there is much work yet to be done.

Rogan brought up Martina Navratilova, who is currently being harassed for her point of view that biological males should not compete against biological females in athletic competitions.

Both Pool and Rogan brought up deplatforming. While characters such as Alex Jones and Milo Yiannopoulos may not garner much sympathy, a situation like Meghan Murphy’s does. Murphy is the Canadian feminist who was permanently banned for “misgendering.”

Pool compared and contrasted deplatform artist Oliver Darcy, celebrity troll Kathy Griffin, and many other left-wing Twitter users who were guilty of calling for violence against the Covington Catholic school boys, to Murphy, who simply said “men aren’t women though.”

“She (Murphy) was warned multiple times for misgendering an individual,” Gadde said (there is currently a publication ban on the individual in question).

But Gadde eventually conceded that she would like to think of suspensions as temporary and is prioritizing a move toward letting people back on to the platform. She also mentioned that Gavin McInnes may be a good test case for replatforming.

Pool proposed a jury system of random users to adjudicate controversial bans such as Murphy’s.

“Right now we have a system that relies on people to report it to us, which is a huge burden on people” Gadde said, hinting that there would be a move toward algorithm-based adjudication.

It was disclosed that Twitter has 4000 employees. Of whom there is a “small team” that read tweets. Dorsey would not disclose a specific number.

Pool told Dorsey and Vijaya that foreign powers are using Twitter to influence American culture and democracy – pointing to the fact that American citizens who get deplatformed from Twitter are not allowed to participate in a vital component of American democracy, while foreign bad actors are.

Pool pointed out to Dorsey and Gadde that if they are going to restrict American citizens from expressing themselves on what is basically a public utility, Twitter will face regulations, adding that Twitter as a platform is too powerful to not be regulated.

Gadde countered with: “I spend a lot of time in DC. Lawmakers are also in favour of policing harassment and abuse online.”

Pool shot back: “You’ve monopolized public discourse to an extreme degree and you say ‘my way or the highway.’ You should not have the right to tell people are allowed to say. I’m a social liberal. I think you should be regulated – you guys are unelected officials running your platform as you see fit against the will of a democratic republic … I’m frustrated because of the hypocrisy. I see people burning signs that say ‘Free Speech.’”

“I think we have a lot of work to do to explain when we’re taking action and why. And certainly looking into mistakes that we made in those particular situations.” Gadde contritely responded.

Pool and Rogan brought up The Proud Boys, "Learn to code," Patreon, the continual smearing of Jordan Peterson, the false PewDiePie Nazi narrative, the debunked Data and Society "Alternative Influence Network" report, the Covington boys and other controversies to illustrate how everything is flowing in one direction—meaning that the far left is censoring and smearing centrists and the right on social media.

Pool asked Gadde if Twitter takes the advice of the Southern Poverty Law Centre (a watchdog group notorious for defaming conservatives and centrists as racists). Surprisingly, Gadde responded that Twitter was aware of the flaws of that particular organization's research, but conceded that they "certainly reached out" to Twitter.

Dorsey said that he wanted to clarify that he was not saying that Twitter was doing the right thing, simply that they were there to describe why.

This particular episode of The Joe Rogan Experience was a fascinating and in-depth look at one of the primary battlefields of the culture wars. One hopeful note was that Dorsey and Gadde seemed to understand that they were susceptible to their own biases, and seemed genuinely open to the possibility of making corrections in the future.

One thing that seems clear to me is that if Gadde and Dorsey were as sincere as they appeared, and if they heeded Joe Rogan's appeal to be reasonable, then Meghan Murphy should be reinstated by Twitter tonight.