Schumer argued, "Talk about [the] shortage of workers — one of the main reasons is how Trump cut back on immigrants, both documented and undocumented." 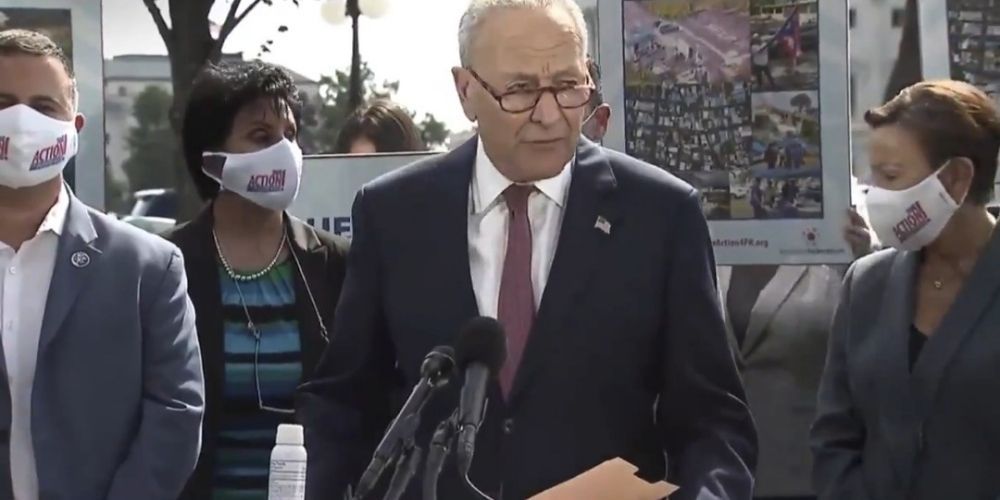 Schumer claimed a significant reason for the labor shortage was "how Trump cut back on immigrants."

"The American people understand that fixing our broken immigration system is a moral imperative [and] also an economic imperative because immigrants are so important to our economy," said the top Democrat.

Schumer and fellow Democrats worked diligently with the Biden administration to pass progressive immigration reform as part of the president's $3.5 trillion spending plan, reported the Blaze. They sought green cards and a pathway to citizenship for approximately 8 million immigrants from four categories: "Dreamers," those with Temporary Protected Status, farmworkers, and essential workers.

However, that plan fell through over the weekend after two moderate Democratic senators — Joe Manchin (WV) and Kyrsten Sinema (AZ) — signaled they might block the spending package.

On Sunday, Senate Parliamentarian Elizabeth MacDonough dealt another blow to President Biden and his Democratic counterparts, stating immigration reforms could not be considered within a budget reconciliation because they would amount to "by any standard a broad, new immigration policy."

She concluded: "The policy changes of this proposal far outweigh the budgetary impact scored to it, and it is not appropriate for inclusion in reconciliation."

Schumer called the decision "extremely disappointing.” He hoped to apply political pressure as the US economy grapples with the ongoing labor shortage and slow economic recovery from the COVID lockdowns.

"Talk about [the] shortage of workers — one of the main reasons is how Trump cut back on immigrants, both documented and undocumented," he argued.

"It saddened me, it frustrated me, it angered me, because so many lives are at stake. But, make no mistake, the fight continues," he said.