Tory would later appear on Breakfast Television, where he said that he had "absolutely no idea whatsoever what the controversy is about here." 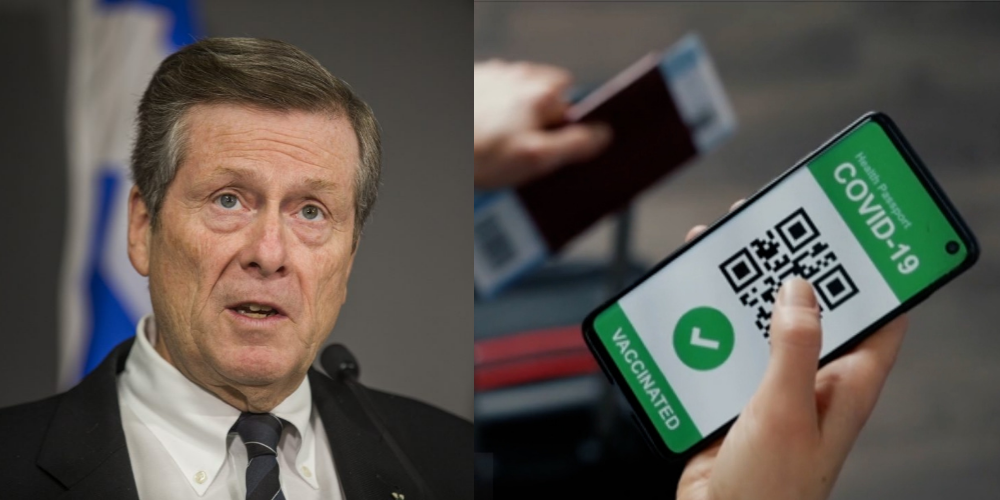 Toronto Mayor John Tory is calling on the Ontario government to develop a vaccine passport, stating that proof of COVID-19 vaccinations are increasingly becoming required for travel and "other activities".

Tory told CP24 Wednesday morning that "the bottom line is that if there are people including government who are going to ask you to show that you’ve been vaccinated or not."

Tory would later appear on Breakfast Television, where he said that he had "absolutely no idea whatsoever what the controversy is about here."

"As just a practical means, then the same government, the provincial government in this case, has to provide something to people to be able to show they’ve been vaccinated."

When asked if the City of Toronto would introduce its own vaccine passport, Tory said that the province is better suited to develop one. Adding, "The province has all of the records in their system of exactly who got vaccinated, where and when and how many times."

However, the Ford government has so far rejected a provincial vaccine passport. Ontario's top doctor said on Tuesday that vaccine passports were not needed "at this time".

Some Toronto establishments have already decided to require proof of vaccination, including Seneca College, which will mandate COVID-19 vaccines for students and staff who wish to be on campus. A Toronto strip club will also require patrons to be vaccinated.

To many, it comes as no surprise that Mayor John Tory, whose city has been under the longest lockdown in the world, that includes an indoor dining ban of over 400 days, favours vaccine passports.

However, others are worried about such plans, with concerns about medical privacy and discrimination. Federal and provincial privacy commissioners have issued warnings about the potential use of vaccine passports.

Human rights groups, including Amnesty, are also worried that vaccine passports would lead to a medical apartheid, where those who have chosen not to take the vaccine would face discrimination and be barred from certain sectors of society.