The Sportswoman of the Year award has never before been given to a biological male, meaning Hubbard's taking of the prize makes a notable mark in the 113 year history of the award. 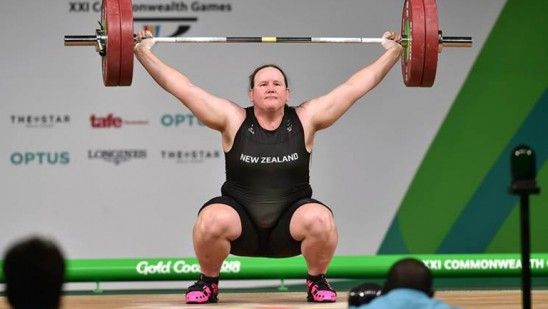 Laurel Hubbard, the New Zealand weightlifter who competes on the women's team, though she is a biological male who identifies as transgender, has been named "Sportswoman of the Year" by the University of Otago.

The award was given to Hubbard on Tuesday. Hubbard was the first trans woman to compete in the Olympics on behalf of a women's team. Hubbard did not win, or place, in the weightlifting events for which the lifter had qualified, surpassing much younger, female New Zealand lifters to gain a spot on the team.

Hubbard received the award from the University of Otago in Dunedin, on New Zealand's South Island. The Sportswoman of the Year award has never before been given to a biological male, meaning Hubbard's taking of the prize makes a notable mark in the 113 year history of the award, according to the Otago Daily Times.

Hubbard was unable to make a successful lift in the snatch and was eliminated from the weightlifting competition. Hubbard told the local paper that she was "grateful for all of the support and kindness received from the teaching staff and students at Otago University."

"It is not possible," Hubbard said, "for athletes to complete at the Olympic level without the encouragement and aroha of friends, family and supporters. This award belongs to everyone who has been part of my Olympic journey."

"We could think of no-one more worthy of sportswoman of the year than Laurel Hubbard who represented Otago and New Zealand incredibly well at this year’s Tokyo Olympics," Otago University Students’ Association president Michaela Waite-Harvey said.

The Sportsman of the Year Award also went to a biological male, Shay Veitch, who "won the long jump-100m double at the national track and field championships in Hastings in March," according to the Otago Daily Times.

After qualifying for the Olympic Games, Hubbard said "I see the Olympic Games as a global celebration of our hopes, ideals and values and I would like to thank the IOC for its commitment to making sport inclusive and accessible."

Many took issue with Hubbard's competing in the Olympics on behalf of the women's team at all. Hubbard transitioned from presenting as a man to presenting as a woman after entering adulthood, at 35 years old. Hubbard has reduced testosterone levels to the point where the International Olympic Committee allows the transgender athlete to compete against women. Hubbard's 2012 transition enabled her to win many titles over the biological women for whom the competitions were made.

Hubbard went on to take the gold in weightlifting at the 2019 Pacific Games, lifting 268 kg, which was 7 kg and 13 kg more than her closest competitors. For comparison, the men's Gold Coast competition was won with a lift of 330 kg.

Hubbard gave an interview in 2017 after placing second in a world championship lifting event. "The rules that enabled me to compete first went into effect in 2003," Hubbard said. "They are known as the Stockholm consensus with the IOC but I think even 10 years ago the world perhaps wasn’t ready for an athlete like myself— and perhaps it is not ready now. But I got the sense at least that people were willing to consider me for these competitions and it seemed like the right time to put the boots on and hit the platform."

The International Olympic Committee (IOC) requires that males who identify as transwomen who want to compete in women's events must have lowered their testosterone levels to 10 nmol/liter for a period of 12 months or more. Hubbard certainly qualifies under those criteria. The IOC does not require that for a male undergo so-called "bottom surgery," or castration, orchiectomy, or vaginoplasty to compete in female sports.

Hubbard, who trounced her Samoan, female competitors in the 2019 games, caught the attention of Samoan Prime Minister Tuilaepa Dr. Sa'ilele Malielegaoi, who appealed to the Pacific Games Council.

Tuilaepa said "I made a public announcement on national TV. I questioned the legitimacy of allowing transgender to lift with women. It is not easy for the female athletes to train all year long to compete and yet we allow these stupid things to happen. The reality is that gold medal belongs to Samoa."