Prime Minister Justin Trudeau was swarmed by protestors Monday during an election campaign stop in London, Ontario. He said he “might have” been hit by gravel as dozens swarmed to vent their frustrations. 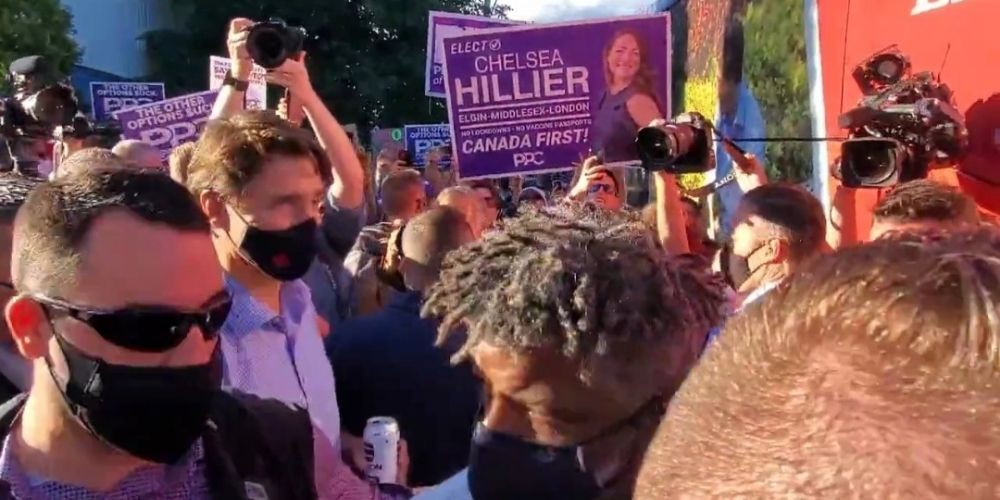 Prime Minister Justin Trudeau was swarmed by protestors Monday during an election campaign stop in London, Ontario. He said he “might have” been hit by gravel as dozens swarmed to vent their frustrations.

As Trudeau left the event, some of the protestors cursed the prime minister supposedly for his government’s COVID health measures and vaccination requirements.

"F*ck you!" shouted a woman angrily at least five times.

Others appeared to throw gravel and debris at Trudeau, forcing his RCMP detail to hold up their hands as he got on his campaign bus. The small projectiles also hit some media members, but none reported any injuries, reported Global News.

Following the ordeal, Trudeau said that some of the gravel “might have hit my shoulder.” He added: “There were little bits of gravel, and I may have been hit. I had someone throw pumpkin seeds at me a few years ago.”

Trudeau’s election campaign has been plagued by angry crowds, forcing the Liberals to cancel at least one event in Bolton, Ontario, last month and postpone several others.

"Yes, there is a small fringe element in this country that is angry, that doesn’t believe in science, that is lashing out with racist, misogynistic attacks," he said. "But Canadians, the vast majority of Canadians, are not represented by them, and I know will not allow those voices, those special interest groups, those protesters to dictate how this country gets through this pandemic."

Trudeau linked Conservative Leader Erin O’Toole’s positions to the "fringe" anti-vaccine crowd. "They don’t get to dictate policy of this government, so it is puzzling to people to see that on vaccines and so many other things, Erin O’Toole is at least taking some of his cues from them," said Trudeau.

He took the opportunity to paint his Conservative rival as ill-suited to lead the country because of his less stringent stance on mandatory vaccination for workers.

On Saturday, Conservative leader Erin O'Toole promised a national proof-of-vaccine system to prove residents received their COVID-19 vaccinations if elected. The move was among several pandemic-related campaign pledges O'Toole unveiled Saturday during a stop in Coquitlam, BC.

O’Toole said he supports COVID-19 vaccinations as safe and effective with a pledge to get the national immunization rate above 90 percent. He also plans to offer rapid testing as an alternative to people who don’t get vaccinated.

Concerning Monday’s incident, he condemned the protestors’ actions "in the strongest terms possible." O’Toole tweeted: "Political violence is never justified, and our media must be free from intimidation, harassment, and violence."

He previously condemned the protests in Bolton, stating: We're a democracy, we should be having a healthy and respectful debate on ideas, and we have no time for people that bring negativity to campaigning."