WATCH: Tucker slams Kamala and Biden over their suspicion of the integrity of the 2022 midterm elections

"Questioning the legitimacy of our elections. Doing to bidding of Putin. Where's Liz Cheney?" the Fox News host asked. "She is always on the hunt for insurrectionists undermining democracy." 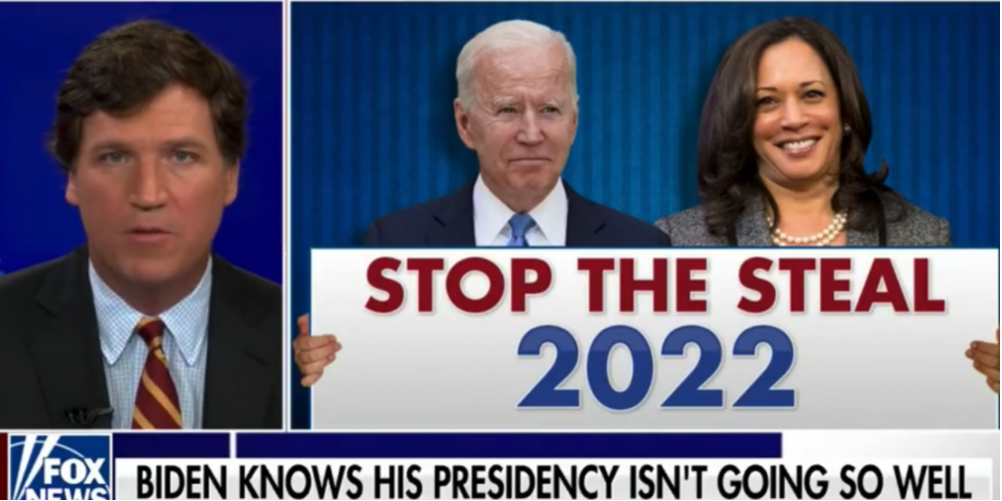 Fox News host Tucker Carlson slammed President Biden and Vice President Harris on Thursday over their suspicion of the integrity of the 2022 midterm elections.

Biden's a full year into his presidency as of today. He's not doing well. He knows that. And so he's going full insurrectionist," Carlson said. "He's questioning the legitimacy of the upcoming midterms."

"He wants to stop the steal," Tucker Carlson laughed.

In a Wednesday press conference when asked by a reporter if the upcoming midterm elections will be legitimate if the administrations 'Voting Rights' Bill doesn't pass through legislation, President Biden said the opposing side is trying to "alter the outcome of the election."

Tucker Carlson noted that in addition to President Biden's comments, Vice President Harris made accusations that Republicans are trying to "steal" US elections, as did congressman Jim Clyburn (D-South Carolina).

"Questioning the legitimacy of our elections. Doing to bidding of Putin. Where's Liz Cheney?" the Fox News host asked. "She is always on the hunt for insurrectionists undermining democracy."