This isn't the first time Gabbard voiced frustrations with the unequal treatment of those involved with the Jan. 6 Capitol riots versus intelligence officials. 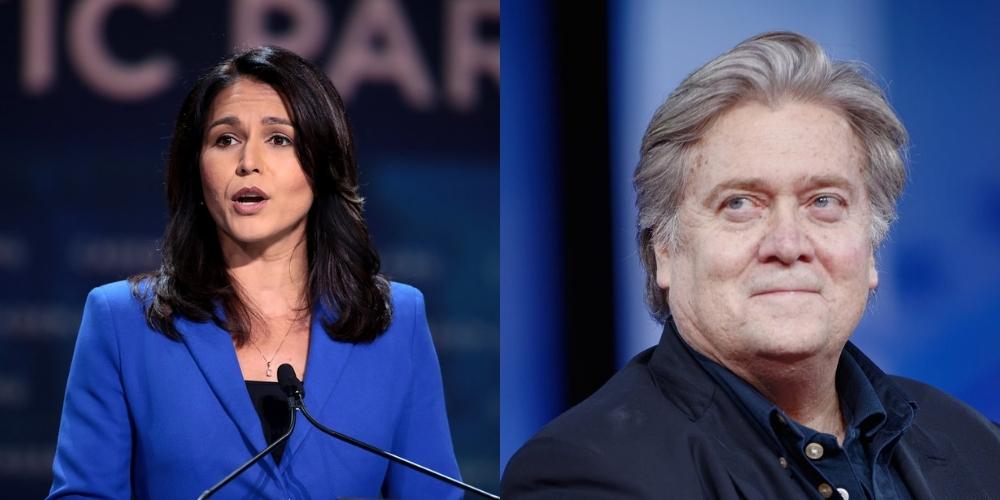 Former Hawaii congresswoman Tulsi Gabbard (D) posted a fiery statement to Twitter Saturday morning, showing her contempt for the Biden administration and the "elite" for "shamelessly weaponizing law enforcement into a political hit squad" following the conviction of Trump-ally Steve Bannon for contempt of Congress.

Steve Bannon, the former White House chief strategist under the Trump administration, was convicted on two charges of contempt of Congress after a federal jury found him guilty for ignoring a subpoena from the House Jan. 6 Committee on Friday. The two misdemeanour counts each carry a minimum of 30 days and a maximum of one year in jail, in addition to a fine of $100 to $100,000, reported Axios.

Bannon is the first close Trump adviser to be convicted resulting from the House committee's probe into the affront on the U.S. Capitol last January following Trump's election loss.

In March 2013, Senator Ron Wyden (D-OR) asked Clapper under oath if the federal government was collecting "any type of data at all on millions or hundreds of millions of Americans." Clapper replied, "No, sir. … Not wittingly."

"Nothing could be further from the truth," Brennan said in response to Feinstein's allegations. "We wouldn’t do that. That’s just beyond the scope of reason in terms of what we’d do."

Months later, The New York Times reported "An internal investigation by the C.I.A. has found that its officers penetrated a computer network used by the Senate Intelligence Committee in preparing its damning report on the C.I.A.’s detention and interrogation program."

This isn't the first time Gabbard voiced frustrations with the unequal treatment of those involved with the Jan. 6 Capitol riots versus intelligence officials.

"The mob who stormed the Capitol to try to stop Congress from carrying out its constitutional responsibilities were behaving like domestic enemies of our country," Gabbard said in a Twitter post a few months after the affront on the Capitol building.

"But let us be clear, the John Brennans, Adam Schiffs and the oligarchs in Big Tech who are trying to undermine our constitutionally-protected rights and turn our country into a police state with KGB-style 'surveillance' are also domestic enemies — and much more powerful, and therefore dangerous, than the mob which stormed the Capitol."