"It seems that UW Medicine communications staff intentionally kept the corrections to the study quiet. They were looking for positive coverage," observed Rantz. 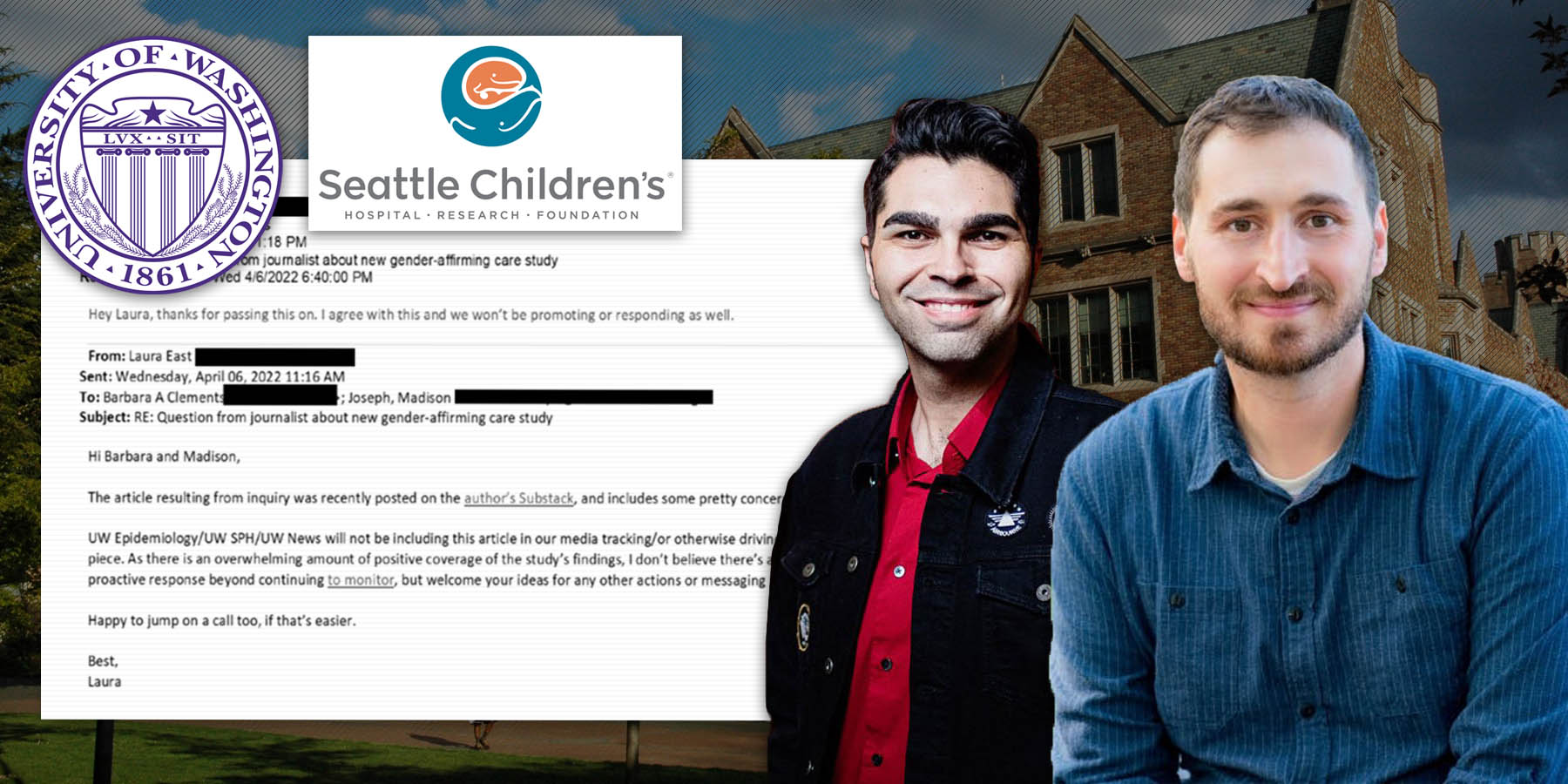 Researchers at the University of Washington found that the use of puberty blockers and hormones didn't improve the mental health of trans-identified teens, but published a study claiming they did.

Internal emails obtained by Jason Rantz reveal that when the researchers were caught, officials at UW Medicine and Seattle Children's Hospital advised each other against correcting the misinformation they put out.

However, the data shows there was virtually no improvement in mental health outcomes for the patients receiving gender-affirming care. The press release, which was picked up by press outlets, was incorrect.

Independent journalist Jesse Singal published a thorough critique of the study in April, identifying its every flaw and dubiously drawn conclusion.  When Singal asked the researchers for the raw data, the study's author stopped responding. Similarly, when Singal reached out to UW Medicine spokespeople, he was also denied the data.

According to emails exclusively obtained by the Jason Rantz Show between UW Medicine and Seattle Children’s Hospital, UW chose to ignore the concerning claims Singal made about the study because they had already received positive media coverage.

Department of Epidemiology spokesperson Laura East was concerned about the allegations made in Singal's report and wrote in an email to her colleagues at UW Medicine and Seattle Children’s that she wouldn’t promote the study.

"The article resulting from the inquiry was recently posted on the author’s Substack, and includes some pretty concerning claims. UW Epidemiology/UW SPH/UW News will not be including this article in our media tracking/or otherwise driving traffic to this piece," said East.

While Singal's report was concerning enough to stop UW from promoting the study, they did not see a need to correct the misinformation which had received positive media coverage.

"As there is an overwhelming amount of positive coverage of the study’s findings, I don’t believe there’s a need for a proactive response beyond continuing to monitor, but welcome your ideas for any other actions or messaging with the study team. Happy to jump on a call too, if that’s easier," East continued.

A spokesperson for UW Medicine forwarded the email to the UW Medicine Communications Manager.

"FYI, I read through his exceedingly long (very, very long) article," Barbara Clements wrote to Susan Gregg, "which claimed the research was flawed or, at worst, made up, but given the extremely positive pick up by mainstream media, I would agree and just let this be."

Clements replied to East in agreement that "we won’t be promoting or responding as well."

Madison Joseph, a communications specialist for Seattle Children’s Hospital was included in the email thread discussing the concerns.

"If the Seattle Children’s team gets any inquiries on social and/or through our press inbox, we will continue to not engage," Joseph wrote.

Dr. Kym Ahrens, one of the study's authors and an Assistant Professor in the Division of Adolescent Medicine at Seattle Children’s Hospital and UW Medicine was included in the email chain. Ahrens said, "Also, if it gives too much attention to clarify at all, I am also very open to not responding."

Joseph of Seattle Children’s responded, "In my opinion, Jesse [Singal], and the reporters reaching out, all have an agenda, so anything we say will just add fuel to the fire."

She added, "I think a short, to-the-point note, like 'UW and UW Medicine stand behind our researchers and the JAMA study' is fine, but I wouldn’t go beyond that."

The UW Medicine communications team quietly edited the materials used to promote the study. The press release page on the UW Medicine website changed the line claiming that "depression rates had plummeted" to "UW researchers recently found that gender-affirming care for transgender and nonbinary adolescents likely decreased rates of depression and suicidality."

An email from the study team told the communications staff via Laura East, that additional edits were required.

"I think it is important to note that this language is still not quite accurate. We did not observe a decrease in the rates of depression. We saw that youth who initiated PB/GAH has a lower odds of depression compared to youth who didn’t because depressive symptoms significantly worsened among youth who did NOT initiate PB/GAH. These are different (and has been particularly hard nuance to maintain re: science comm for this study). I think 'mitigate' is an appropriate word to use instead of decrease."

The Jason Rantz Show reached out to UW Medicine for comment. A spokesperson confirmed that staff never reached out to media outlets to correct the misinformation.

"UW Medicine did not proactively reach out to any media outlet to correct the information, however, we made the correction to our newsroom website and called out that a correction had been made," the spokesperson said via email.

"When we distribute press releases on research conducted at UW Medicine, we always link to the original research within the release so that media not only see how we presented the information but have access to the source information. We appreciate that the error was brought to our attention so that we could make that correction on our website and provide the updated language to any media who inquired about the study from that point forward."

Rantz noted that the corrections to the press release occurred on April 8, but the original press release was sent on March 11. "How would media outlets that originally covered the study know that corrections were made?" said Rantz.

Rantz speculates that the team agreed not to issue a correction for political purposes. "It seems that UW Medicine communications staff intentionally kept the corrections to the study quiet. They were looking for positive coverage," observed Rantz.

"As Singal argues (and I agree), one of the authors misrepresented the study. Why?" asked Rantz. "I think the team wanted the study to support gender-affirming care. It would allow them to push back at what they believe is 'anti-transgender' legislation they disagree with," he concluded.