Weingarten, who didn't even know which way was up on a Ukrainian flag several months ago, said "As Putin tries to take a blowtorch to democracy, we stand in solidarity with the educators, students and families in Ukraine." 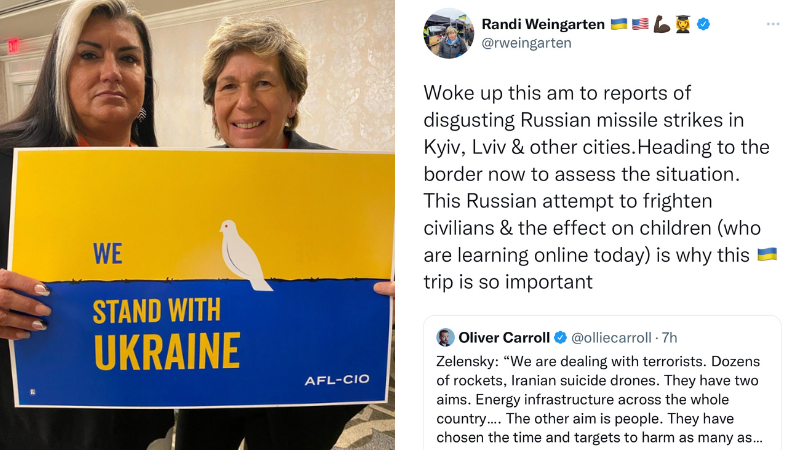 The Post Millennial
Oct 10, 2022 minute read
ADVERTISEMENT
ADVERTISEMENT
American Federation of Teachers President Randi Weingarten is in Ukraine, reporting back on the intensifying conflict between the Russian invading forces and the nation of Ukraine. The stated goal of the trip was to "donate school supplies" and "deliver assistance" to Ukranian teachers, and was made after being invited to do so by the Ukrainian teachers union.

Weingarten, who traveled to Ukraine this week, shared that she "Woke up this am to reports of disgusting Russian missile strikes in Kyiv, Lviv & other cities." Weingarten explained that she was "Heading to the border now to assess the situation," and that "This Russian attempt to frighten civilians & the effect on children (who are learning online today) is why this trip is so important." This comes after Russia launched missiles into the western region of Ukraine.

Weingarten, who didn't even know which way was up on a Ukrainian flag several months ago, said "As Putin tries to take a blowtorch to democracy, we stand in solidarity with the educators, students and families in Ukraine." The plan is to "distribute children’s books and other educational materials at school visits in Lviv," to "meet with refugee teachers," and "to shine a light on Vladimir Putin’s attempt to impose autocracy on Ukraine by targeting schools and civilians."

"They are fighting against Russian aggression to uphold their democracy, their freedom and their self-determination," she went on to say in a release, "and after nearly eight months of conflict their righteous resistance grows stronger each day."


"The war’s effect on kids and families has been brutal, and the Ukrainian teachers’ persistence, compassion and bravery in helping students continue their learning in an active war zone should be lifted up and championed," she said.

Weingarten faced backlash for the trip on social media, with users claiming that the junket was pointless, a lobbying effort by Ukraine to get the US to further enter the war, and that American students should be the focus of her efforts.

Weingarten's previous trip to the region was in April. "Our visit will shine a light, not only on the impact of Putin’s war, but on the persistence, compassion and bravery of the teachers dedicated to protecting and helping their kids learn amid Russia's heinous attack, wherever they might be in the region," she said at the time.

Meanwhile in the US, decades of academic progress for Americans students have been erased. Weingarten pressed for schools to remain closed during the pandemic, for students to stay in face masks, making it harder to learn, insisted on vaccine requirements for students, and praises teachers who teach critical race and gender ideology.
ADVERTISEMENT
ADVERTISEMENT
weingarten ukraine