New footage clearly shows California gubernatorial candidate Larry Elder and a supporter greeting each other with a warm embrace. 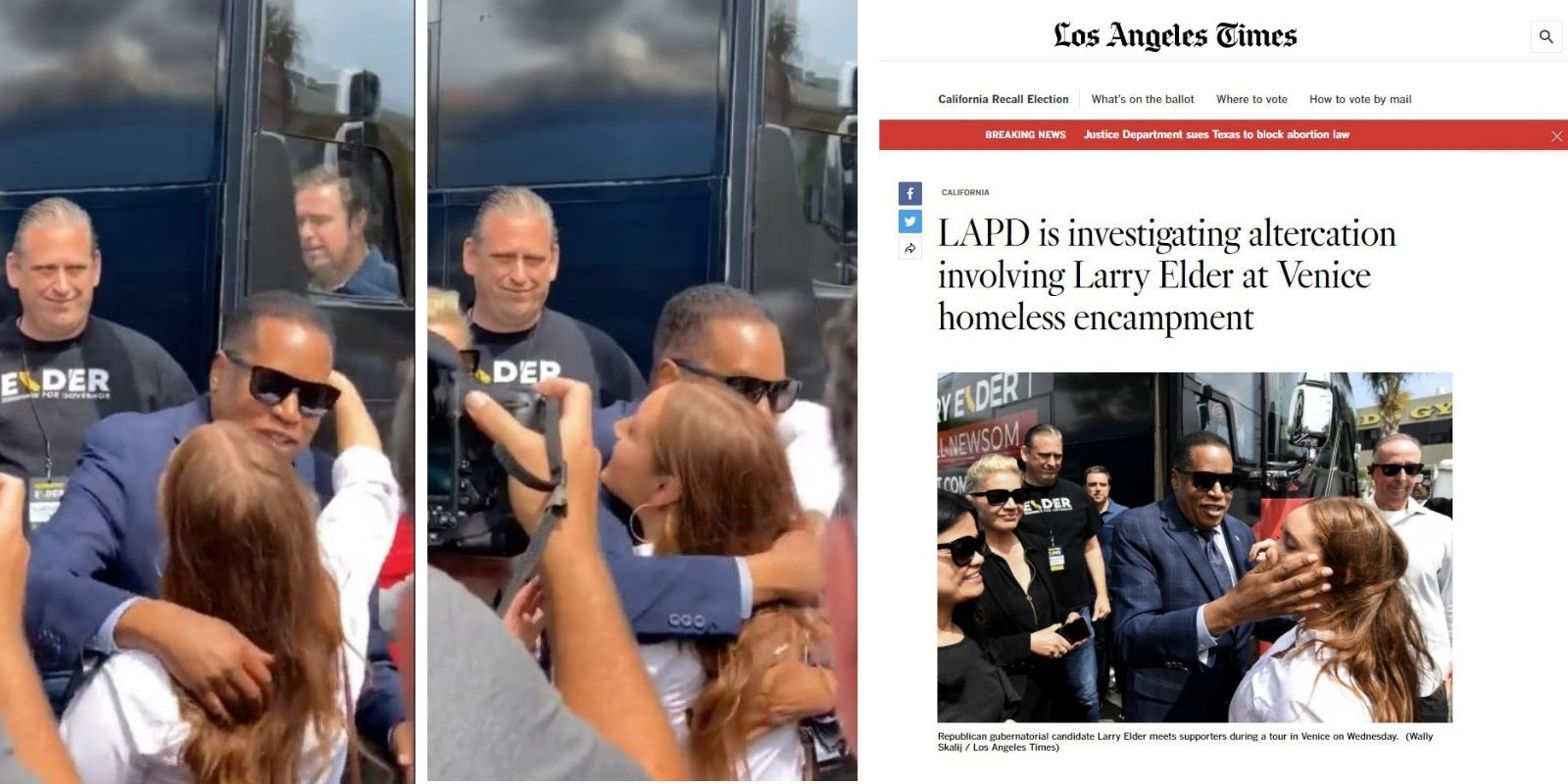 "And here is the video showing me and @larryelder hugging upon his arrival in Venice. He did not slap me as @latimes headlines/photos have implicitly suggested," commented Venice Neighborhood Council member Soledad Ursua.

Shouts of "Larry!" and "Welcome to Venice!" roared at Elder's amicable reception and photo opportunity while he deboarded the "Recall Express" bus Wednesday.

Los Angeles Times had published the misleading photo with an accompanying headline that implied that Elder, a black Republican, slapped Ursua at the Venice homeless encampment campaign stop where he was attacked.

The LA Times article dated Sept. 9 reports that the Los Angeles Police Department is now investigating the attack on Elder. The headline entitled paired with the notorious photo of Elder touching Ursua's face, frames the GOP contender as the instigator in the unspecified "altercation involving" Elder.

Elder, however, is the victim of the assault in question. Both the headline and the story's promotional tweet failed to mention that the black Republican was attacked by a white assailant wearing a gorilla mask who threw eggs at Elder while he was walking along the encampment-lined 3rd Avenue in Los Angeles.

Ursua corroborated Elder's account when she took to Twitter to expose the Los Angeles Times in a series of tweets calling out the slanted journalism.

She said that Elder was her guest at the time when the group was attacked by hecklers harassing the campaign team with a slew of "racial epithets."

"Yet @latimes finds a deceiving pic of us about to hug to confuse the story- a HATE CRIME was committed against a black man running for Governor of CA," wrote Ursua, a community officer on the neighborhood council's general board, according to its website. "Why would you use such a misleading photo that makes it look like @larryelder is slapping me? He was the victim of a hate crime yesterday by a white woman wearing a Gorilla Mask. This is outrageous," Ursua tweeted in response to Los Angeles Times metro reporter Julia Wick, the report's author.

Los Angeles Times had since scrubbed the photo after significant backlash online. The stealth-edited article now features an image of Elder in the foreground escorted away from the gorilla-masked attacker pictured in the far-right corner.

"This is completely absurd," Elder's communications director Ying Ma told the Daily Caller. "Larry went to give a supporter a hug and the LAT used a photo taken at an angle that made it appear as if he was hitting her."

The liberal newspaper also downplayed the racist attack against the black conservative as "a hostile reception" in a previous Sept. 8 article on the confrontation. Los Angeles Times is well aware that ape characterizations "have been used as a racist trope for centuries," because it's noted in the subsequent Sept. 9 report. However, the California paper buried the lede, only describing the attack in the second graf and the race and costume of the assailant in the fourth.

Ursua, the Venice neighborhood council's Public Health & Safety Committee chair, told The Post Millennial that she does know why the LA Times has still not issued an apology. "I also do not know why no elected official has denounced this," Ursuea said, naming only Los Angeles County Sheriff Alex Villanueva has condemned the attack. "Not a peep from our city councilmembers," Ursua added.

"There must have been hundreds of photos to choose from. When he got off the bus we hugged. Why not a picture of us hugging? Instead they used a weird angle that makes it look like he had assaulted me. I am so disappointed and this has been so emotionally draining," Ursua said in an email statement Friday.

Ursua, a mother and teacher, told the California Globe that she and another event attendee, fellow Venice Neighborhood Council community officer Chie Lunn, felt targeted, because they're both the only women of color on the Venice council.

"We don't know if those eggs were meant for both of us standing next to him, or for him," Ursua said to the local news site. "The protestors called us 'f—ing whores,' and 'f—ing bitches,' and the N-word to intimidate us." Ursua and Lunn have now filed police reports with the LAPD demanding the case be filed as a hate crime.

LAPD has launched a battery investigation after an Elder security guard was punched during the campaign event, ABC 7 News reported. The bicycling woman in the pink gorilla mask had "struck the aide on the left side of his face with her open hand," according to the LAPD. Another suspect also attacked the same aide, punching the man in the back of the head, just before Elder was whisked away. Elder's security detail was also shot with a pellet gun, the campaign team said. Police are now seeking the public's help in identifying both suspects.

Video of the incident captures eggs being catapulted, the first almost hitting Elder's head. The masked woman was seen in all black steering a bicycle several feet from Elder's left shoulder before launching the initial projectile.

Elder himself has since spoken out against the deafening liberal silence. He told Fox News in a phone interview that if he were a Democrat, the racially-charged attack would be garnering far more press attention and on the radar of social justice activists who would be "screaming about systemic racism."

"There's a double standard here. There was an article in the front page of The New York Times the other day, all negative about me, not mentioning the fact that I'm black, not mentioning that I'd be the first black governor of California," he said.