“Before we have a chance to hear from the Premier, I just want to say, he does not represent me. This is a cesspool of hypocrisy,” the man stated before having the microphone removed away from his face. 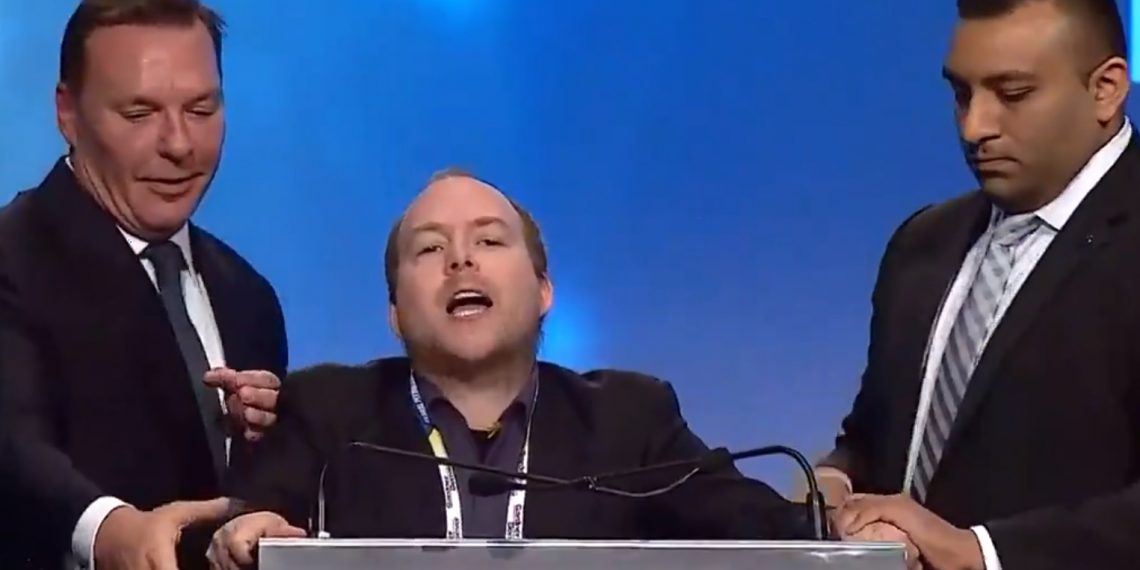 An animated protester jumped on stage to have his voice heard at the Petroleum Show, interrupting a large international pro-oil conference, on Tuesday.

The man quickly hopped on stage and rushed to the podium after Premier Kenney was introduced and had a few things to get off of his chest.

“Before we have a chance to hear from the Premier, I just want to say, he does not represent me. This is a cesspool of hypocrisy,” the man stated before having the microphone removed away from his face.

“It is imperative for all of you to do something!” the man shouted to the crowd after being pulled away from the podium.

“I’m sorry to do this my friends. Your time is important.”

Some in the crowd chanted “let him speak” while others were keen get him off stage, yelling to “get rid of him.”

After the dust settled a bit from the man’s brash interruption, Premier Kenney returned to the stage and up to the podium after the man was removed, telling the audience that opposing voices are always welcome.

“There are very few energy producers around the world where you’d see something like that happen,” said Kenney. “This is a free, liberal democracy with freedom of speech, and we embrace that. Just as that gentleman got his voice shared, Albertans got their voice shared the last election.”

The Global Petroleum show, an event where organizers expected over 50,000 attendees including more than 12,000 international guests from over 100 countries.

The conference will continue from Tuesday until June 13,  with a large pro-oil and gas rally is taking place outside of the show this afternoon.