Violent protests flare across the US over George Floyd's death

Protests over George Floyd's violent death at the hands of Minneapolis police officers on Monday have continued to rock major US cities. 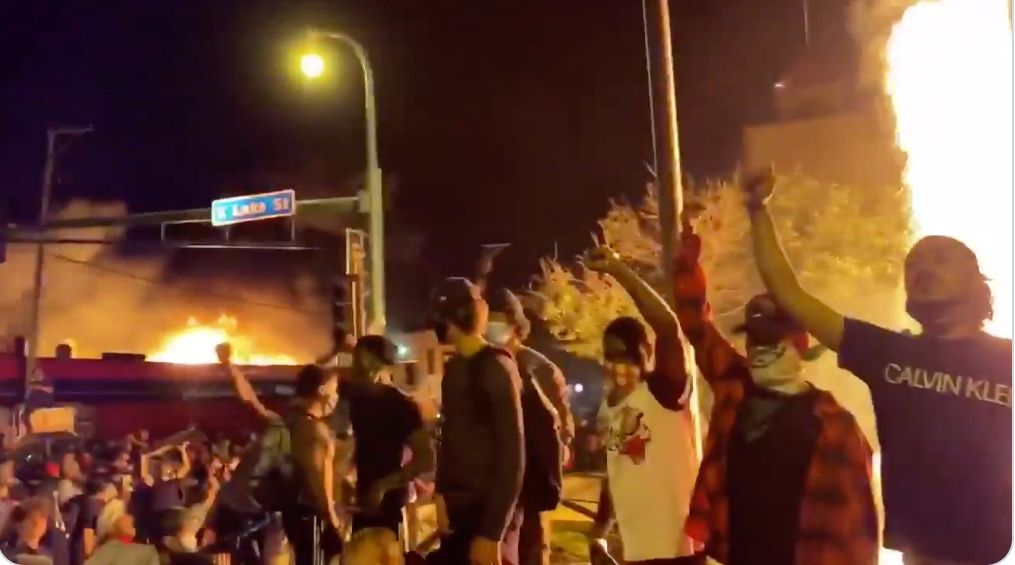 Protests over George Floyd's violent death at the hands of Minneapolis police officers on Monday have continued to rock major US cities. Floyd, 46, was suffocated to death after police officer Derek Chauvin, 44, kneeled on his neck, despite Floyd's pleas that he could not breathe.

By Friday morning, it has become clear that the protests and accompanied rioting have spread across the country.

What began as peaceful protests in Minneapolis on Tuesday quickly devolved into serious riots Wednesday evening, resulting in a number of buildings being burned to the ground and the death of a man.

By early afternoon on Thursday, the riots had migrated to St. Paul, where police officers and rioters had a standoff outside a Target in the Midway neighborhood.

A police station in Minneapolis' third precinct, that had been targeted earlier in the week was eventually taken over by the rioters. It was burned to the ground.

In Columbus, Ohio, rioters stormed the Statehouse building, kicking and throwing items through the window.

In Los Angeles, a group of rioters attacked a police car, smashing the windows before the officer pulled away. One man who had jumped on the vehicle as it was pulling away fell off a few seconds later.

In Louisville, where seven people were shot although fatalities have not been reported, protests rocked the city. It was not just Floyd's death, but Breonna Taylor's that were protested. Breonna Taylor recently lost her life in Louisville, Kentucky, when she was shot by police while she was asleep in bed.

Peaceful protests appeared to be the initial plan in New York City, with participants chanting, "No Justice! No Peace! I Can't Breathe!" This harks back to the protests when Eric Garner was killed on Staten Island in 2014. His daughter, Erica Garner, became a prominent figure in the Black Lives Matter movement.

Memphis, Tennessee has seen a turn out as well. A group of protestors gathered on Union Avenue to peacefully protest the civilian killing Ahmaud Arbery, the police killing of George Floyd, and Breonna Taylor. Others were named as well.

In Denver, the deaths of Breonna Taylor and Sean Reed were protested.

Despite the outrage from protesters and rioters, Floyd's family has urged everyone to peacefully protest. Tera Brown, Floyd's cousin, said that she knew people were angry and that she hoped that justice would be served for what happened to Floyd, but also added that she doesn't want to see "destruction and chaos".

Floyd was reportedly arrested after a cashier called police to report that he had passed a counterfeit $20.

According to a transcript of the 911 call that was released, the caller told the 911 operator that "Um someone comes our store and give us fake bills and we realize it before he left the store, and we ran back outside, they was sitting on their car. We tell them to give us their phone, put their (inaudible) thing back and everything and he was also drunk and everything and return to give us our cigarettes back and so he can, so he can go home but he doesn't want to do that, and he's sitting on his car cause he is awfully drunk and he's not in control of himself."

The caller went on to describe the man's car and gave a brief description, and the call concluded with the operator saying "Alright, I've got help on the way. If that vehicle or that person leaves before we get there, just give us a call back, otherwise we'll have squads out there shortly, okay?"

Protests have erupted across the country in the wake of this killing that was instigated over an alleged $20 bill. Four of the officers who participated in Floyd's death have been terminated from their positions, but charges have yet to be filed by the prosecutor's office. Both Mayor Frey and Governor Walz have expressed their interest that charges be filed against the officers in this case.

Hennepin County Attorney Mike Freeman, under whose jurisdiction this case lies, stated that the video of Floyd's death under the knee of officer Derek Chauvin was "graphic, and horrific, and terrible."

"But my job, in the end," Freeman went on to say, "is to prove that he violated a criminal statute, and there is other evidence that does not support a criminal charge."

Chauvin, it has been reported, has received nearly 20 complaints filed against him over the course of his 19-year career, as well as two letters of reprimand.

Freeman's office clarified that to say that "County Attorney Freeman was saying that it is critical to review all the evidence because at the time of trial, invariably, all that information will be used. Evidence not favorable to our case needs to be carefully examined to understand the full picture of what actually happened."

It has emerged that the office may have had reason to believe that Floyd was resisting arrest. Surveillance video from a local restaurant has surfaces which offers a counter to that story, namely that Floyd did not physically resist.