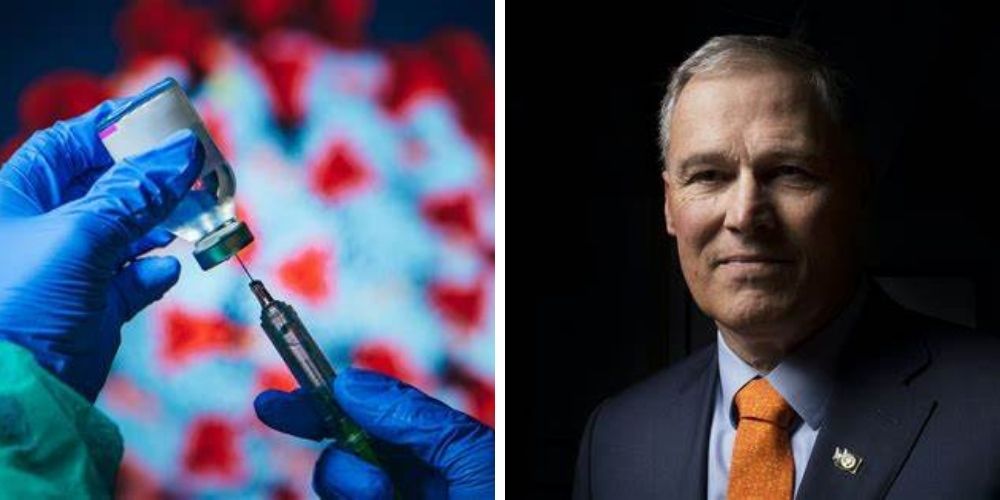 The Washington State Board of Health on January 12 will be receiving a briefing on the progress of the technical advisory group to consider making the COVID-19 vaccine a requirement for children to attend school.

Additionally, the board will also be considering proposed rule changes to that would include COVID under Communicable and Certain Other Diseases as defined by the state, and as such under Washington state law, an individual who fails to comply with a health order issued would be guilty of a misdemeanor.

According to a Jan 5 email obtained by The Post Millennial, "The Board is continuing a November rules hearing on the proposed rule changes to chapter 246-100 WAC, Communicable and Certain Other Diseases, as published in WSR 21-20-127."

"The Board is proposing updating its rules to reflect current state law."

Under the RCWs cited "A person who violates or fails to comply with a health order issued under RCW 70.24.024 is guilty of a gross misdemeanor punishable by confinement until the order has been complied with or terminated, up to a maximum period of three hundred sixty-four days."

The BOH claimed that the agenda item regarding these changes "…is related to rulemaking on chapter 246-100 WAC it is scoped only to the implementation of ESHB 1551 (Chapter 76, Laws of 2020) and does not include changes to isolation and quarantine policies."

The purpose of updating the rules is "…to revise chapter 246-100 WAC to assure consistency with the statutory requirements and protect public health and safety."

"Revisions include, but are not limited to: (1) Establishing reporting requirements and procedures for investigations for sexually transmitted diseases; (2) specifying behavior that endangers the public health; (3) defining specimens that can be obtained and tests that can be administered for sexually transmitted diseases, blood-borne pathogens, and other infections; (4) determining categories of employment that are at risk of substantial exposure to a blood-borne pathogen; and (5) defining what constitutes an exposure that presents a possible risk of transmission of a blood-borne pathogen."

ESHB 1551 which was originally instituted to modernize "...the control of certain communicable diseases," specifically AIDS and other sexually transmitted diseases would be updated to reflect the changes and become broader for what qualifies as a "communicable disease" under the bill.

The passage of the bill by the legislature in 2020 also included defelonizing intentionally exposing someone to HIV.

(a) For a period of time not longer than the longest usual incubation period of the infectious agent.

(b) In a way to prevent effective contact with those not so exposed."

The document also describes the duties of "local health officers" which include "…when necessary, conduct investigations and institute disease control and contamination control measures, including medical examination, testing, counseling, treatment, vaccination, decontamination of persons or animals, isolation, quarantine, vector control, condemnation of food supplies, and inspection and closure of facilities, consistent with those indicated in the Control of Communicable Diseases Manual, 20th edition, published by the American Public Health Association, or other measures they deem necessary based on their professional judgment, current standards of practice, and the best available medical and scientific information."

According to the document, "An order issued by a local health officer in accordance with this chapter shall constitute the duly authorized application of lawful rules adopted by the board and must be enforced by all police officers, sheriffs, constables, and all other officers and employees of any political subdivisions within the jurisdiction of the health department in accordance with RCW 43.20.050."

In September it was revealed that The Washington State Department of Health was recruiting applicants for a new unit called the "Isolation and Quarantine Strike Team," which would pay a salary of between $3,294-4,286 per month.

Ginny Streeter from the Washington State Department of Health told The Post Millennial that, the "People who utilize the state Isolation and Quarantine facility would be those who do not necessarily reside in a specific county." Those would include travelers as well as "people on vessels that have outbreaks on their ships who berth on the Washington Coast."

This would also include "International and interstate travelers who test positive at SeaTac airport may also stay at this facility."

Streeter said the team "will also provide occasional support to local government" and that any individuals who fit into those categories may be transported to this facility. According to Streeter, the program was authorized by Secretary of Health Umair A. Shah.

Streeter said that any decision concerning mandatory isolation and quarantine for travelers would be made by Washington State Democrat Governor Jay Inslee, and not the Department of Health.

Duties for the new Strike Team members listed on the website included:

The Daily Chronicle in Centralia reported in August, that the "…isolation and quarantine facility at Lakeview Inn in Centralia still has capacity and room to serve those in Washington state who don't fall under any city or county jurisdiction."

According to the outlet, the state previously admitted to not communicating with stakeholders of the last-minute move to the Lakeview Inn in Centralia and apologized to the local community and committed to finding options to help the city recover lost lodging taxes due to the department’s occupation of the inn.

Residents also had concerns about those using the facility spreading the virus locally. According to the Chronicle, "Two people have had to be transferred to a local hospital with worsening conditions."

Officials claimed the 40-bed Lakeview Inn was completely voluntary program that served travelers, shipping vessel crews, military personnel, as well as Department of Corrections work-release inmates and anyone else who contracts COVID-19 while traveling through or doing business in Washington state.

Residents are invited to send their comments to the Board at wsboh@sboh.wa.gov

Update: Following publication of this article, the Washington Board of Health issued a 'clarifying' statement reiterating what they had previously written to The Post Millennial in a Jan 5 email cited above and empahsized that "The Board will not take action on this agenda item at the meeting" with regard to including the COVID vaccine as a requirement for attending school.

The BOH also again claimed, as they had in the Jan 5 email, that updating rules and codes "...does not include changes to isolation and quarantine policies nor does it suggest law enforcement be used to enforce any vaccination requirements."