Antifa activists attempted to burn down the Mark Hatfield federal courthouse in Portland, Oregon Thursday night. The building was the site of over 120 consecutive nights of rioting by BLM and Antifa last summer. 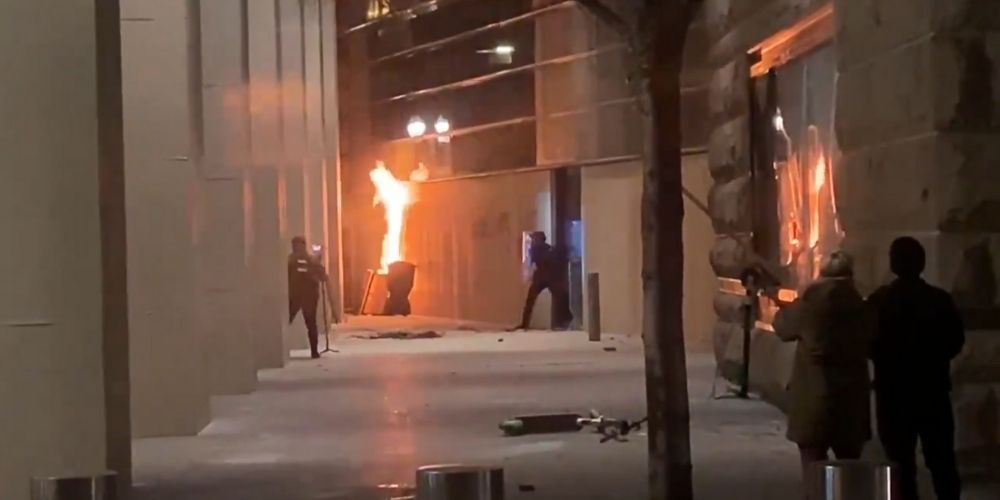 Antifa activists attempted to burn down the Mark Hatfield federal courthouse in Portland, Oregon Thursday night. The building was the site of over 120 consecutive nights of rioting by BLM and Antifa last summer.

Earlier in the day Antifa and other left-wing activists attempted to break into a Chase bank. A lone security guard managed to hold off the mob with his pistol. According to KOIN 6, "Many people held signs, including a large one that read: 'Protect the land, end America.'"

Activists reportedly got nostalgic for the nightly sieges when  passing by the courthouse earlier in the day. After tagging the Chase and a nearby Apple store with graffiti, the protest made its way to Wells Fargo for an encore performance.

A group of 50-60 activists returned to the Hatfield courthouse and engaged in a standoff with federal officers, but members of the mob began vandalizing the area. According to KOIN 6, "Some people set a small fire near the entrance & others are spray painting the building with graffiti."

Jennifer Dowling, reporter with KOIN said she heard loud banging noises which turned out to be the activists tearing down the plywood that has remained on the building since the summer. Activists tore off the plywood in order to break the widows of the building.

Activists spray painted graffiti in the area and set multiple fires. Officers deployed tear gas and flash bangs and ordered the mob away from the building.

Antifa sympathizers and 'streamers' pledged more riots like the ones last summer.

As of publishing at least one person was arrested during the afternoon demonstrations, and another in the evening on the steps of the courthouse. Darby M. Howard (22) resisted arrest and punched an officer in the face which carries charges of 1st-degree criminal mischief and resisting arrest.

Social media posts from Antifa affiliated accounts have been planning a "Direct Action" protest on Facebook and Twitter for the Pearl District on Friday. Robert King, the mayor’s senior public safety adviser, told KOIN 6 that the 'protesters' are made up of "self-described anarchists."

Portland Police Bureau Deputy Chief Chris Davis told KOIN 6, "Protest is fine, that’s not what we’re talking about. With this group, this is a small group that is bent on destroying things. And what they want is a conflict."