WATCH: Antifa militant tries to murder Seattle police officer with a metal bat to the head

The reporter who captured to brutal footage promptly deleted it when she was asked to do so by Antifa Twitter users who claimed she was "endangering protestors." 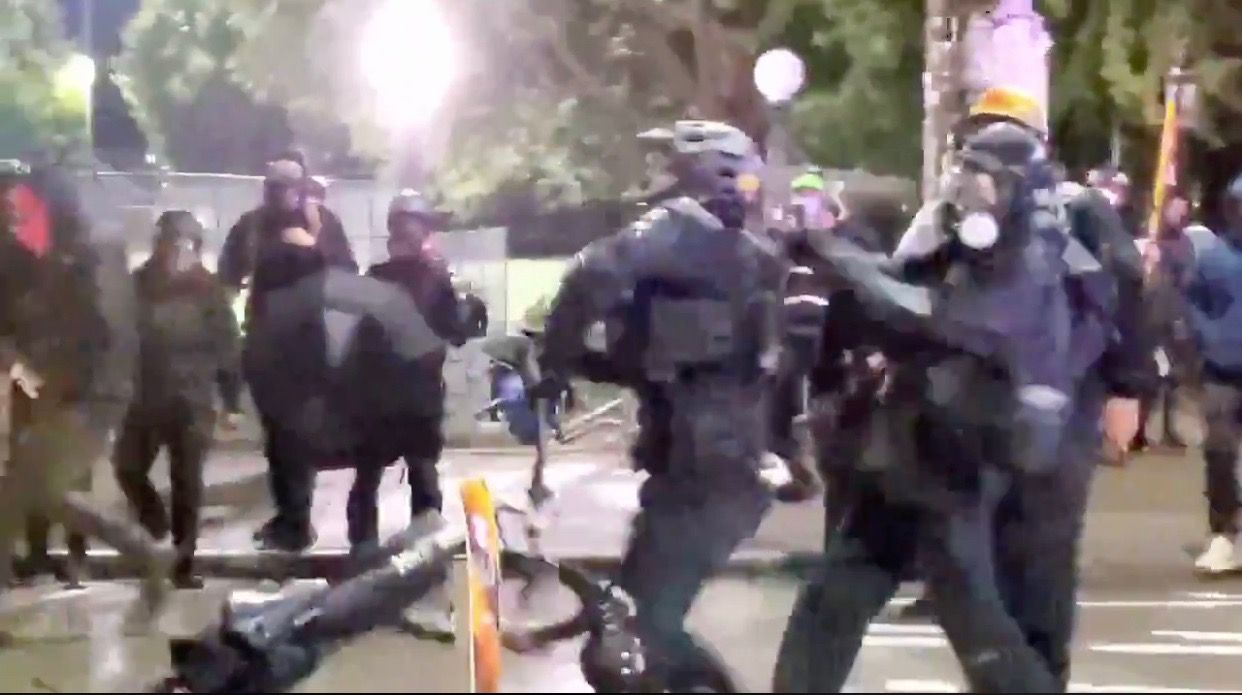 An Antifa militant smashed a Seattle police officer in the head with a baseball bat last night. The reporter who captured to brutal footage, Alexa Villatoro of The Seattle Collegian, promptly deleted it when she was asked to do so by Antifa Twitter users who claimed she was "endangering protestors."

The video shows officers on bicycles riding away from the area, while demonstrators knock one of the officers off his bike. As the officer tries to get up, militants throw traffic cones at him, while people cheer and applaud in the background.

The officer sprays what looks like pepper spray. As he drags his bike away from the scene, a militant comes up behind him with a baseball bat and strikes him firmly in the head. People cheer and scream, one man saying, as the cop retreats, "let's get that f***ing guy, let's get him!"

Antifa militants wanted to protect the person who tried to kill the officer, and the student reporter complied with their requests. After complaints that read "please take this down, very close up (and far) video of faces and identifying clothing is super dangerous" and "Please stop endangering protestors," the college journalist took down the video.

She wrote that "given some critical feedback, I have removed all videos that could compromise identification of protestors. I am not interested in promoting the identities of those who are involved in the demonstrations."

She then thanked the people for messaging her about how dangerous it would be for the criminals in the videos to be seen on camera assaulting an officer with a baseball bat.

Another militant, user name Militant Negress, noted that "There was too much recording tonight. I love seeing pigs get f***ed up and the clips get people hype, I get it. Going forward lets keep it on the ground. Tell your friends that if they want to see pigs in distress they need to be out fighting with us. #seattleprotests"

This militant demands that violent activities should not be recorded or publicized, because they want to commit their crimes without anyone knowing about them. A journalist was cowed into submitting to this notion that those who are committing violent crimes should not be shown doing that, and should not be held accountable for their criminal behaviour.

Villatoro did not delete all of her videos, there are plenty remaining. Seattle police officers can be seen here making an arrest and using crowd control measures while the crowd cries out.

Here officers can be seen on Seattle College's campus while an activist yells "take it to the streets and f*** the police, no justice..."

Here she shows video of officers on bicycles retreating from activists.

Villatoro has scrubbed her feed to show only half of the story, removing actions of demonstrators and militants from the narrative. Anyone looking at these videos would have a hard time understanding just why the police are acting so defensively.

The protestors language of calling police officers Nazis is what stands.