"So, I'm like so deeply rattled, I'm still like processing the end of my life when I come out. And I come out and this man is a Capitol Police Officer. But the story doesn't end." 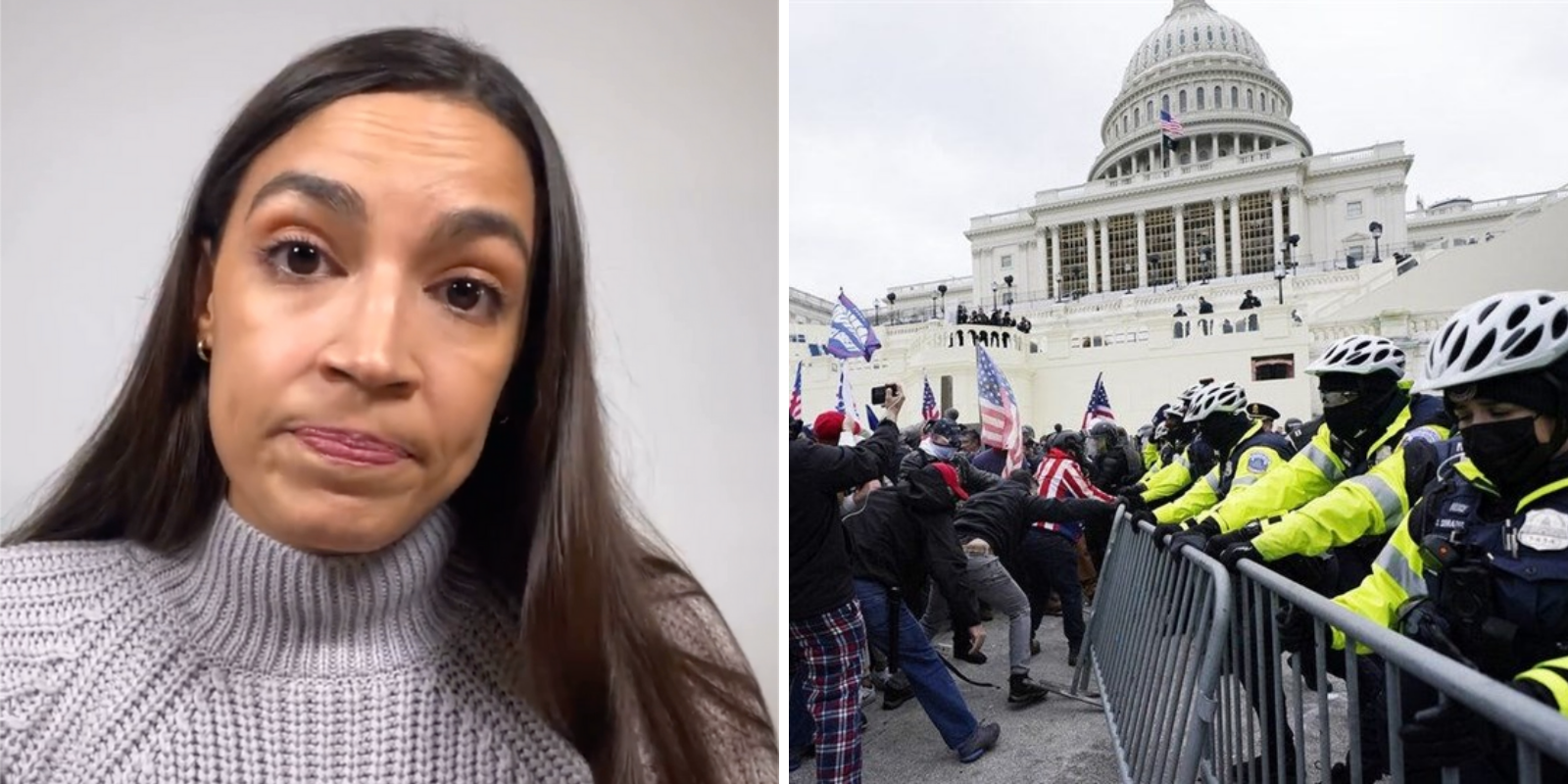 Rep. Alexandria Ocasio-Cortez (D-NY) spoke intimately to millions of viewers in Instagram on Monday night to tell her a very personal story about her experiences during the Capitol Hill riot on Jan. 6, and the lingering trauma she has experienced.

Ocasio-Cortez described the experience of hiding from Capitol Hill rioters in her office's bathroom. "The yells of these men, or just one man, "she said, fighting through tears, "yelling 'Where is she? Where is she?'" It turns out that the man was a Capitol Hill Police Officer, and he was inquiring as to her safety.

"I start to look through the door hinge," she said, giving details. She saw a white man in a black beanie on the other side of the door, and she was terrified. She heard her staffer yell out, saying "hey hey hey hey hey, it's okay, come out."

"So, I'm like so deeply rattled, I'm still like processing the end of my life when I come out. And I come out and this man is a Capitol Police Officer. But the story doesn't end." The officer had no partner, she said, and complained that he didn't identify himself.

"It didn't feel right," she said, because he was looking at me with a tremendous amount of anger and hostility, and um things weren't adding up, there was no partner there, and he wasn't yelling like 'Capitol Police this is Capitol Police.'"

Ocasio-Cortez said that the officer was "looking at me with all this anger and hostility. At first, in my brain and in my mind, I just came from this super intense experience just now, maybe I'm reading into this, right? Like maybe I'm projecting, maybe I'm projecting something on to him that, maybe I'm just sensing anger but maybe he's not trying to be angry, um."

"But I talked to... my legislative director, and he said 'no, I didn't know if he would help us or hurt us either, and [he] was actually like 'this man came with so much hostility, that um" she said. She said that her staffer was "sizing him up" to see if he "would have to fight him."

She compared this experience to "so many other communities in this country where you don't know if you're safe or not." The officer told her where to go, and she said "we're just so rattled in that moment, and the situation felt so volatile with the officer that I run over, I grab my bag, and we just start running over to that building."

Ocasio-Cortez had previously said that she didn't feel comfortable sheltering at the designated evacuation points with others in Congress because she worried for her safety in the hands of her colleagues.

In her view, many members of the GOP, both in the Senate and House, are "using the same tactics as abusers," and she fears that they will "do it again."

"These people remain a present danger," she said of her Republican colleagues. "Because what that tells me is that when given another window of political opportunity for themselves, even if they know that it means that it will endanger their colleagues, they will do it again."

"And that's the real reason," she said, "that I think Senator Josh Hawley needs to resign, why Senator Ted Cruz to resign, along with many others. Because they will do it again."

She said that "these folks who tell us to move on, that it's not a big deal, that we should forget what happened, or even telling us to apologize, these are the tactics of abusers."

She opened up with a revelation that she was a victim of sexual assault, and indicated that this is what gives her perspective into the tactics of abusers. Abusive tactics are what the GOP has been using in the weeks following the riot, Ocasio-Cortez insisted, and called out senators and representatives that she feels should resign. These include Senators Josh Hawley and Ted Cruz, along with Rep. Marjorie Taylor Greene.

Ocasio-Cortez's voice broke as she shed a tear over the difficulties she had experienced due to sexual assault, and she used what she had learned in the aftermath of that experience to explain her current feelings for her Republican colleagues.

She compared the feelings she's experiencing, which she believes is a result of her GOP colleagues, to those others could experience from neglectful parents or other abusers, saying that traumatic "episodes can compound on one other."

"Most people live with trauma," she said, noting that "there is a community of so many people who can understand."

"So when I see a party who cheered on violence, violence that killed five maybe six people," she said, noting that a second Capitol Hill police officer had taken their own life. "When we are still losing people," she said, positing that more people are hospitalized, lost eyes and fingers, and will develop PTSD.

Speaking of the GOP, she said "these people are just trying to tell us it's not a big deal. And they're trying to say 'you're making too big a deal over it.' Or, my favorite, this past week, Ted Cruz and now representatives Chip Roy and oh by the way some of the other representatives who actually encouraged people to threaten members of Congress, or tweeted out the location of the Speaker are now telling me to apologize for saying and speaking truth to what happened."

She went on to say that she "struggles with the idea of being believed," due to being a victim of trauma. "The reason why I think it is important to hold this to account is that because if we know that if we do not hold people accountable, what they are asking for when they say 'can we just move on' is that what they are asking is 'can we just forget this happened so that we can do it again, without recourse?'"

Ocasio-Cortez said that this is what is being asked by her GOP colleagues. "Maybe, in some world, Senator Josh Hawley or Senator Ted Cruz or Representative Mo Brooks, would say 'you know what, I was mistaken, I did not fully realize what the impact of my actions was going to be. And now in retrospect I see that it incited something that I never wanted to incite, and for that I am sorry.'"

She decried the Congressmen's lack of apology, and said that they have "doubled-down" and said "I did the right thing, and if I could go back I could do it all over again."

"That tells me," she said, "that these people remain a present danger. Because what that tells me is that when given another window of political opportunity for themselves, even if they know that it means that it will endanger their colleagues, they will do it again."

"And that's the real reason," she said, "that I think Senator Josh Hawley needs to resign, why Senator Ted Cruz to resign, along with many others. Because they will do it again."

Ocasio-Cortez was in the Capitol Building at the time it was stormed on Jan. 6, and has spoken to viewers on Instagram multiple times about her experience of that day.