Under cover of darkness, "about a hundred people, mostly teenagers," exit planes onto the tarmac at Westchester County Airport, Tucker Carlson reported. 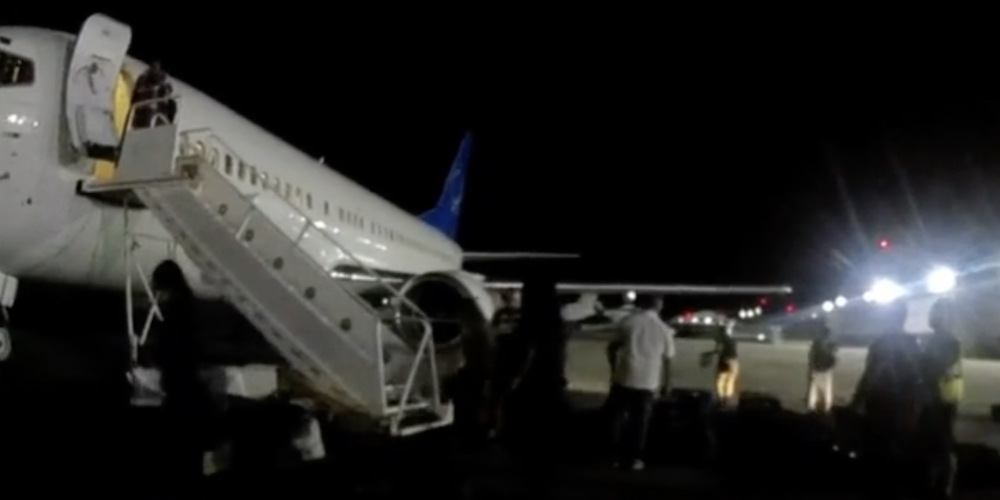 Tucker Carlson aired footage on Wednesday night that showed illegal immigrants being unloaded from planes in Westchester County, New York. The footage came from police body cams from officers who were at the scene providing security.

Under cover of darkness, "about a hundred people, mostly teenagers," exit planes onto the tarmac at Westchester County Airport, Carlson reported. The illegal immigrants were then transported from the airport on buses.

The footage is from August 2021 and was obtained via a Freedom of Information Act request by gubernatorial candidate and former Westchester County Executive Rob Astorino.

The footage shows the airport, 35 miles north of New York City, and Westchester Police Sgt. Michael Hamborsky asking federal contractors what's going on, pointing out that despite being in charge of security, the police weren't given all the details of the situation.

Carlson explains that illegal immigrants are transported to smaller airports rather than the nation's major ones in order to avoid visibility or the heavy security that accompanies those larger transit hubs.

"The government is betraying the American people," Tucker Carlson said on Wednesday while discussing the footage with Rob Astorino. "That is true. The Biden administration is changing this country without your consent. It's a crime and it's immoral."

"A lot of this is just down low stuff that we don't tell people," he continues, "because what we don't wanna do is attract attention; we don't want the media. We don't even know where we're going when they tell us."

Another contractor offered his take on the situation. When asked by Sgt. Hamborsky why this was happening, he responded by saying, "You know why, look who's in office. That's why, come on."

"You know why?" the contractor said. "Because if this gets out, the government is betraying the American people."

Astorino gave his take to Carlson. "Our government is completely out of control right now. They have lied to us. They've lied to the American people."

He then highlighted recent reports that men at the southern border are "getting into cabs and being put into communities," suggesting that the same thing is happening in New York, but with planes.

Astorino claimed the flights arriving in the darkness of night was a deliberate attempt to keep it out of the public eye, then went on to say that he had personally seen a bus of migrants from the airport be dropped off at a local Costco, then released into the community.

According to Fox News, around 2,000 children were flown to Westchester Airport between June and October of 2021. Astorino, however, said the suggestion that the people in the video were all kids was "completely a lie."

"So it is a complete breakdown of our system," he added. "It is a betrayal, as that gentleman said, a betrayal to the American people."

Astorino also slammed New York governor Kathy Hochul, suggesting that she was "complicit," and "turning a whole blind eye" to the situation.

The Biden administration has faced criticism from across the political spectrum for its handling of the southern border crisis, and many are calling for an explanation of what happened in Westchester and in communities across the nation.