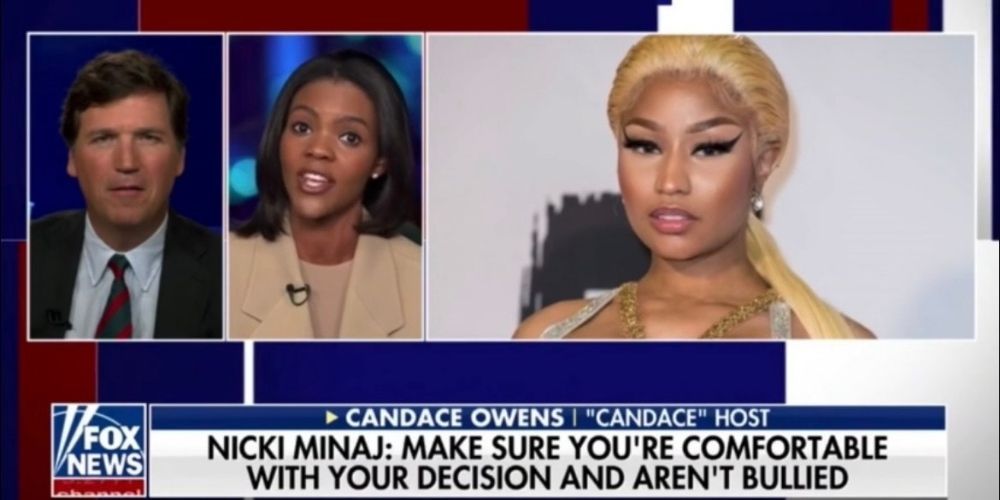 Conservative commentator Candace Owens joined Fox News' Tucker Carlson on Tuesday to discuss the left's political outrage in response to rapper Nicki Minaj's tweet about deciding to get the COVID-19 vaccination after she does more research.

On Monday evening, rapper Nicki Minaj tweeted that she wasn't attending the 2021 Met Gala because she wanted to do more research on the coronavirus vaccine, a requirement to attend the event, and insisted she wanted to stay home to care for her small child. However, the singer thinking for herself sparked outrage among progressive's that are anti-medical choice.

Owens explained that the "Starships" rapper encouraged her audience to do their own research and to decide for themselves on what medical procedures they choose to get, instead of being "bullied" into it.

"If scientific debate was allowed in the ministry of truth, that would be okay, but it's not allowed. Right. They're actually making a very dangerous mistake because people like Nicki Minaj, they know that she's not a part of the political class. They know that she's actually a person that has worked hard, has come from nothing, and is just honestly having a conversation like she always does through her music," Owens said.

"So they're actually playing a dangerous game that will likely create more of a vaccine hesitancy because they're taking down someone that they love for no reason. She's not against the vaccine in any manner whatsoever," the Daily Wire host explained. "On the other hand, I think that they're exposing themselves to be what they are. Again, the ministry of truth."