"Critical Race Theory is calling everything you want to control racist until you control it. So if they call you a racist, all that means is they want to control you," Lindsay said at TPUSA's Defeating the Great Reset. 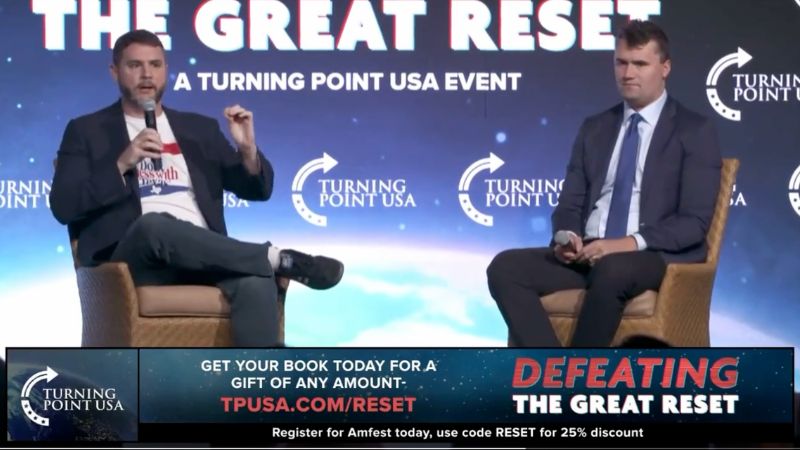 Joshua Young Youngsville North Carolina
Sep 17, 2022 minute read
ADVERTISEMENT
ADVERTISEMENT
Turning Point USA founder Charlie Kirk sat down with author, mathematician and cultural critic Dr. James Lindsay for a conversation on Saturday at TPUSA's Defeating the Great Reset event where they talked about how the mind virus of wokeism has exploded since 2020 and has tried to seize as many cultural institutions as it can in its quest for absolute control.

Kirk described how, in the past, conservatives were not "taking seriously this takeover of every major institution of our children, of education, of finance, of sports, of language" by wokeism, "and then 2020 happens."

Kirk describes how conservatives were especially taken by surprise, and in the wake of the Left exploiting George Floyd's death "all of a sudden everything was about race. It was about structural inequity, oppressor versus oppressed."

"And we are still living through the damage that was implemented from the summer of 2020," the TPUSA founder clarified.

"They saw their moment. To change curriculum, implement textbooks, take over HR departments, be able to change hiring practices, affirmative action quotas, they saw a 90 day window when everyone was locked down and cooped up took over the entire PR narrative," Kirk added.

Lindsay jumped in to explain how that post 2020 process is a deliberate mechanism with roots in Marxism. He referenced an experiment he, Peter Boghossian, and Helen Pluckrose did that exposed the lunacy of woke academia by getting fake papers accepted in leading journals and how it articulated and revealed how wokeism is a mind virus the Left wishes to make into an epidemic.

The peers and community of woke professors said "the ideal metaphor for what they do is a virus."

Both men agreed one of the tools the left uses in spreading its woke virus is its weaponization of race, especially how it capitalizes on white, liberal, guilt.

Because of its roots in Marxism and its goals for top down control and societal engineering, the tool extends into radical gender theory as well.

"That's all it means. If they call you a homophobe, transphobic, that's because they want to control you. And so a lesson to practice, and you do want to have a little bit of savvy, but the thrust of the right answer is: so what?"

Lindsay and Kirk agreed that the purveyors of woke ideology want you to respond with "oh, but I have a black friend" but advise against it. Instead dive right in and tell them, as Lindsay said, "you can't control me that way. I'm not a racist. But even if I were, How am I wrong?"

What would it matter so long as you focus on the idea of the argument.

Kirk explained how another tool would be to turn it back around on them, call them the "bigot" and back it up with an example.

"Oh really, diversity is our strength?" Kirk said, "How did Martha's Vineyard work out?"

Kirk's reference was to Democratic elite in Martha's Vineyard who had the National Guard remove 50 illegal immigrants that Ron DeSantis migrated to the region.

Toward the end of the talk Lindsay called wokeism a "demented, upside down, perverted religion" that has been designed to become a "totalising ideology" and both men doubled down on its roots in Marxism.