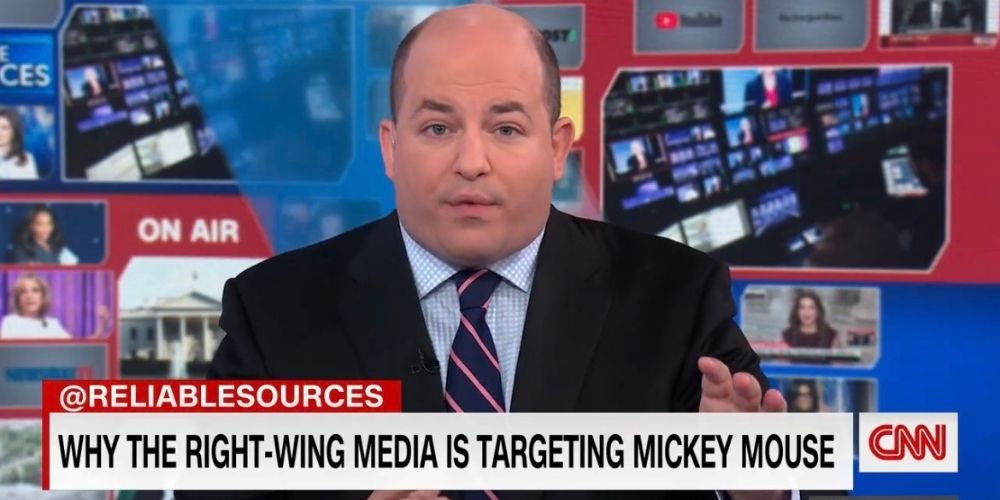 "In the United States, we're seeing a theme of the midterm elections emerging, it's the way you can see a wave start to form far from shore before it breaks on the beach. The theme, the talking point on the right, is about protecting kids from the dangers of The Walt Disney Company," Stelter said. "Really."

"But Disney is just a stand in. It's just a symbol for something bigger, a conservative backlash to grow in acceptance of gay and transgender people, a conservative fear that traditional beliefs are being trampled on, and their entire networks that programmed to this fear and many politicians that react to it. That's the story here," the Reliable Sources host remarked.

Stelter went on to quote a CNN article which alleged that lawmakers and dozens of states are out to "limit the rights of LGBTQ Americans" through a series of bills, including Governor DeSantis' "parental rights bill" which opponents say are "anti-gay bills."

"For folks who aren't partisan warriors, this battle is incredibly disheartening. I spoke with a Disney executive who's caught in the middle of it right now. And they said, you know, Disney's brand for decades has been family friendly and has been gay friendly. And that hasn't been in conflict, that need not be in conflict. But the media organs that profit from conflict are on a crusade now. Working overtime to demonize Disney claiming the company is indoctrinating and sexualizing children through movies and TV shows."

"The main prompt this winter was Florida's parental rights and education bill cast by critics as the 'Don't Say Gay' bill. Disney CEO Bob Chapek ... tried to sidestep the politics at first by not publicly opposing the bill, although Disney was working privately with lobbyists to try to water it down. Chapek's lack of a public opposition sparked an internal revolt by LGBTQ employees and allies, causing Chapek to apologize and publicly oppose the bill and put Disney's weight behind the bill," the CNN host explained.

"This has snowballed from there, with Florida Governor Ron DeSantis labeling Disney as woke and the right-wing media backing him up and celebrating him. Some activists even called for boycotts of Disney and now GOP lawmakers and media stars are threatening Disney's copyrights and special self governing status. In the past week, Fox News has talked about Disney hundreds and hundreds of times. And the mentions really ticked up after the same conservative activist who hyped concerns about critical race theory last year, shared a leaked video of Disney executives talking about diversity, equity and inclusion," Stelter said.

"It was deemed scandalous that some producers at Disney want to include more LGBTQ characters and storylines in shows."