"What you see here is that the Jussie Smollett operation and the FBI operation, when you think about it, are the same operation. In both cases…this is an effort to manufacture evidence and create a narrative. It’s a false narrative." 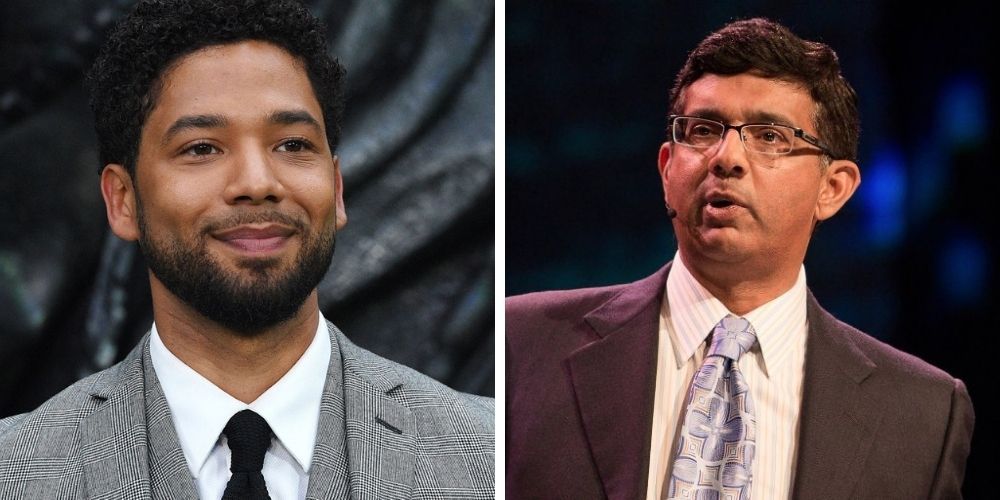 Conservative political commentator Dinesh D'Souza compared the Federal Bureau of Investigation (FBI) to hate crime hoaxer Jussie Smollett on Friday, after recent reports indicate that the FBI may have been responsible for orchestrating and instigating terror operations in the US.

"What you see here is that the Jussie Smollett operation and the FBI operation, when you think about it, are the same operation. In both cases…this is an effort to manufacture evidence and create a narrative. It’s a false narrative," D'Souza said.

Recent reports suggest that the FBI is at the forefront of plotting incidents of racial terror and then "solving them" in order to "foster a false narrative for which there is no actual evidence," D'Souza explained.

Jussie Smollett, a black actor, orchestrated a hate crime hoax in Chicago back in January of 2019. Smollett claimed that a group of MAGA hat-wearing Trump supporters attacked him in the streets of Chicago, telling police and the public that the men shouted racist and homophobic slurs at him while placing a noose around his neck.

Conservatives immediately expressed skepticism about Smollett's claims. The skepticism turned out to be justified, as it was later revealed during a police investigation that the alleged hate crime targeting Smollett was a hoax. Two men, both of whom were black, admitted to being paid by Smollett to beat him up in order to fabricate a hate crime.

"I don't have any problem, I don't think anyone does with the FBI genuinely infiltrating terror plots," D'Souza said. "Let's say the FBI found out there's a plot going on. Okay. Get your people into it, get your informants or get your operatives, do penetrate the plot, observe the plot, record the plot then right before the plot occurs, or maybe even in the process of having it appear, have the FBI show up, bust the plot, or prevent the plot from being carried out and hold accountable the perpetrators."

"The FBI decides let's pose as white supremacists. There may not actually be any white supremacists at the January 6th, but we will be in the white supremacists, we’ll show up. Let's organize the scheme. Let's plant the idea. Yeah. "Hey guys, let's take the capital." And then when some of the guys go, "Well, I don't know how we're going to do that. It's well heavily guarded. No one can just walk into the Capitol." You basically say, "Well, here are the ways we do it. Here's how we can get around it."

"You motivate the people to do this. You tell them that you're right there. You're going to be helping them. You're going to supply them with the things that they lack. And then in cooperating with them, you bust the scheme that you created. You established the false narrative that wouldn't otherwise have been established," D'Souza added, host of the Dinesh D'Souza podcast.

"The FBI seems to have learned how to pull off these framing tactics and these lies," D'Souza said.

"It's kind of dismaying at a certain level that the top police agency in a free society or largely free society, or is still perhaps free society, is so thoroughly corrupted that you cannot trust it to do anything."

"Our confidence in this agency literally needs to be at the point of zero. Believe nothing that they say, It's kind of the same as with the media," D'Souza commented. "Don't believe anything they say, even if it's true."

"Because there are so many lies intermixed with the truth that it's going to be too much trouble for you to disentangle one from the other. When you're dealing with known liars, treat them as such, they're all a bunch of Jussie Smollett's."